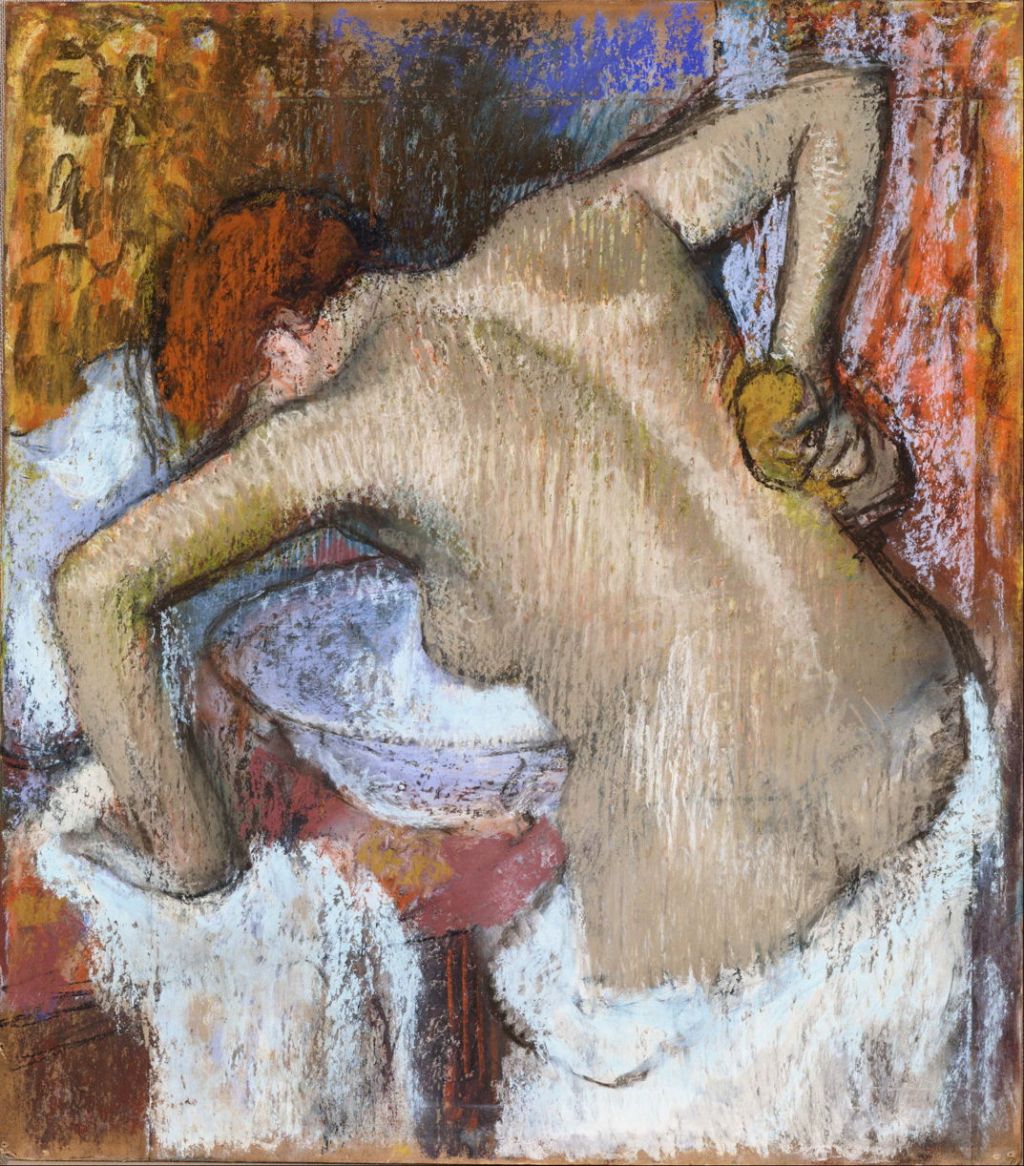 Another of the major themes running through the work of Edgar Degas is that of a woman bathing. Its origins go right back to one of his earliest surviving paintings.

Degas is believed to have started to paint Candaule’s Wife in about 1855-56, when he was still a student, and before he went to Italy. Although he abandoned it soon afterwards, and never completed its narrative content, the figure of Queen Nyssia undressed and ready to get into bed could equally well have been bathing, getting out of a bath, or drying herself afterwards.

Another recurrent activity which appears in his later work is the combing or brushing of hair, which was the theme of Women Combing Their Hair painted in about 1875-76, although these three figures are dressed in chemises (shifts).

Degas’ first painting of a woman bathing followed in about 1876. In the 1880s, this theme came to dominate many of his works, perhaps to the point of obsession.

Woman Drying Herself after the Bath is painted in pastel over a monotype, and has been proposed as being one of his first works showing a woman bathing, from 1876-77.

It is one of the few works in this series which sets the woman in a broader context, here a plain and simple bedroom, with a single bed. The woman, wearing only bright red ‘mule’ slippers, stands just behind the shallow metal tub, watching herself in the mirror of a dressing table, as she dries her body with a towel. To the right is the white dress which she will shortly don.

Degas’ early pastel of Woman in a Tub from about 1883 establishes some ground rules. The woman is taking, or has taken, a bath, usually in a large metal tub on the floor of a bedroom or similar, but little or no water is to be seen. She is now occupied in drying herself, or an activity which follows that bath, to prepare herself for the day ahead.

She may be alone, as here, or accompanied by a maid. The woman’s face is often obscured, sometimes by her being turned away from the viewer or, as here, as she looks down at herself. The artist shows great attention to her form, which often reflects an unusual pose, sometimes apparently quite unnaturally so.

Most of Degas’ paintings of a woman bathing were made in pastels, but there are also many sketches, a few taken through to completion in oils, and some painted in pastels over monotype prints. Most of the pastels show vertical (or steep diagonal) strokes, giving them a rough texture, even over skin.

After the Bath, Woman Drying Herself (1884-86) appears unfinished, with the upper section left with only a preliminary sketch in pastels, and a mixture of blended and unblended pastel over the rest of the body. It places emphasis on the woman’s form, and the artist has worked carefully on the profile of her right arm, breast, and right leg.

In Degas’ pastel of Woman Combing her Hair of about 1885, she is clear of the bath, and sitting on a large white towel, while she puts a comb through her long hair. That hair is held above her head by her left hand, as she combs with her right.

As an alternative, this pastel of a Woman Having Her Hair Combed from the same year shows a maid doing the same task. The woman sits upright, her head thrown back, hands on her hips, and eyes closed, as she enjoys the frisson of the combing.

Woman in a Bathtub, a pastel from about 1886, shows another motif which recurs: the woman is still standing in the shallow metal tub, bending forward (as did Degas’ dancers when attending to their shoes), apparently mopping the bath out with a sponge. This is another challenge to Degas’ draughtsmanship, in forming the arms, torso, and curve of the back across her hips.

When some of these paintings of women bathing were shown at the eighth and last Impressionist Exhibition in 1886, they caused uproar because of their perceived ugliness and squalor.

The Bath: Woman Scrubbing her Back is a pastel sketch from about 1887, showing a woman in a much deeper tub, bending forward to run a sponge or similar over her lower back, with her right hand. Great emphasis is here placed on her form.

In his slightly later Woman Sponging Her Back (c 1888-92), a near-identical figure has been transplanted to stand in front of a small bowl on a dressing table, rubbing the sponge against her right loin.

In a few of these paintings, such as the pastel Toilette After the Bath (1888-89), the woman bathing is almost cropped out of Degas’ image. Here, his attention is focussed on the maid holding a large towel behind her mistress. The maid’s expression is almost sneering.

Getting Out of the Bathtub (c 1889-90) gives a different account of a slightly earlier phase. The woman is stepping quite awkwardly from a deeper tub, and her maid bows her head as she stands with the waiting towel. Degas’ previously crisp and confident draughtsmanship is now starting to break up into more sketchy lines and vaguer forms.

In this oil painting of After the Bath from about 1895, the woman has adopted a strange and unnatural position, as if she has almost fallen from the edge of the deep bath. Her left foot is still cocked over its edge, as the rest of her lies on her right side on a towel. A maid stands behind her, attending to her long hair.

Degas didn’t just draw and paint the woman bathing, but when he was experimenting with photography in his later years, he made photos too, such as this print of After the Bath, Woman Drying Her Back from 1896.

Degas was primarily a figurative painter, and, as I have remarked, almost exclusively painted women. What perhaps started as the normal exercise undertaken by all figurative artists, of drawing and painting unclothed figures, came to dominate his later work. In them Degas explored some of the most private moments in a woman’s life – something of which he lacked perhaps any experience – and strove to perfect their form.