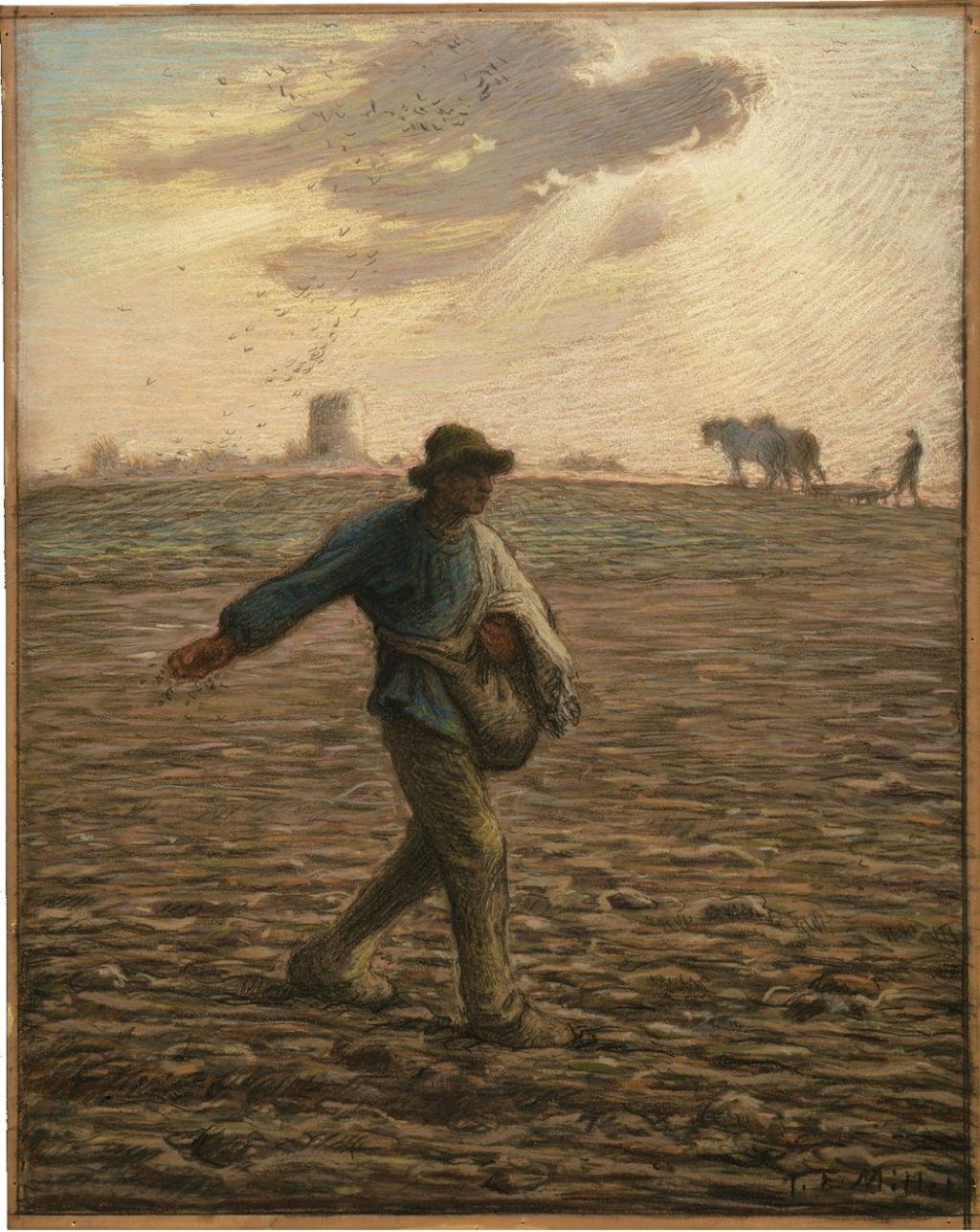 Although Millet’s The Gleaners had not been successful at the Salon, and his l’Angélus was not even submitted to public view, by 1861 his reputation was growing steadily. He had two patrons, one of whom paid him a monthly stipend in return for twenty-five paintings over a three year period, the other who regularly commissioned pastel paintings for his collection.

Millet’s Man with a Hoe (c 1860-62) is a full length portrait of an agricultural labourer, who is leaning on his mattock after breaking up the heavy and stony soil, presumably to ready it for a crop such as potatoes. He has clearly been swinging the short haft of the mattock for much of the day, its weight suspended from his bent back. You can almost feel his back pain as he tries to find some comfort in this momentary break.

In the distance there are bonfires burning on the plain, their smoke rising languidly into the sky.

His Young Girl Watching her Sheep (c 1860-62) revisits the motif of a young woman tending a flock of sheep at the edge of woodland, while busy with her knitting. As she is having to concentrate on that craft work, the flock is under the watchful eye of her black dog.

Shepherd Tending His Flock (c 1862) is its male counterpart, most probably painted during showery weather, with its marvellous luminous sky. This older shepherd is fortunate enough to be wearing an old sou’wester-style hat and weatherproof cloak. These sheep look quite thin and scrawny, and are feeding on the stubble left after harvest, implying the painting was set in the early autumn.

Although he had painted nudes earlier in his career, The Goose Girl (c 1863) is a rather uncomfortable setting of a nude in a backdrop of social realism. This young woman, who is supposed to be tending the large flock of geese further along the river, has stripped off her working clothes and stepped out of her coarse wooden clogs to bathe herself in the river. She still wears a kerchief over her hair as an obvious mark of her peasant status.

Millet had been developing this composition in a series of studies over the previous seven years, and although the result is certainly original, I think that it makes the viewer feel a voyeur, something that classical nudes in a rustic setting generally avoid, and not, I think, the artist’s intention. The cattle seen at the top right also seem out of place. However, its use of light and painterly style provided inspiration for later Impressionists and Neo-Impressionists.

In the mid-1860s, Millet developed some seasonal themes which softened his social message. Ceres (The Summer) (c 1864-65) is a classical mythological portrait of the goddess of agriculture, grain crops (from her name we get the modern cereal), fertility, and maternal relationships.

Ceres stands, her breasts swollen and ready for lactation, her hair adorned with ripe ears of wheat, a sickle in her right hand to cut the harvest, and a traditional winnow (used to separate the grain from chaff) in her left hand. At her feet is a basketful of bread, with ground flour and cut sheaves of wheat behind. The background shows the wheat harvest in full swing, right back to a group of grain- or hay-stacks and an attendant wagon in the distance.

Spring (Daphnis and Chloë) (1865) may come from the same series of seasons, and is also based on a classical story. Daphnis and Chloë were raised separately but became devoted childhood friends. They fell in love naïvely, and after a series of adventures were finally married. Daphnis holds a bird’s nest full of chicks for Chloë to feed. They are surrounded by spring flowers, and behind them a large herm statue has been decorated for a spring festival.

Millet also revisited his successful painting of a sower from fifteen years earlier, here with two pastel paintings with the same title, The Sower, from around 1865. That above is now in the Walters, and that below in the Clark. These feature a different background, which includes the tower of Chailly, harrowing using a pair of horses, and a swirling flock of crows in the sky.

Midday Rest (1866) is another delightfully rustic pastel, showing field workers enjoying a short siesta during the harvest. Although Millet had not dodged any of the realities in these scenes, he was now starting to take the edge off his social message, with brighter paintings which are less about labour and work, and more upbeat in tone.

Many of his works – including The Gleaners, l’Angélus, and Potato Planters – were shown at the Exposition Universelle in Paris in 1867.

My final selection from Millet’s paintings of this period is, I think, one of his finest, and least characteristic of his work: Dandelions (1867-68). His pastels capture the delicate dandelion ‘clocks’, their hairy stalks, and the fragile beauty of the flowers of the roadside. Perhaps he meant us to draw a parallel with the rural poor, and the transience of their lives.

In 1868, he received his most valuable commission to date, of 25,000 francs, for a series of paintings of the four seasons.