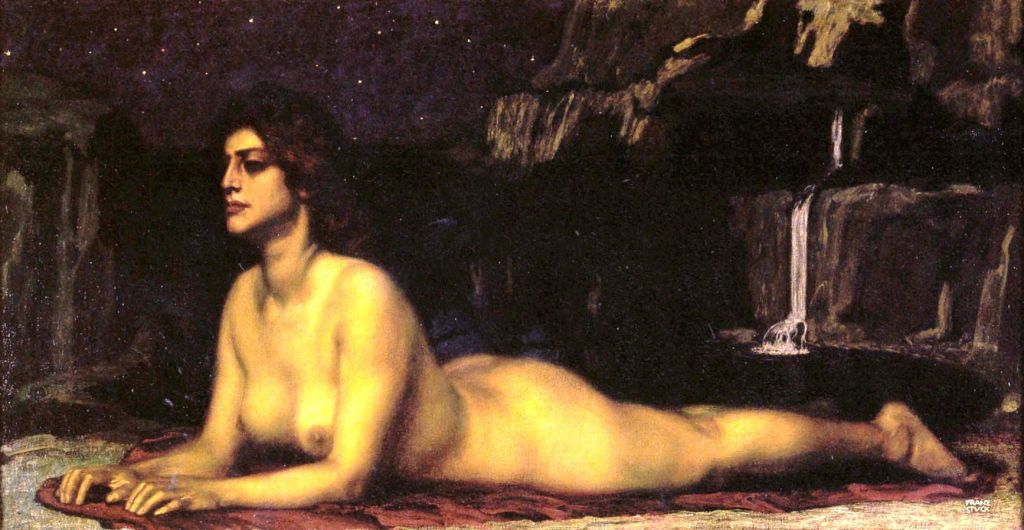 By 1900, Franz von Stuck had built upon his already substantial reputation, and remained active in the Munich Secession.

Wounded Amazon (1903) is a development of an earlier painting from 1897 in which von Stuck first explored the theme of Amazons, and unfortunately much later became a favourite of Hermann Göring. Here they are at war with Centaurs, and the young Amazon who almost fills the canvas has been wounded under her right breast. At the right is the corpse of another, pale blue in death.

Von Stuck also revisited the Greek Sphinx (1904), perhaps in response to Fernand Khnopff‘s painting of 1896. This version is completely human, but still in the pose of the half-woman, half-lion seen more commonly. It is night, and the sphinx lies in the heraldic couchant position characteristic of the beast. Significantly, there is no sign of its previous victims.

Susanna Bathing (1904) has been an enduringly popular motif for many centuries, and her story was painted by Lovis Corinth and other contemporary painters in Europe. Von Stuck shows the most frequently-painted scene, in which two voyeuristic elders watch the beautiful Susanna bathing in her garden, then try to blackmail her into committing adultery with them.

Von Stuck also progressed his recurrent theme of fauns and nymphs in his very loosely-painted The Game (Faun and Nymph) (c 1904). A pale-skinned nymph is escaping the clutches of a darker-coloured faun; she pushes his head away from her, as she breaks free, presumably to don the clothing which she is carrying.

The marked contrast in skin tones has a very long history, dating back at least to the ancient Egyptians, who used the same gender-based colour-coding.

Orestes and the Erinyes (1905) shows the haunted figure of Orestes trying to escape from three snake-wielding Furies, who swirl around him with menace. They are avenging Orestes’ murder of his own mother, Clytemnestra, and her lover Aegisthus, a story told in a trilogy of plays by Aeschylus, the Oresteia.

This story became particularly popular around the end of the nineteenth century, when it was painted by Gustave Moreau and John Singer Sargent. I consider their paintings here. Von Stuck’s painting is particularly innovative in its use of space, within which the Furies swirl and tumble.

Von Stuck’s Salome (1906) follows those of Gustave Moreau, which appear to have changed the original post-Biblical story with The Apparition (c 1876), and Lovis Corinth, whose paintings of 1899 and 1900 were very influential in the story’s further evolution. Von Stuck was one of the first painters to ride on the wave of ‘Salomania’ which swept Europe from about 1905.

Richard Strauss saw Oscar Wilde’s play performed in Berlin in 1902, and his opera premiered in Dresden, at the end of 1905. The following year, and perhaps as an even more immediate inspiration for this painting, the dancer and choreographer Maud Allan produced the show Vision of Salomé in Vienna, which featured a notorious version of the Dance of the Seven Veils.

In 1906, von Stuck was awarded the Order of Merit of the Bavarian Crown. Among his students and visitors to his classes were members of the Blue Rider group, including Paul Klee and Wassily Kandinsky, and he later taught Josef Albers.