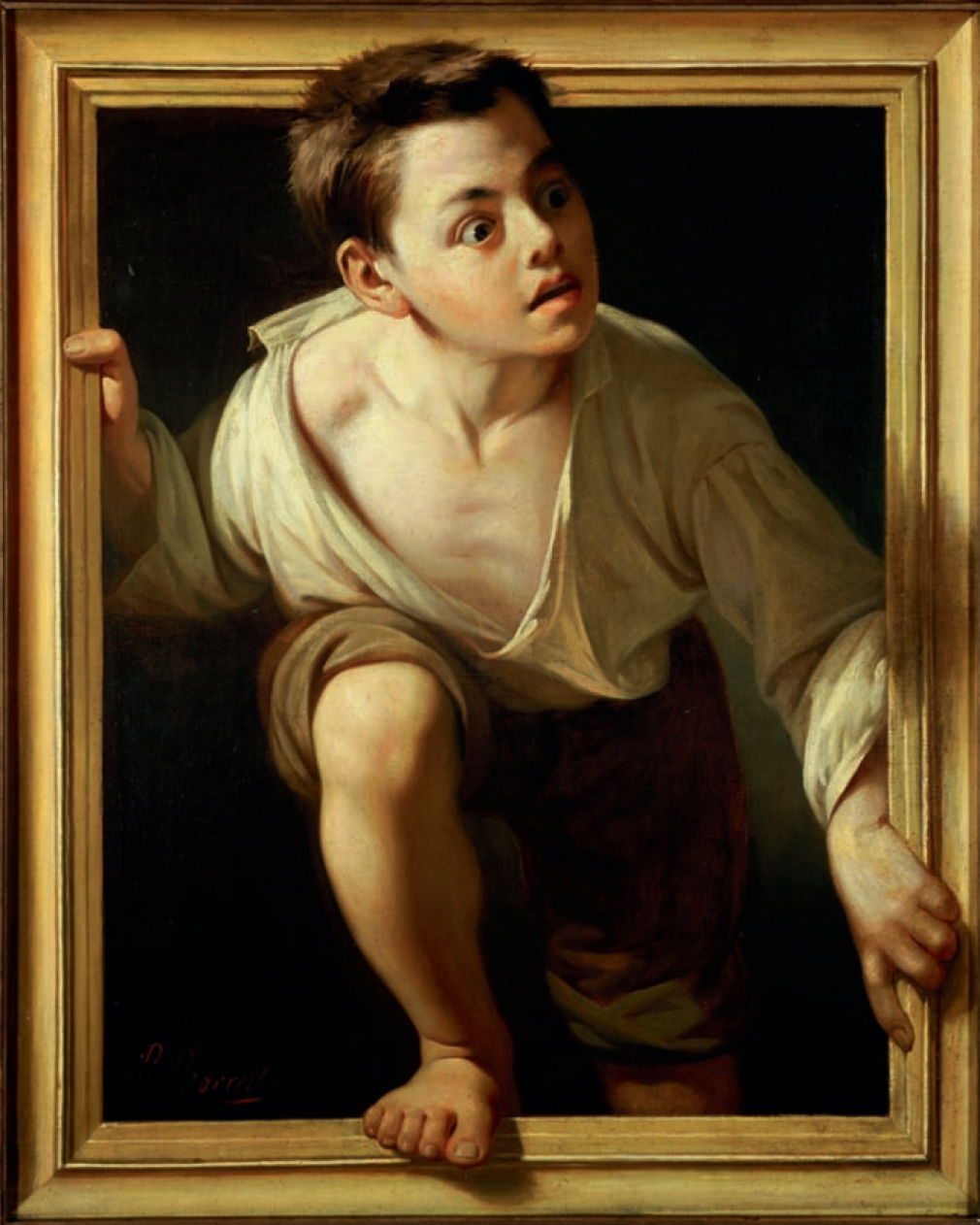 Today, the First of April, is traditionally a day of practical jokes and pranks: what more appropriate day to consider how painters, working on flat surfaces, can deceive the eye? In the trompe l’oeil, the artist goes far beyond the normal trickery of painting, to make the viewer think that they are looking at something quite different, and usually intensely three-dimensional.

The Romans loved wall-paintings which made their rooms look as if they were in a spacious outdoors. Unfortunately their multiple perspective projections make their architectural trompes l’oeil look ungainly today, but murals which set a room in the midst of a garden, like these from the House of the Golden Bracelet in Pompeii, are still exquisitely real.

With the invention of accurate 3D perspective projection, the strict optical realism necessary for successful deception was at last achievable. Indeed, one of the first paintings to employ modern perspective, Masaccio’s magnificent The Holy Trinity (1426-8) in the Basilica of Santa Maria Novella in Florence, is also one of the greatest trompes l’oeil.

The Renaissance then brought a succession of masterly religious paintings which aimed to be so realistic that they deceived the eye, including Petrus Christus’ The Nativity (c 1445-50).

Bellini painted several works which used perspective projection for a trompe l’oeil effect: this is his San Giobbe Altarpiece from about 1487.

And this is Bellini’s next work, from 1488, the Frari Triptych.

Many frescoes couple powerful projection with enormous size to extend the building that they are in, and this is almost universal for painted ceilings. Andrea Mantegna’s oculus on the ceiling of the Spouse’s Chamber in the Palazzo Ducale, Mantua, is a splendid example from 1473.

Andrea Pozzo made the fresco trompe l’oeil his speciality, creating extraordinary ceilings such as his Allegory of the Jesuits’ Missionary Work (1691-94) in Sant’Ignazio, Rome.

Easel paintings are amenable to deceptive devices at a smaller scale. Vermeer’s Girl reading a Letter at an Open Window (c 1658) interposes a railed curtain to give an air of intimacy, suggesting that the viewer is peeping past the curtain and gazing in at real and private life.

This was exploited by the American artist Raphaelle Peale in his Venus Rising From the Sea – A Deception (c 1822). This was a visual criticism of the smallminded attitude to the display of paintings of nudes at the time. Peale’s extra twist is that, rather than using a curtain, his nude is concealed by a handkerchief.

From early in the Renaissance, painters realised that they could mimic three-dimensional artworks too. Jan van Eyck’s The Annunciation Diptych (c 1433-35) probably started from the concept of a monochrome grisaille, and ended up as vividly 3D as any sculpture.

If a painter could feign a sculpture, other small wall-mounted objects were within reach. Carel Fabritius put The Goldfinch (1654) on someone’s wall; with a light frame on an off-white wall, it must have looked very realistic.

At about this time, painters such as Cornelis Norbertus Gysbrechts made their speciality the production of trompe l’oeil still lifes. A popular theme was the wall-mounted letter-rack, shown in his Board Partition with Letter Rack and Music Book (1668).

Some of Gysbrechts’ trompes l’oeil became quite elaborate too, such as his A Cabinet in the Artist’s Studio (1670-71), which also uses a hanging curtain device.

Two centuries later, William Harnett and some other American painters made very similar works; this is his Mr. Hulings’ Rack Picture (1888).

Harnett’s The Last Summer Rose (1886) is more of a conventional still life, but also aims to deceive.

The other line which has been pursued in easel paintings is the use of false frames to accomplish visual tricks. There are countless paintings which have included false frames of various types, sometimes with their figures ‘breaking’ the false frame by sitting or leaning on it.

Gustave Moreau’s Nyx (1880) is an example of many paintings which come with an inbuilt and painted frame. It is unusual for Moreau, and something of a puzzle in that this type of realism was never a big feature of his art.

One of the most brilliant of these, Pere Borrell del Caso’s Escaping Criticism (1874), shows its single figure climbing through the false frame as if it were a hatch, allowing them to move from the flat constraints of the canvas back out into the 3D world of the viewer. It is an excellent demonstration of how sophisticated illusion can be generated by a skilled painter.