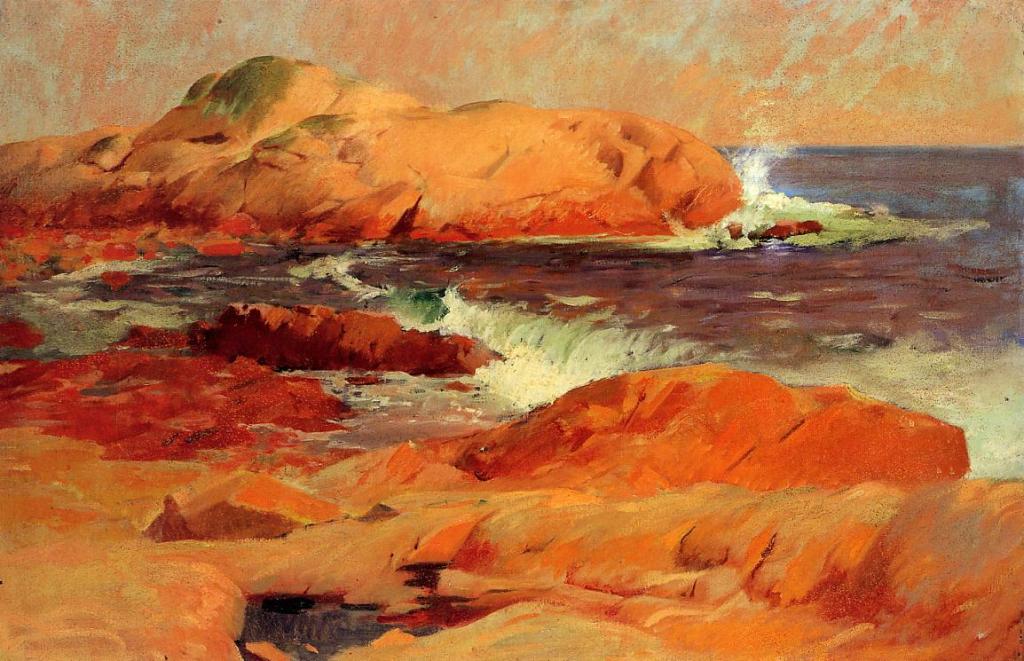 One name crops up time after time in the biographies of American painters who were active in the late 1800s, someone who seems always to have been there, in company with, but never to stand on his own: Frank Duveneck (1848–1919). It turns out that, at the time, he was as celebrated as his friends, such as William Merritt Chase, but now seems to have lapsed into the unknown.

Frank Duveneck was born in Covington, Kentucky, to a German immigrant family, and was taught to paint by a local artist. In 1869, he travelled to Munich, Germany, where he studied at the Royal Academy under Wilhelm von Diez and Wilhelm Leibl.

His paintings were acclaimed when shown at the Boston Art Club in 1875, and he found himself becoming a popular teacher.

In 1876, Duveneck and Chase both painted a young boy, carefully posed with a parrot, in Chase’s Munich studio. Duveneck’s The Turkish Page is technically brilliant, and an exceedingly ambitious work for someone within seven years of starting their training. It was exhibited at the National Academy of Design in New York the following year, but had a mixed response. Viewers found its still life approach lost narrative, and were puzzled by the depiction of the child.

By the time that it was displayed at the Pennsylvania Academy in its 1893-4 exhibition, changing taste brought it acclaim, and it sold.

Chase’s version, below, was surprisingly different in many respects. I leave it to you to decide which you prefer. Either way, I think that it establishes Duveneck on a par with Chase in terms of art.

The Cobbler’s Apprentice (1877) was also painted in Munich, where it sold to the American Vice Consul. It eventually found its way into the collection of Charles Phelps Taft.

During the late 1870s and 1880s, Duveneck spent long periods in Germany and Italy. In 1878 he set up his school in the village of Polling, in Bavaria, where he taught mainly Americans, who became known as the ‘Duveneck Boys’. These included John Henry Twachtman, Julius Rolshoven, and John White Alexander. Among the many wonderful landscapes which he painted there is his Polling Landscape (1881), which is one of my favourites.

His Grand Canal in Venice (c 1883) was a study for his Water Carriers below, from his visits to Venice.

Duveneck was also a successful print-maker, as exemplified in his The Bridge of Sighs (1883).

Water Carriers, Venice (1884) is probably Duveneck’s finest painting of Venice, combining the view from his earlier study, with an intimate insight into the daily work of ordinary Venetians.

Some of his sketches from Venice are very progressive in their appearance, as with the vigorous brushwork of his Red Sail in the Harbor at Venice (c 1884).

Duveneck painted some masterly works showing country people in their working lives: his Girl with Rake (c 1884) mixes precision in the foreground with varying degrees of looseness behind.

Despite being dated two years later, the young woman in his Siesta (1886) looks and dresses suspiciously similarly to that in Girl with Rake, down to her sickle, cast aside from her sleeping body.

Duveneck had already met and taught the American Elizabeth Boott in Paris, when he made his way to Florence. Boott had been born in Boston but raised in the Villa Castellani (c 1887) there. This villa overlooks the square of Bellosguardo, which in turn overlooks Florence, and has achieved literary fame in two of Henry James’ novels, Portrait of a Lady in which it is Gilbert Osmond’s residence, and The Golden Bowl in which Adam and Maggie Verver were modelled on Elizabeth Boott and her father Francis, a classical composer. Duveneck married Elizabeth Boott in 1886, but she tragically died just two years later from pneumonia.

Duveneck returned to the US to live in Covington and teach at the Art Academy of Cincinnati until his death. Among his pupils there was Edward Charles Volkert, the cattle painter.

Among his portraits of this period is that of Maggie Wilson (1898).

He also painted some overtly Impressionist works, such as the brilliantly-lit That Summer Afternoon in My Garden (c 1900).

He spent his summers in and around Gloucester, Massachusetts, where he painted his Horizon at Gloucester (c 1905), which shows the port’s distinctive skyline from Eastern Point. In 1906, he was elected to the National Academy of Design as a full Academician.

The Yellow Pier Shed (c 1910) is another of his summer paintings of Gloucester’s harbour.

Curiously, in his final years he painted several views of Brace’s Rock (c 1916), off Eastern Point, Gloucester. Fitz Henry Lane (1804-1865) had done the same shortly before his death.