I have spent a worryingly long part of the last thirty-odd years working with benchmarks of different kinds, and know only too well how misleading they can be. I wanted some reasonably reliable data to indicate any significant differences in performance between the Thunderbolt and USB 3 cases – primarily to see whether the cost of the Thunderbolt case would be justified.

All tests were run on the same iMac (iMac17,1, El Capitan 10.11.6, internal Fusion Drive, no heavy background activity such as Time Machine backups), with the same SSD in the two different cases. Results did vary, particularly with the USB 3 case, but I hope to give you a good feel for how the two systems will perform in real-world usage.

I measured this using the Speed feature in Drive Genius 4.2.1, which claims to give a “raw sequential read speed” “using optimal patterns”. In the Thunderbolt enclosure, the result was 384 MB/s, and the USB 3 enclosure achieved 424 MB/s. For comparison, my Transcend 2 TB Thunderbolt hard drive achieves around 23 MB/s, so both Thunderbolt and USB 3 SSD systems are far faster. However the best result that I have for this test comes from my Promise Pegasus Thunderbolt RAID drive, which achieves an amazing 716 MB/s. This demonstrates the potential performance of Thunderbolt with a fast disk array.

For this, I turned to Blackmagic Disk Speed Test (App Store, free), which is primarily aimed at helping those streaming high-bandwidth video. This gives separate read and write measurements, and cycles through variants of the test. 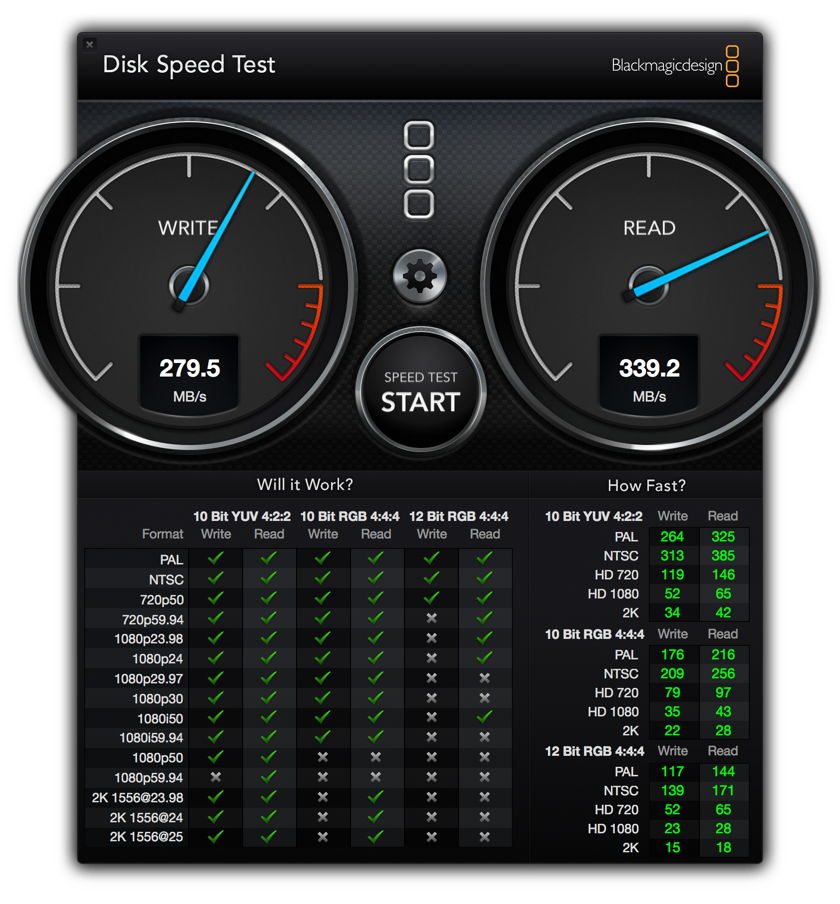 The USB 3 enclosure varied more widely, in some tests achieving write results over 400 MB/s, but most typically returned 280 MB/s writing, and 339 MB/s reading.

For comparison, my Transcend 2 TB Thunderbolt hard drive can only muster 74 MB/s writing, and 62 MB/s reading. The Promise Pegasus Thunderbolt RAID does rather less well, at 377 MB/s writing and 273 MB/s reading, although those are still pretty impressive for old-fashioned hard disks.

With so little to choose between the Thunderbolt and USB 3 cases in terms of performance, I did one Finder file copy, of a 5.23 GB movie onto the SSD from my Fusion Drive. The time required by each case, from dropping the movie onto the external drive until completion, was just 34 seconds – a net transfer rate of just over 150 MB/s, although some of that time was of course lost to Finder working out what it had to do. In practice, I would expect sustained copy speeds of over 200 MB/s, or around 12 GB every minute.

Thunderbolt is capable of out-performing USB 3 significantly, but in this example there is little difference between the cases in terms of performance. You get what you pay for in terms of case quality and construction, though. If only Apple would provide support for S.M.A.R.T. over USB 3, Thunderbolt would not really be a serious option here, in view of its colossal premium in cost – which is perhaps why Apple has been so intransigent.

If you want even better performance, it is going to cost, as you will need to look at an SSD hardware RAID connected by Thunderbolt 3, perhaps, and even then you are likely to hit Mac limits before reaching the theoretical optimum.

Your Mac(s) will also be a significant factor in choice. If you need to use your external drive with the few models which have Thunderbolt but not USB 3 ports, and do not have a Thunderbolt dock (or hub) with USB 3 support, you may be driven to the more expensive case.

I will keep an eye open for further SSD bargains, so that I can have a choice of my two cases. But for the moment, the SSD stays in the USB 3 case.