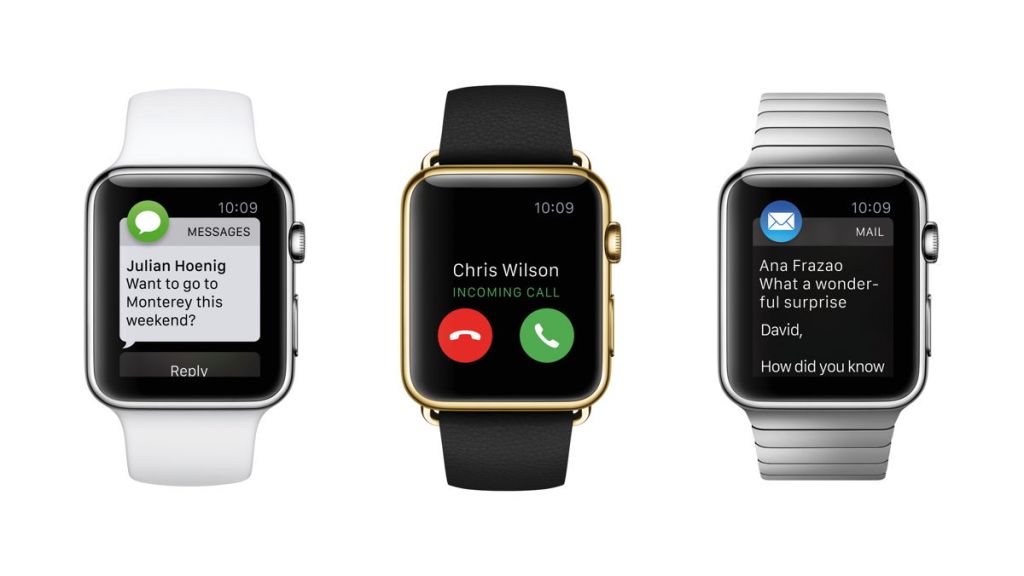 Apple Watch Sport, Watch Edition, and Watch: which did you choose? Photo courtesy of and © Apple.

My  watch is over a year old now. Although some of its watchOS software updates have been a bit nail-biting, it has generally worked flawlessly, until yesterday morning.

What happened then is something which a few other watch users that I know have encountered: its face went black, it refused to wake up, and played dead. As usual, this happened at the most awkward moment, just as we were about to leave the house, already late for our morning walk.

The watch has three controls on it which you can use to deal with this: tapping on its face, the side button (that’s the long one), and the Digital Crown (the more prominent round button on its side). You will already have tried tapping on its face, possibly to the point where your fingertips are starting to tingle.

One possibility is that it has gone into Power Reserve mode, because its battery is dangerously low. You can check that quickly by holding the side button (the long one) in for at least a second. If it is very low on battery life, that should elicit a small time display; if there is a red lightning icon by the side of that time display, the battery is almost completely flat. You know then that you have to put it back onto its charger as soon as possible.

My watch was freshly and fully recharged. Apple’s advice is then to restart the watch, by pressing and holding the side button (long one) until you see the Power Off slider. If this does appear, drag it to the right, to turn the watch off. Then press and hold that side button again until you see the Apple logo appear on the display.

If this does nothing, or does not work as planned, the next step to try is to force your watch to restart. Take it off and hold it in your left hand (or otherwise) so that you can perform this manoeuvre. This requires ‘bracing’ that holding hand against the force you are going to apply to the buttons on the watch for around ten seconds, so your hold needs to be firm and sustainable. Then press the side button and the Digital Crown together, and hold them pressed for around ten seconds, until you see the Apple logo appear. Your watch will then restart.

A forced restart then takes time – a couple of minutes – until your watch is back up and running.

You might see the Apple logo appear briefly after a restart, then disappear, following which your watch emits a verbal description of what is on its display. That suggests that you have (somehow) put it into Screen Curtain and VoiceOver mode. You can correct that in the Watch app on your iPhone: tap General > Accessibility > VoiceOver, and switch them off there.

Once your watch is back up and running, you can breathe a big sigh of relief, but you may need to do more before it is working properly again. In my case, its Bluetooth connection had packed up, as shown by the red iPhone icon at the top of the display (the same as when the watch is out of range of your paired iPhone), and by the Bluetooth icon at the top of my iPhone’s display flashing slowly.

Just as with the watch itself, the best remedies for that are the traditional ‘turn it off and back on again’. First, turn your watch’s Bluetooth off and on by putting it into Airplane mode. Swipe up the face to see Glances, and swipe left or right until you see the airplane icon. Tap it to turn the mode on, wait a few seconds, then turn it off again.

If that doesn’t restore your Bluetooth connection, repeat this procedure on the paired iPhone. Open Settings > Bluetooth, and turn it off. Wait a few seconds, then turn it back on again. That did the trick for my watch, and it has been ticking away happily ever since.

What you want to avoid doing is trying to unpair your watch, using the Watch app on your iPhone. That will unravel all sorts of things, and you will then waste a lot of time trying to set them all up again.

If you try to bring your watch back to life and nothing seems to work, then I am afraid that you will need to call Apple support. It may well need to go off for repair. Sorry.