In the 32 years that the Mac has been the computer for the rest of us, one frustratingly unfriendly feature has remained: error numbers. Everything else has been rendered more accessible, more friendly, more Mac, but when anything goes wrong, our Macs still spit out coded messages about error number -32162. In the day when we can have a conversation with Siri, this is an archaic relic.

Once armed with one of these numbers, it is hard to know what to do with them. Search and you find all sorts of weird discussions over their meaning, or are referred to ancient translation tables which only baffle.

There is now a comprehensive and up-to-date search facility, at OSStatus.com. Just enter the magic error number and it will search the source code files of OS X, iOS, tvOS, and watchOS and report what it might mean. 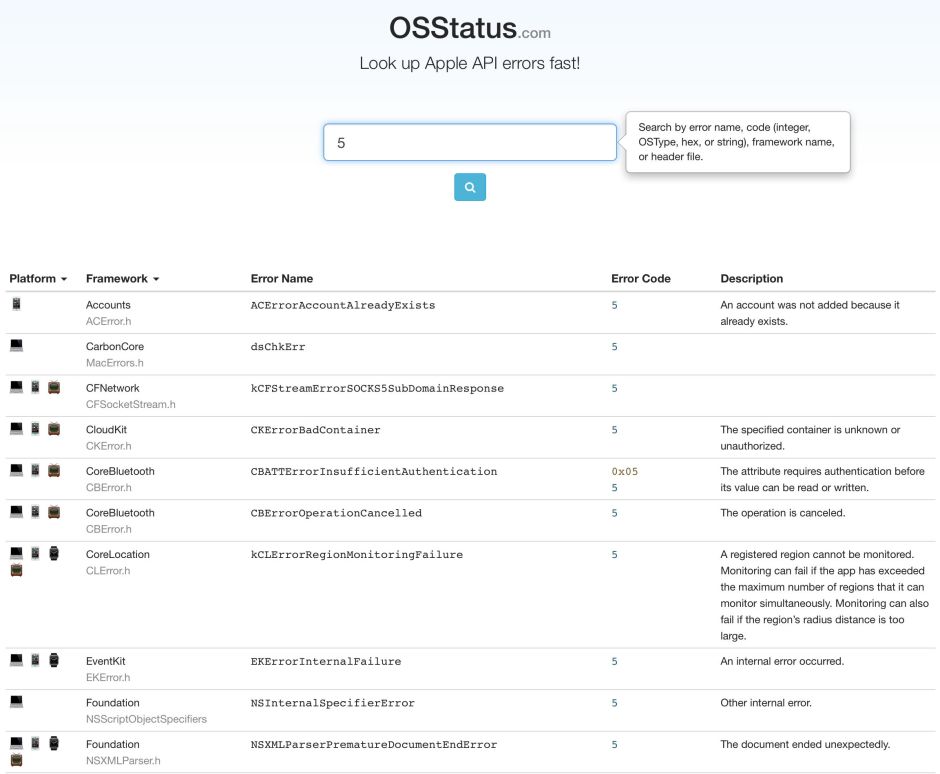 For example, on OS X alone, error 5 can mean any of 26 different things, according to which component has issued that number. These meanings are not subtle nuances around some central theme, but in this case span all sorts of issues from the document ended unexpectedly (Foundation), to the product is not available in the current storefront (StoreKit).

Even within a component of one of the operating systems, any given number can mean several quite different things: error 5 from the kernel of OS X can mean any of

If this seems anarchic, OSStatus lets you reverse the search; by entering a fragment of text, you can see signs of underlying structure within the overall mess. Typing ‘kern’, for example, reveals the number series

Viewed through its error messages, OS X is seen as an overgrown forest, a mixture of old and younger trees with young saplings emerging from its dense undergrowth. Any pretence of a coherent and ordered system of unique error codes has long since gone.

Some day, Apple’s engineers might finally rationalise their code, and come up with a better method of dealing with errors. Until then, OSStatus is a free service developed by Seth Willits, principal at the Araelium Group, vendors of apps including Screenflick, Querious, Rewind, and DMG Canvas. It’s the very best form of advertising, for which we should all be very grateful.

My thanks to Patrick Wardle for drawing attention to this.