Armed with my brand new iPad Pro 9.7″ – that’s the regular-sized iPad Pro, not the larger one – and its Apple Smart Keyboard, I have now spent some time entering records into my FileMaker Go database.

FileMaker Go 15 is not only a delight to use, but is free from the iTunes App Store. The cleanest way to install it and your database file is through an iTunes Sync. Before starting this, open the App Store in iTunes and obtain the FileMaker Go 15 app, then run your normal sync in iTunes. Once that is complete, if FileMaker Go 15 has not been automatically installed (according to your preferences), install it. You can then drag and drop your FileMaker Pro database from your Mac into the document listing for FileMaker Go 15, to copy it across.

There are other ways of moving a copy of your database over to your iPad, of which the neatest is using iCloud, and you can share the database from your Mac. If you are really serious, you can share it from FileMaker Pro Server, but for a single user that is overkill! The FileMaker Pro and Go manuals explain all the various options, but I like to keep things simple and robust by working on a separate copy of the database.

Before trying this, I was uncommitted over the value of Apple’s Smart Keyboard. I have used a range of keyboards with iPads and similar systems in the past, and found their minor annoyances and inconveniences sufficient to deter me from using them for long. The Smart Keyboard turns out to be very easy to use when sat at a desk, and because it does not have a wireless connection it does not radically shorten battery endurance.

Open that enlarged version of the database and check that it looks good, with its additional records ready to copy across into your main database. At this stage you can delete any records which you know are already in your main database, leaving just those to be added. Then close that database, and open the master database which has remained on your Mac.

In the File menu, select the File… submenu of the Import Records command to import records from the database which you brought over from your iPad.

You will be prompted to locate the file; once you have done that, click the Open button to be taken through the succession of dialogs.

In the Import Field Mapping dialog, FileMaker Pro should have recognised that the two databases have identical structure, and offer a direct mapping. If not, map the source to target fields carefully. The Import Action should normally be set to Add New Records unless you have been updating existing ones. Then click the Import button.

The next dialog may seem more opaque. Check the box if you want any fields with auto-enter options to be updated during the import process. Then click on the Import button.

Once the import is complete, this dialog will inform you how many records were actually imported. FileMaker Pro will then show those imported records alone: click on Show All to view the whole database again, and to prepare to export the records for Storyspace/Tinderbox. Check through it again, then export the database using your script system, CSV file, or any other technique which you want to use. You now have your text file ready to import into Storyspace/Tinderbox.

If you are going to perform several or many incremental updates like this, it is worth thinking about making that as easy as possible. One potentially valuable tool is a field containing a serial number. This can be used to make it easier to select records to be added to the master database. 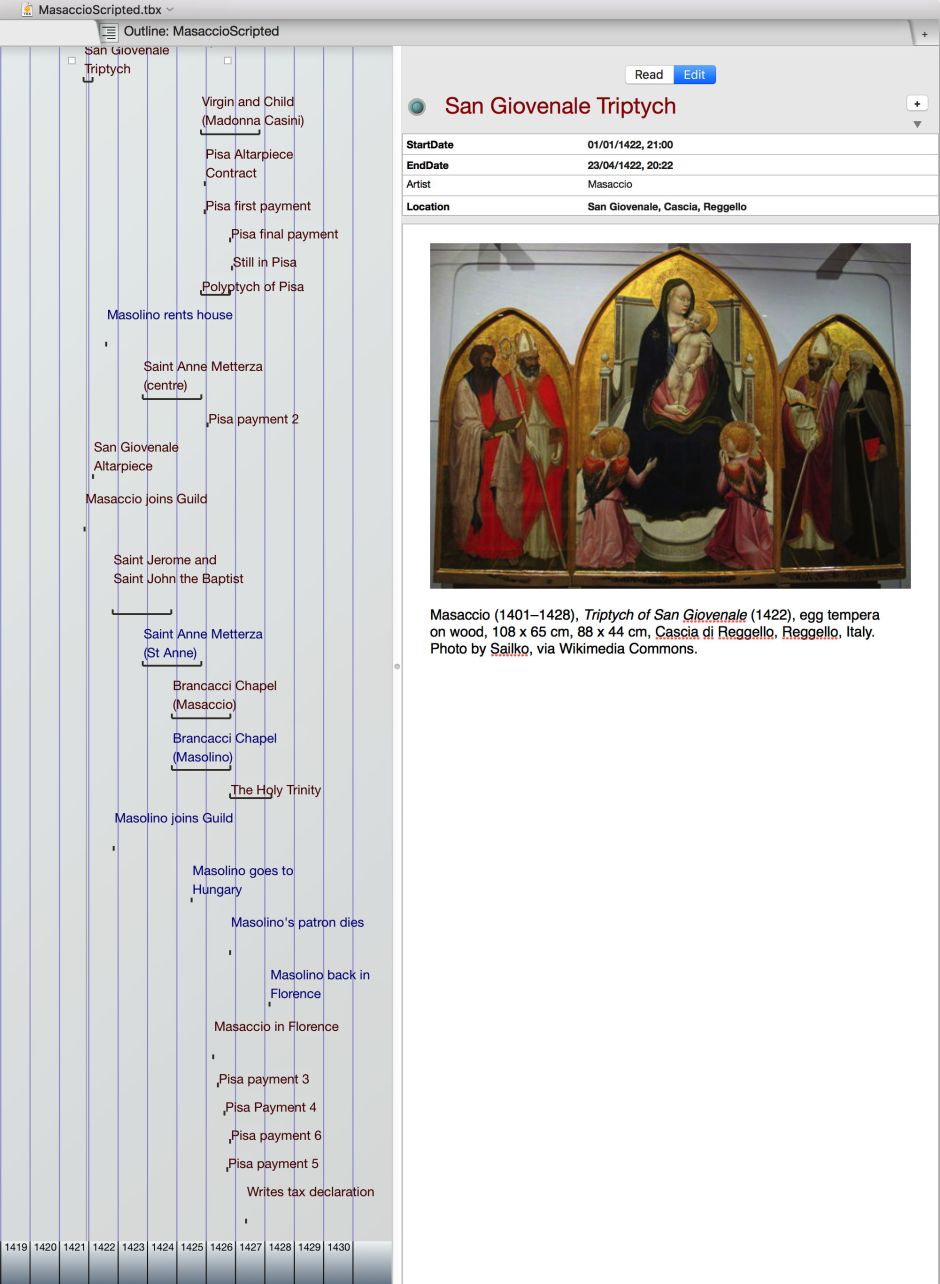 I tested this with real records, using both my scripted system detailed here, and the CSV approach detailed here. My scripted system worked fine, just as I had hoped; the CSV version also worked well but seemed unable to set the imported writing spaces or notes to the intended prototype events. This appears to be a limitation of CSV import, and makes me even happier that I opted for a script system instead.

Although using FileMaker Go and Pro is not as direct as being able to run fully-functional copies of Storyspace or Tinderbox on an iPad, it is little different when you need to enter large numbers of identically-structured writing spaces or notes, and takes little longer to accomplish, once you have set your script or import system up. I will continue to add records to my database, and keep moving them across.