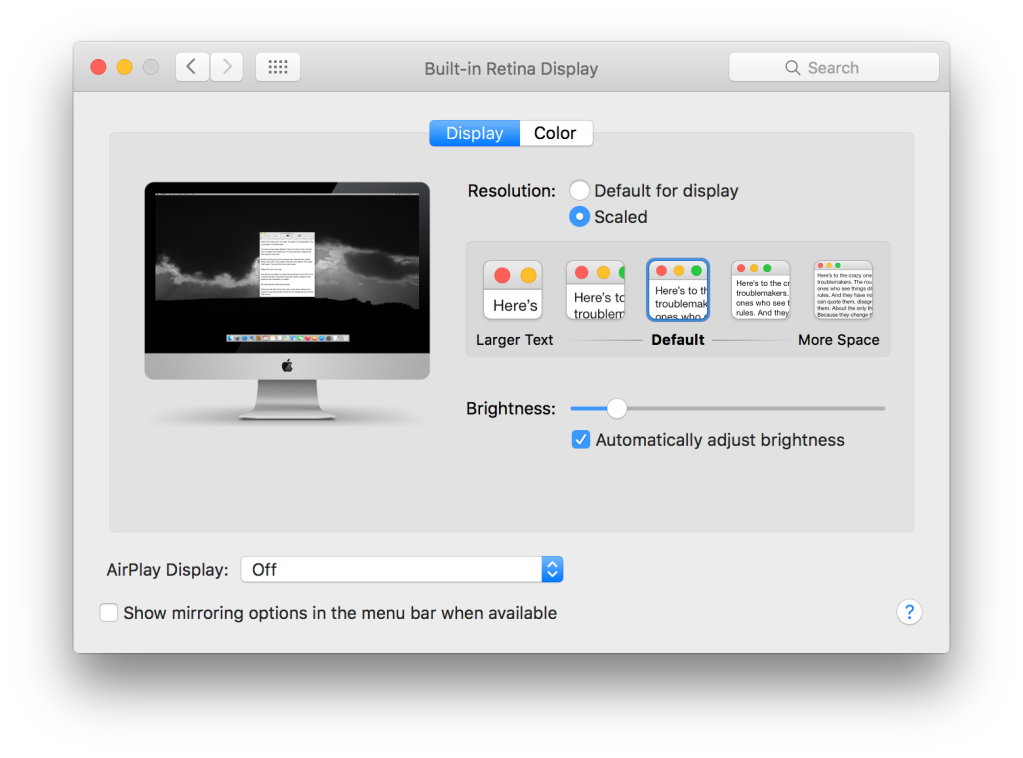 Apple has offered its 27″ iMacs with Retina 5K displays for over a year now, and most recently has added a Retina 4K display as an option for the 21.5″ model. First seen in the Late 2014 27″, this is actually the third model of iMac 27″ supplied with it.

It has been driven by several different graphics cards, each from AMD’s Radeon R9 series, from the M290X in the lower end earlier models, to the current top-of-the-range M395X. Most have 2 GB of memory, although the X models have 4 GB. My iMac has the M395, which should be ideal for good performance with a single display, but would start to struggle when trying to drive large high-resolution external displays as well.

Apple has been firmly pushing developers towards resolution-independence over many years, to cater properly for these high density displays. This has (largely) worked on iOS devices, but is still a bit confused in OS X. In standard use, the 27″ Retina 5K display pretends to have a resolution of 2560 x 1440, but still operates at 5120 x 2880. This produces text and windows which are comfortably read at a standard distance, but with sufficiently fine detail that you do not ordinarily notice individual pixels.

Consequently, there are two different ways in which apps can treat this huge display: they can scale to 100% at the actual full resolution of 5120 x 2880, making a 1K square image really quite small, or they can scale to allow for the finer pixels, pretending that the display is operating at 2560 x 1440, making that 1K square image fairly large relative to the total display area. 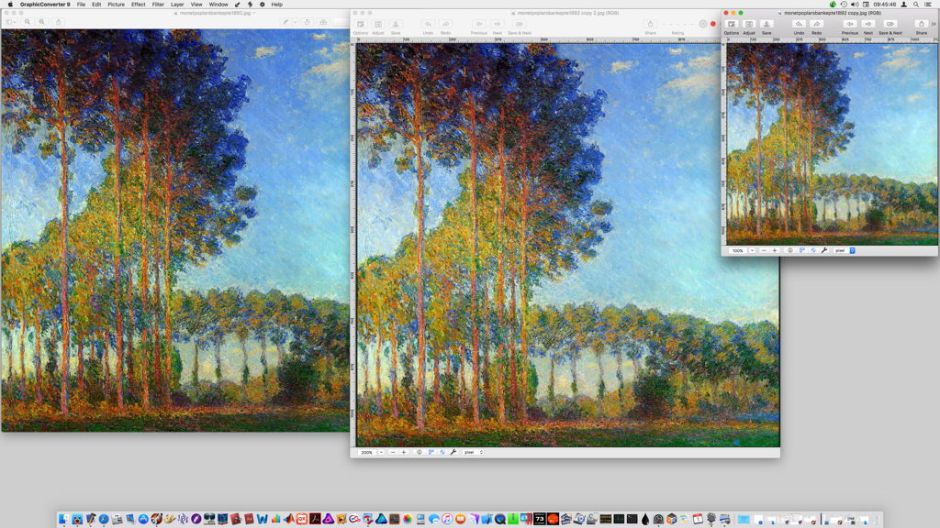 The great majority of apps opt for the latter, unless you switch the display to operate at its full resolution of 5120 x 2880, but some, such as GraphicConverter, do not. The screenshot above shows three identical copies of the same image, originally slightly larger than 1K pixels square: at the left, as shown ‘Full size’ by Preview, at the right as shown at ‘100%’ by GraphicConverter, and in the centre the completely smooth version provided by GraphicConverter at 200%.

There is no right or wrong here, and you just have to get used to the way in which different apps handle the issue. When I prepare images for posting on this blog, I use GraphicConverter to scale them and create the final JPEG file. I have to remember that I will then see the image at half (linear) size compared to the way in which it will appear in your browser. This is no big deal once you understand what is going on.

The Displays pane has changed to support these Retina models. In its normal mode, it is set to the default for the display, which is the combination of 5120 x 2880 and 2560 x 1440 described above. Select the Scaled option, and you can push it to look like 3200 x 1800, with minute windows and text, or drop it back to look like 1600 x 900, which is very helpful for those who need larger text and objects on the display.

However, you can only see and select from the full range of resolutions if you hold the Option key when selecting the Scaled option. You can then additionally check the Show low resolution modes box to choose from the complete range, which goes from 5120 x 2880 down to 1280 x 720 (low resolution).

The only other (continuing) quirk is with playing DRM-protected high-definition media. Movies such as FilmBuff’s Jerusalem, which was made for HD, are stunning in their detail to the point where they almost appear real (it is a wonderful movie too, on any display). But take a screenshot using Command-Shift-3, for example, and all you get is a 5120 x 2880 grey rectangle. This is a sad throwback to the early days of playing back DVDs, when Apple’s DVD Player did exactly the same thing. Hopefully everyone will get over this pettyfogging in time and allow screenshots again.

Having worked at a conventional iMac 27″ display, with a resolution of 2560 x 1600, for over four years, I was always delighted with it. Switching to the Retina 5K 27″ display has been a huge improvement, and not just when watching HD movies. This display is almost perfect at its default setting, and very versatile beyond that. I would not wish to return to anything else, thank you.