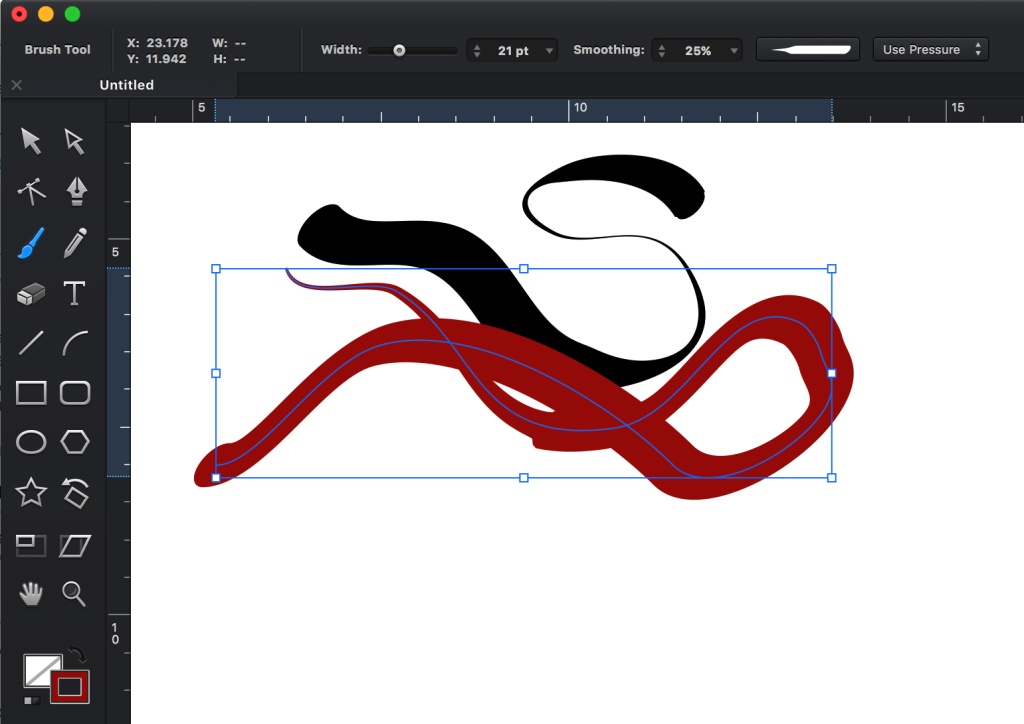 Starting to use a Magic Trackpad 2 can be a bewildering experience, because of the inadequacy of instructional aids. Video, audio, and the English language struggle to describe touch sensation or control. This is not helped by Apple’s free use of overlapping terms, including Force Touch, Force Click, and haptic feedback. So the most important thing to do is try the trackpad out yourself.

Open a new document in a text editor or word processor, and type in some normal words. Using the Magic Trackpad 2, position the cursor in one of those words, and gradually – over a period of a few seconds – increase the pressure exerted by a single finger in the middle of the trackpad.

Using a Magic Trackpad 1, you will fairly quickly reach its ‘click’ and there will be no further movement or effect once that has been reached. There is thus no progressive effect of pressure. 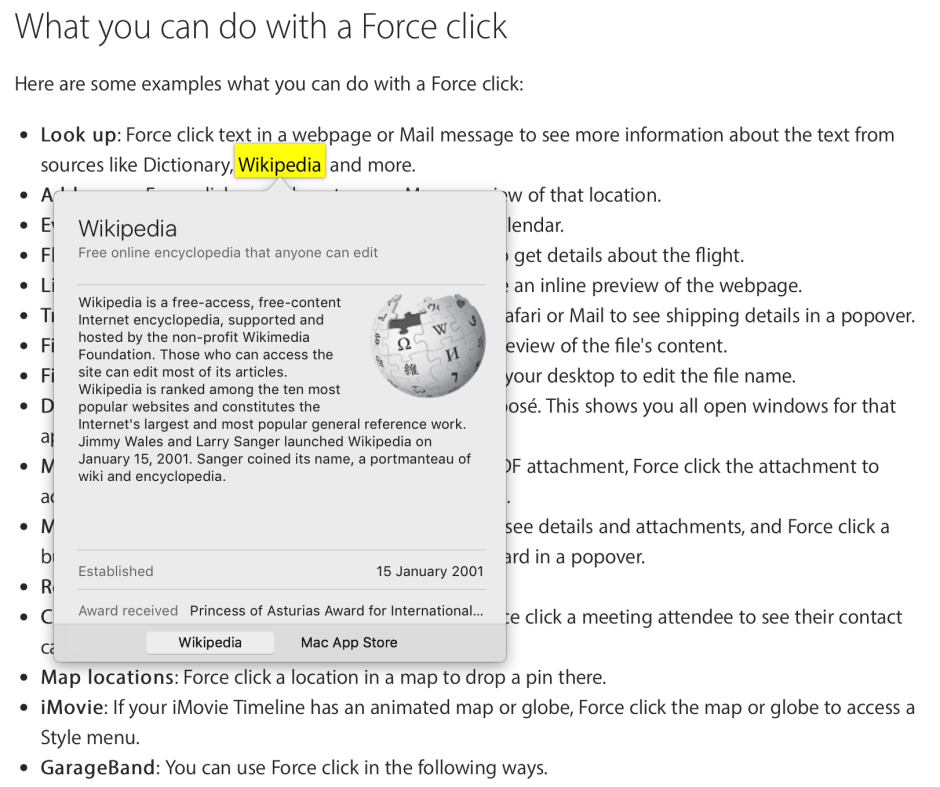 Using a Magic Trackpad 2, you will reach the first ‘click’ point, and then there will be a second, beyond which there is no further movement. Depending on the settings which you have in the Trackpad pane, at that second ‘click’ you may see the whole word highlighted, and a floating pane pop up with dictionary or web references to that selected word. That second click is what Apple refers to as the Force Click, and is a distinctive feature of the Magic Trackpad 2. If you have turned its Force Click setting off, you will not experience that second click, and the trackpad will behave much as a Magic Trackpad 1 does. 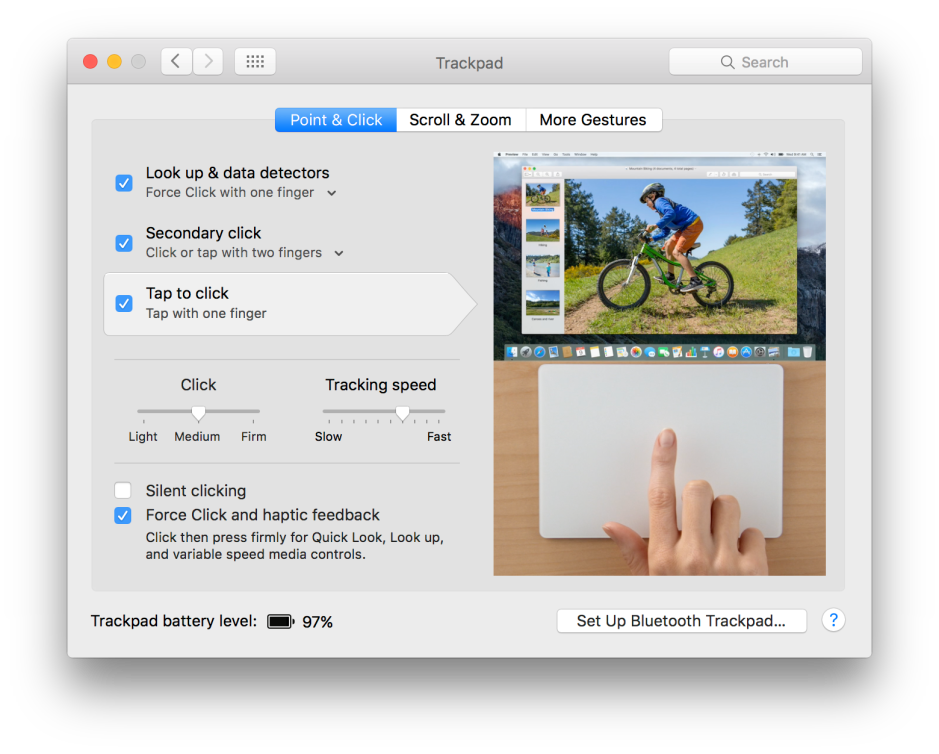 To perform click-drag selection using the Magic Trackpad 2 with Force Click turned on, the knack is not to press too hard on the trackpad and engage the Force Click. A much lighter pressure, just short of the first click, should be all that is required. You can then drag the cursor/pointer and perform the selection just as if it was a Magic Trackpad 1.

Force Touch (etc.) have been available on the MacBook Pro Early 2015 model since March 2015, the MacBook Early 2015 since April 2015, and the Magic Trackpad 2 from October 2015. Apple introduced software support for them in Yosemite, and it is now quite extensive in El Capitan. Apple details the Force Click features now available in the Finder, bundled apps such as Mail, and its own apps such as GarageBand in this technical note. 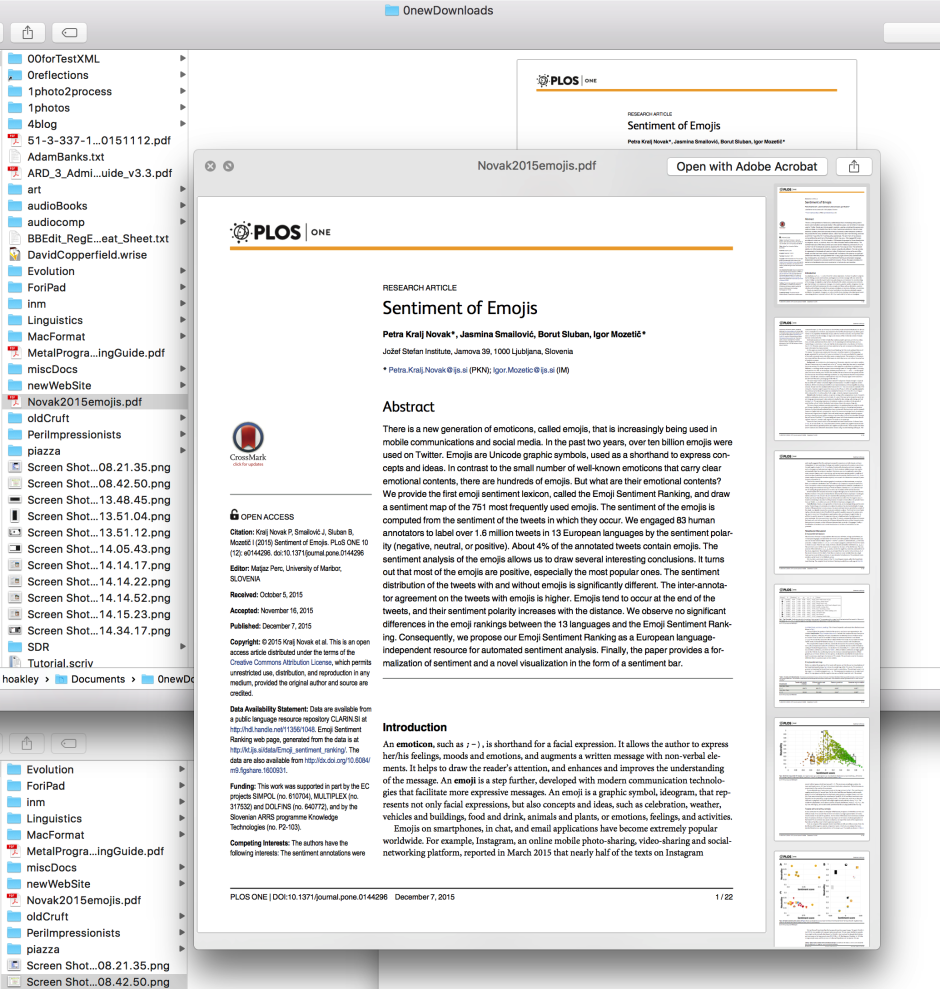 Of those features, perhaps the most generally useful is the ability to summon a Quick Look preview of any document by Force-Clicking its icon (not the document name), and this is another good exercise to practise, for example on some PDF documents.

For third-party apps to support Force Touch or Force Click controls, their developers have to write in additional code to enable those features. With the pressures imposed by the many other new and altered features in El Capitan, support is only now starting to appear, and mainly (for the moment) in drawing apps. 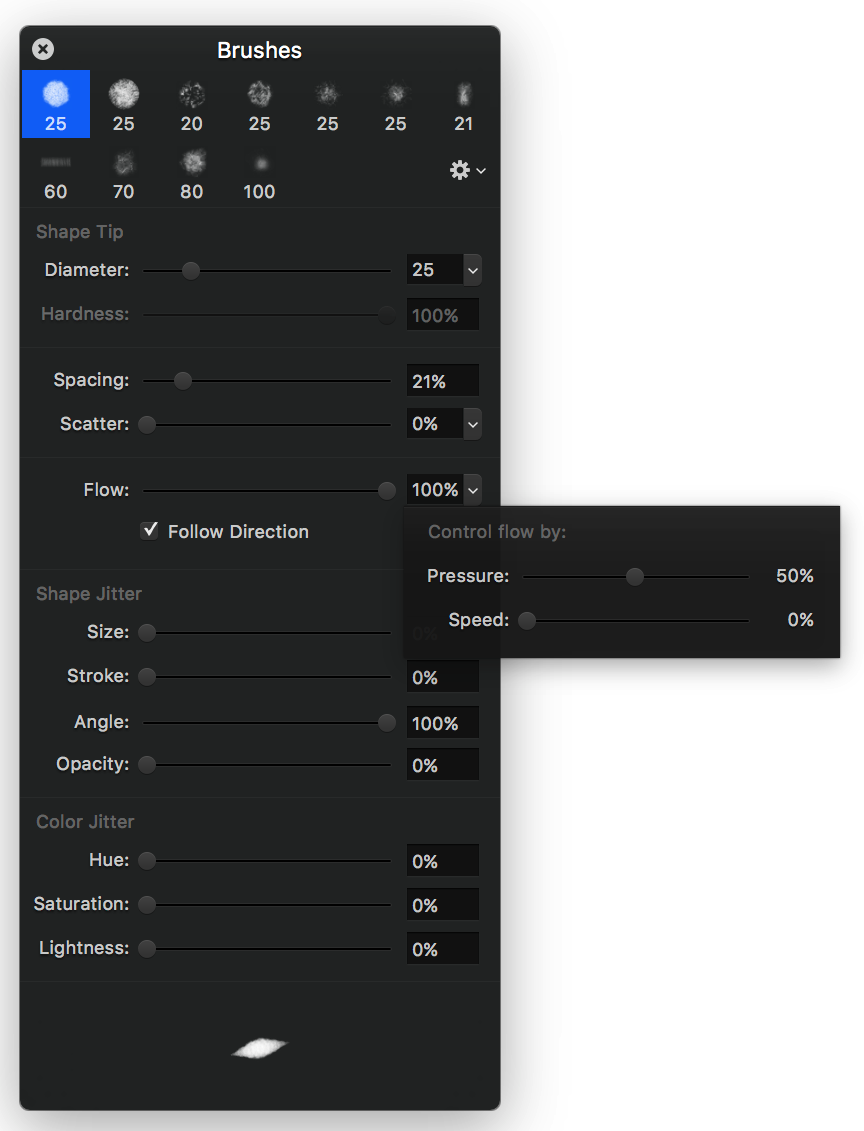 Pixelmator (App Store) claims to support pressure control from a Magic Trackpad 2. However, you need to set pressure up as controlling various settings of a brush before this will work. Even when I did this, I was unable to get any impressive haptic control over tools in the current version of Pixelmator.

Affinity Designer (App Store) supports pressure as an input control from Force Touch devices, at least in its brush and pencil tools. You will need to turn pressure on for each tool, but it does work very effectively once enabled. 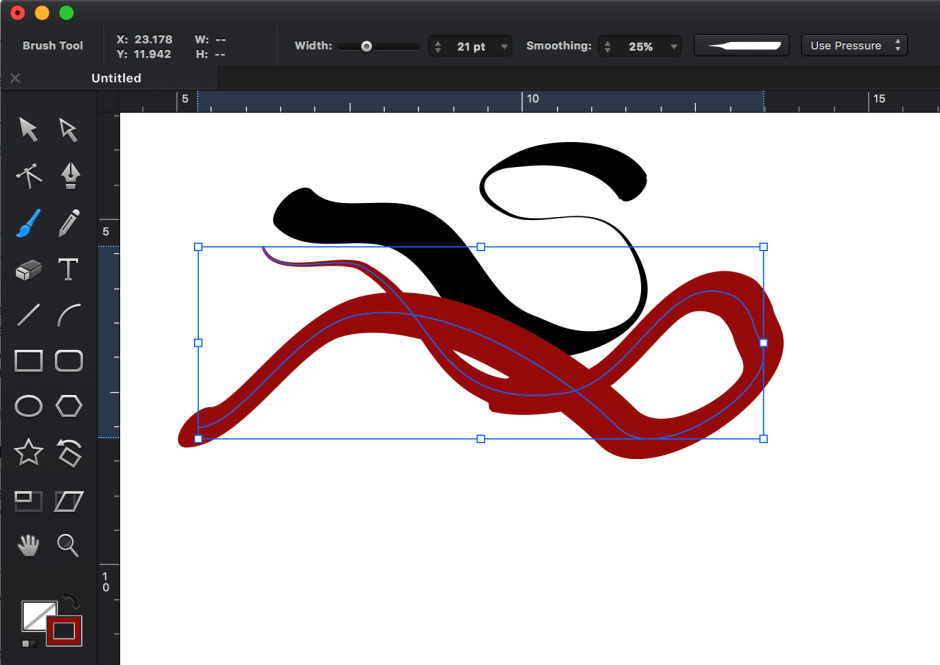 The most impressive use of haptic controls in current releases of third-party apps seems to be in Graphic (App Store), which sets pressure as a controller by default when a suitable input device is active, and works most visibly.

At present, the otherwise valuable MagicPrefs does not provide any additional controls to support Force Touch and the haptic enhancements of a Magic Trackpad 2, but hopefully they will be added in time. If you know of any third-party tools which do have Force Touch etc. support, please let me know. 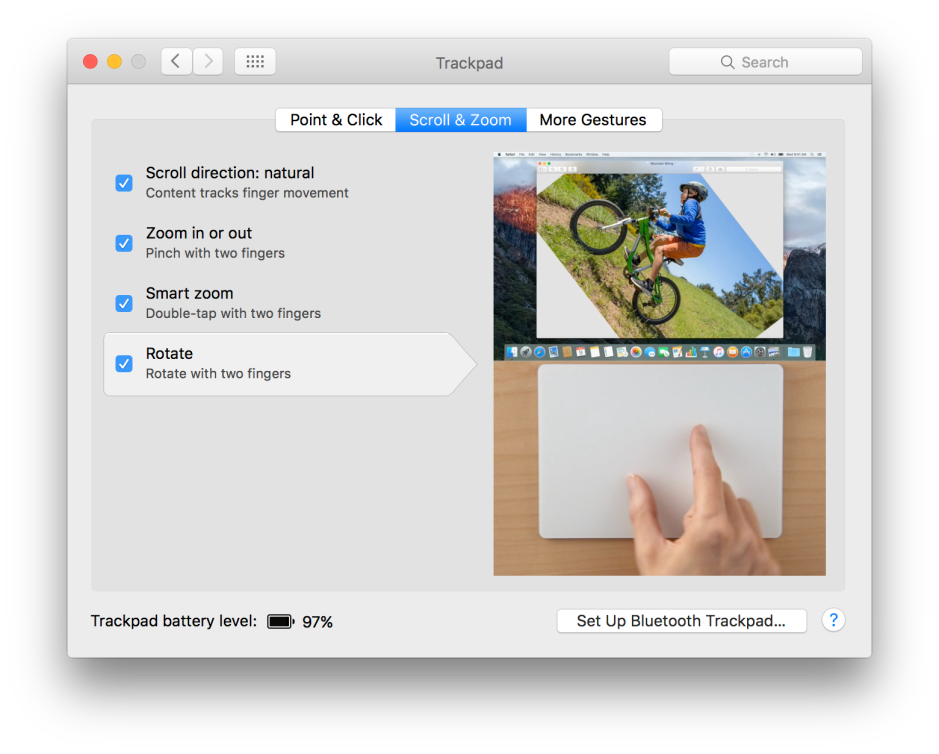 There are, of course, still two further panes of settings for trackpads which I have not touched. They do not involve Force Touch, Click, pressure, or haptic control, and are really a matter of personal preference, depending on which of those features you use. 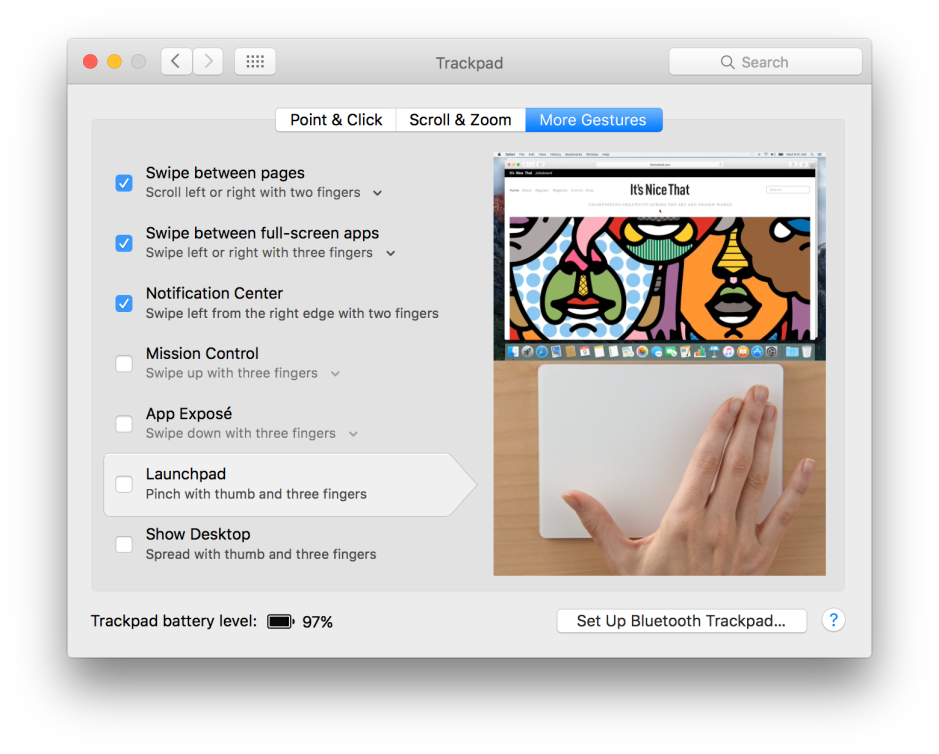 Finally, the biggest lesson for me in switching from the Magic Trackpad 1 to the new model 2 is to touch lightly unless you want the full Force Touch response. I hope that this helps.