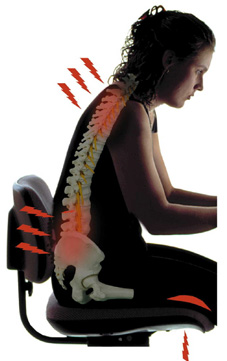 Bad seated posture is a common cause of back, neck, and leg pain. Koivuma via Wikimedia Commons.

Wonderful though Apple’s new iPad Pro is, I am already hearing of users suffering from neck pain after using one, generally when they have been typing into the on-screen keyboard rather than using its Smart Keyboard. However, similar problems can result from extended periods working at a Smart Keyboard, or indeed when using any laptop with an attached display, such as the MacBook, MacBook Pro, and MacBook Air.

The most probable – almost certain – cause of neck pain, backache, headaches, fatigue, and similar symptoms is trying to look at a display which is either in the same position as the keyboard (when using an on-screen keyboard), or immediately adjacent to it.

This is a long-standing problem for which the only solution is to separate keyboard from display, and position both appropriately. The classic layout shown below is well-proven, and strongly recommended.

Note that the forearms should be near-horizontal, with the wrists supported and straight in front of the body at about shoulder width, whilst the head and eyes should look straight ahead at a screen which is in a vertical plane, perpendicular to the gaze. It is anatomically impossible to put the hands and head in the best position for an on-screen keyboard, or one which is immediately adjacent to the keyboard.

If you are not typing for prolonged periods, most users can get away with using the display as a keyboard, or their being immediately adjacent. But you will then need to take frequent breaks from typing, so that you can assume a more comfortable posture.

Similarly, laptops should either be used as input devices with an external display, or used as the display to a suitably-positioned wireless keyboard.

These may appear to make the use of iPads, MacBooks, etc., ungainly and inefficient. However, when you are in your fifties and sixties, earlier insistence on good posture will pay off. It is much more effective than relying on your Apple Watch to remind you to stand every so often: if you work scrunched up so that you can use the same display for input and viewing, you will suffer both in the short- and long-term.

Further information about working at a computer or any other device in comfort is in this article, and I have previously drawn attention to the implications for the use of tablets and related devices here.