As I mentioned, my Promise external RAID system suffered a dead drive recently. I am delighted to report that I have replaced the drive, and it is now rebuilt, and taking my Time Machine backups again.

What did I have to do?

My Promise enclosure contains four 1 TB Hitachi DeskStar hard drives, configured in RAID 5. This is one of the most ingenious RAID levels, which is popular for its efficiency and tolerance to drive failure. Technically, it is described as ‘block-level striping with distributed parity’. Data is spread across the drives in such a way that it is stored across all the drives, in stripes, to accelerate access. Parity information, used to check the accuracy of the data, is maintained across the drives too.

This provides 3 TB of real storage from the 4 TB of disks, but only requires three of the four drives to work, for the data still to be readable. So if one drive goes down, as mine did, the RAID system can reconstruct the data which was on the missing disk. If a second drive goes down before the dead drive has been replaced, there is insufficient information remaining to recover all the original data.

Once I had replaced the dead drive – using another Hitachi DeskStar of similar specification, so that the RAID would operate as efficiently and quickly as possible – I had to open the Promise Utility app. This recognised the new drive, so I then had to add that to the RAID set, and tell it to reconstruct the contents of the drive, so rebuilding the set. 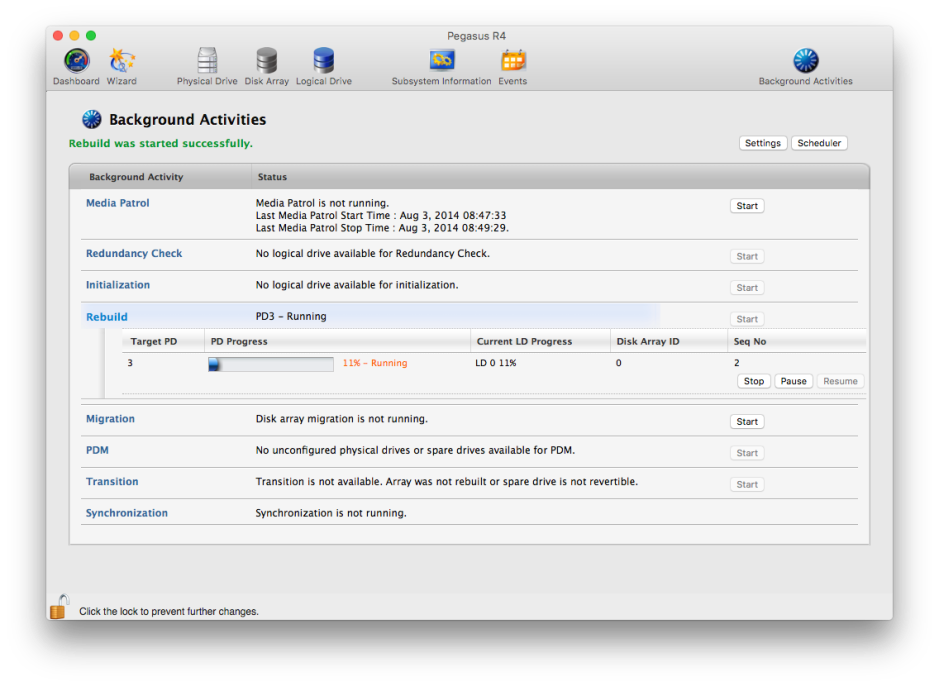 You then have a few hours – just over three, in this case – to enjoy a little anxiety, as you watch the rebuild taking place. Once complete, the Promise reported the RAID drive back up to scratch and ready to use again.

I then just had to flip the switch to turn Time Machine backups back on, and I resumed normal operations.

Like all the better RAID systems, my Promise does all this from its own firmware and hardware. If your external drive housing does not have the necessary to support such hardware RAID, you could do much the same with Disk Utility – which creates an AppleRAID software RAID system, or even better use SoftRAID, which is rather better.

Software RAID is slightly slower in the long run, as the tasks which a hardware RAID system accomplishes internally have to be performed by your Mac. It is also not as robust: bugs or glitches in the software running on your Mac can cause data corruption and loss in the RAID set. But it is still streets ahead of not using RAID at all.

One final lesson: just using RAID is not an answer. You have to use the right RAID level which safeguards your files in the event of disaster, such as sudden drive failure. Had I been using a different RAID level, I could still have lost all my backups. RAID 5 is usually a good bet, but is not always the best choice.