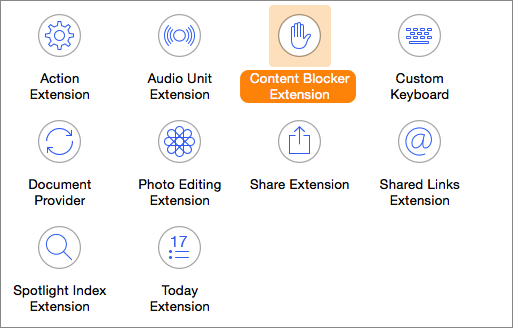 The first article in this series covered the basics of writing your own content-blocker for Safari version 9 in OS X 10.11 El Capitan. I will now move on to explain more fully the different options available for triggers and actions.

The only trigger which we used in the first article was url-filter, which set to
"https?://(www.)?nastysite.*"
to capture http://www.nastysite.com and its many variants, including under HTTPS, and
".*"
which included everything.

Resource types which can be specified include document, image, style-sheet, script, font, raw (anything), svg-document, media, and popup. These indicate how the load engine intends to use the resource, not necessarily the type of the resource. So markup containing
<img src="sheet.css">
is handed to the load engine as an image, and should be treated as an image resource type, rather than a style-sheet.

Here are some examples:

There are only two types of field which can be specified in an action: type, which must be followed by a string which defines what to do when the rule is activated, and selector, which defines a selector list to apply to a page. Hence supported action types include:

All selectors supported by WebKit are allowed in content extensions, and those can include compound selectors, and any in CSS Selectors Level 4. If you are unsure which can be used, please consult the W3C documentation and Surfin’ Safari.

Here are some example actions:

The regular expressions supported are a subset of those in JavaScript:

All strings passed as arguments to the url-filter trigger are treated as regular expressions. This means that the dot (full stop, period) appearing in domain names should be given as ‘\.’ or it will be interpreted as meaning any character: you will note that the example code given here does not always follow that! URLs are already in lower case ASCII, and expansions of regular expressions must yield ASCII.

Rules are read and parsed into Safari in the order in which they appear in the JSON file. The only exception to this is when the action ignore-previous-rules appears, in which case all the rules above that will then be ignored, and only those below it will be followed.

There is a practical limit on the number of rules which can be parsed, of around 50,000. However, long before Safari gets to that point, you will find that applying the rules takes so much time that there is little point in performing any blocking.

In addition to making minimal and most efficient use of quantifiers ?+* in the url-filter trigger, you should try to define CSS rules before any action of type ignore-previous-rules, make the triggers as specific as possible, and group together rules with similar actions. These should lead to improved performance, as well as keeping logical order within the content-blocker.