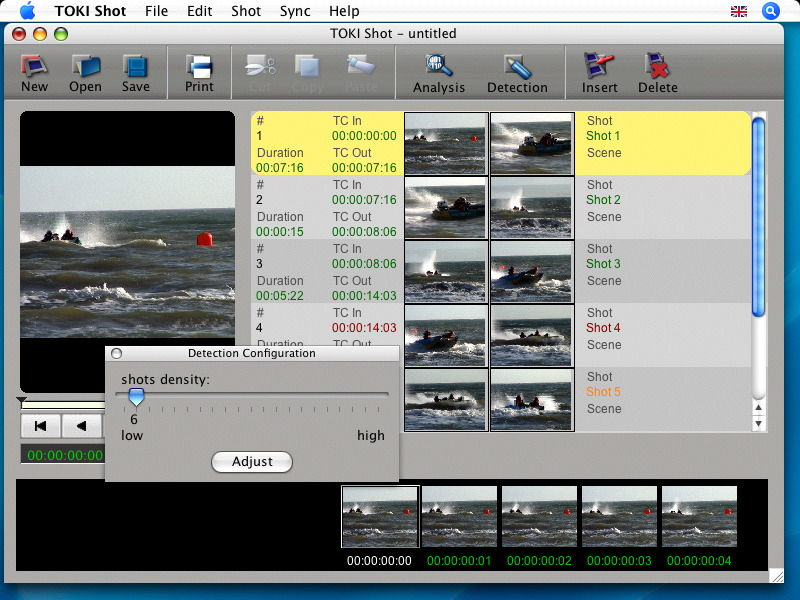 TOKI Shot in action, splitting a movie up into its constituent shots.

Euphemisms can be valuable, but too often get in the way of meaning and real debate.

If you’re interested in the language of film, you should have come across Barry Salt’s straight talking. In an excoriating blast against the hokum that purports to be much of the theory of film, in his book Film Style & Technology: History & Analysis (ISBN 978 0 95090665 2), he is one of few researchers to have taken the trouble to analyse the shot structure of many movies. This is what we might expect from a former theoretical physicist.

Barry Salt did this crucial work using a stop-watch and film viewer, manually timing and analysing every shot for 30 minutes or more of several thousand movies. Although he insists this is not hard, it is clearly laborious and error-prone. With so many wonderful films available on DVD, there must now be an easier way.

Unfortunately, versatile though DVDs are, they are not suited to this sort of precision work: interesting movies, such as Tom Tykwer’s ingenious Run Lola Run (1998), may insert just two or three frames of a particular shot, and shuttling a DVD repeatedly backwards and forwards a frame at a time is clumsy at best.

There are also strong grounds for expecting help from a few processor cores. Some cuts between shots may be tricky to detect, but most should be capable of automatic recognition. Having worked with machine vision in the past, I knew it should be straightforward to tell when successive frames switch from, say, a chiaroscuro of Franka Potente to her character’s father’s head-and-shoulders. So rather than having to step carefully through hours of movie identifying every cut by eye, software should be able to suggest where each cut occurs from frame content analysis.

I then trawled around for a product to perform semi-automatic shot analysis of QuickTime movies, as might be extracted from DVDs. Although there were some intended for observational videos, and one that was clearly seriously expensive, nothing looked as if it would cut the mustard, so to speak. Just as I had started to roll my own, I came across TOKI Shot (sadly now defunct), initially via a sister product update announcement. After parting with just £92+VAT, I tested it on my own movies, and quickly realised that this was what I had been looking for.

Once the DVD had been massaged into a suitable QuickTime format, TOKI Shot was happy to open it. Clicking on its Analysis tool, it initially split the movie into far too many shots, but this sensitivity could be tuned using the Detection tool. The aim was to get the automatic detection of cuts between shots to be as accurate as possible before resorting to manual corrections. Finally, I fed the film through a virtual Moviola showing the current frame plus or minus 5. When I found a cut that was missed by the automatic detection system, I just clicked on the Insert button, or if it had mistakenly put a cut where there was none, the Delete button.

Although this did take a little while, it was frame-perfect, and revealed fascinating insights into my subject movie.

For example, about 4 minutes 46 seconds into Run Lola Run, there is a wonderful ultra-fast tracking shot that apparently takes us from a satellite view of the city (a bit like Google Earth) down to an oblique aerial, ‘through’ a window with a concealed cut, and down a corridor to reach the iconic red phone some 7 seconds later.

Another sleight of film occurs at around 12 minutes 25 seconds, as Lola starts her first run and apparently passes straight through the camera with the aid of another cut. In these and other cases, TOKI Shot showed clearly the cunning illusion created by Frank Griebe’s photography and Mathilde Bonnefoy’s editing.

I am sure that Barry Salt would have loved to have been armed with a Mac and TOKI Shot, and would have been forthright in his approval. But alas, TOKI Shot is no more: the last version that I have here is now over a year old, and last year developer Digital Salade went to the great cutting room in the sky.

Thanks, guys and girls, for a great product, which is already missed. I’m really sad that it did not work out for you.

Updated from the original, which was first published in MacUser volume 22 issue 5, 2006.