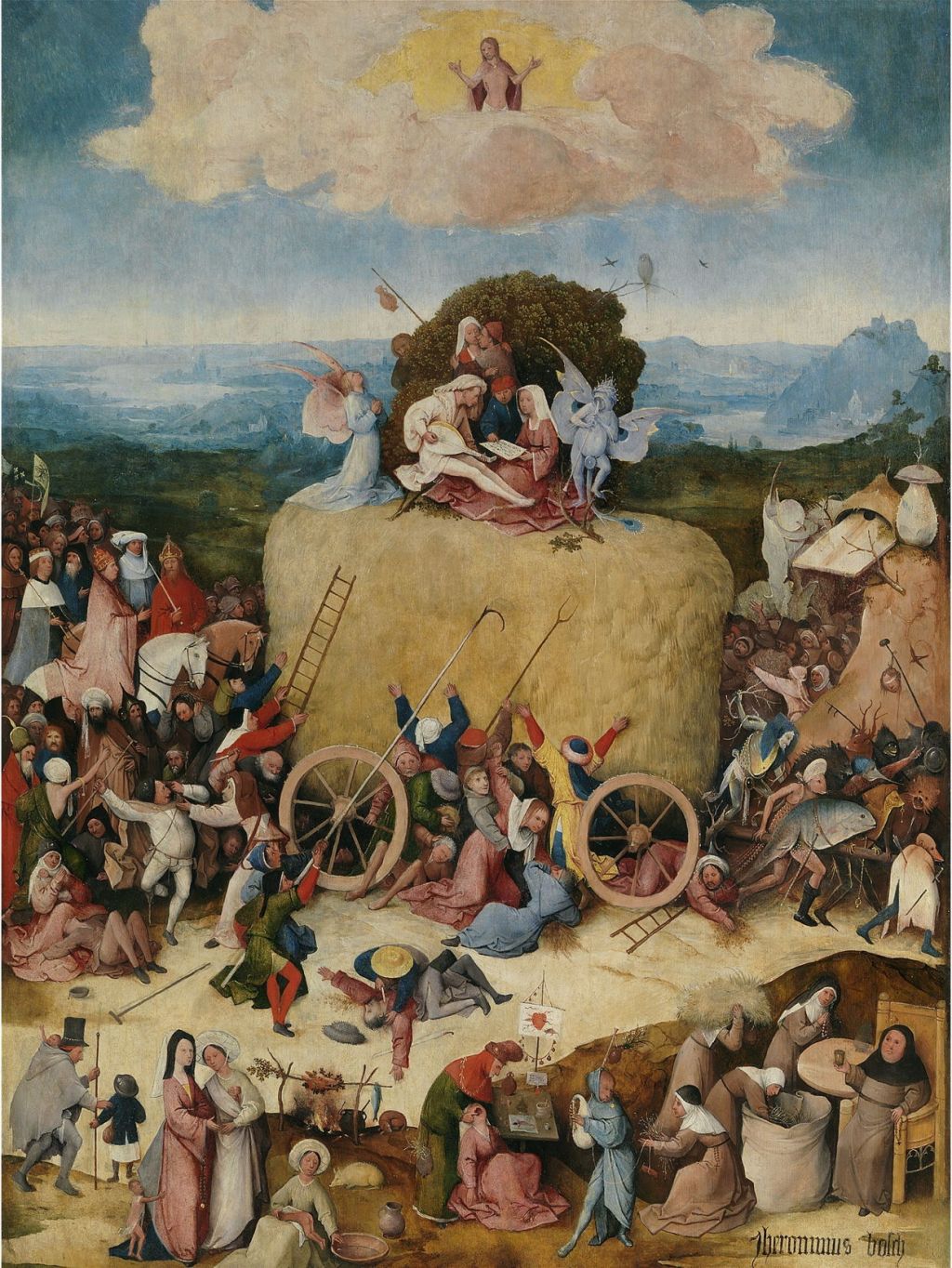 The last of the super-narrative paintings in this series is perhaps the most ambitious of them all, and is thought to be the last painting by Hieronymus Bosch (c 1450–1516) which survives today, and possibly the last work that he completed: dendrochronological evidence suggests that its oak panels date from the year of the artist’s death, 1516.

The internal panels of Bosch’s Haywain Triptych show, on the left, a multiplex account of the Fall of Man set in the Garden of Eden, with God the Father shown in the narrative content and in Heaven above, and the fall of angels occurring at the same time. The central panel shows a rich cavalcade of figures, including the emperor and Pope, nobility, courtiers, and many peasants, accompanying a huge and heavily-laden wagon of hay, which is processing from left to right. They are being overseen from Heaven by Jesus Christ. Finally, the right panel shows sinners entering into Hell and undergoing many physical torments, with its fires destroying all in the distance.

This is Everyman’s journey through life, coping with the dangers and perils around them. Starting from the fallen human, we move with the haywain, whether we are emperor, Pope, or a humble peasant. As we move through life, we are enticed into sinful ways, but by doing so risk going to eternal torment in Hell, rather than a place in Heaven. A more general allegory traces the history of mankind: from the Garden of Eden, through the Fall, to the ordinary run of the mill, before the Day of Judgement comes, and the end of the world.

As if this isn’t a grand enough story told in three panels, it’s the central painting that I concentrate on here, as it contains an almost bewildering number of smaller narratives, all set within its overall story.

At its centre is the haywain, part of a dense procession of figures slowly making their way from left to right across the middle of the panel. That chaotic rabble shows all the deadly sins: greed is dominant, together with lust, wrath, envy, gluttony, pride, and sloth.

To the left of the haywain, the emperor, Pope, king and a duke ride their horses, attended by nobility and a dense crowd of courtiers. Closer to the viewer is an assorted rabble. They include a cripple who seems to be dancing while holding his stick in the air, but is being threatened with a dagger, and a woman with a young baby, into whose skirts a young man has collapsed.

On the nearer side of the haywain several fights have broken out over the hay, and one man is cutting the throat of another, who is pinned to the ground. Figures appear trapped within and under the wagon’s wheels, with limbs about to be crushed as it makes forward progress.

In the foreground is a line of more static figures. From the left, these include a pious couple, a woman changing her baby’s napkin, behind whom a pig’s head is roasting on a spit, a quack healer who is inspecting the mouth of a patient, a person playing bagpipes, a group of four nuns working with sacks of hay, and a seated monk holding a glass in one hand and a rosary in the other.

To the right of the haywain, there are more figures packed together, but those nearer the viewer (in front of a rock pinnacle, which has odd structures on top) aren’t in the least bit human. They’re portmanteau creatures, some with long snouts, a large fish, a deer with antlers, and several daemons, who are apparently drawing the haywain itself. These are also a precursor to the daemons in the right panel. Note the blindfolded severed head being paraded on the end of a pole.

A group of eight are on top of the load of hay with a large bush. At the left, a winged angel is praying and looking up to heaven. A man is peering from behind the bush, a couple are embracing as if ready to kiss, a musician sits playing a lute for a woman who holds sheet music ready to sing, and a blue winged daemon blows a pipe. Bosch’s signature owl is perched on a branch which protrudes from the bush.

The distant landscape is of towns around broad rivers, with a high rock buttress over to the right. Above, in the clouds, Jesus looks down on the scene. He wears a red cape, fastened at the neck and leaving his chest bare, and holds his hands out to show his stigmata. Below him are miniature stories of the deadly sins of greed, lust, wrath, envy, gluttony, pride, and sloth, as our haywain makes its journey through life.