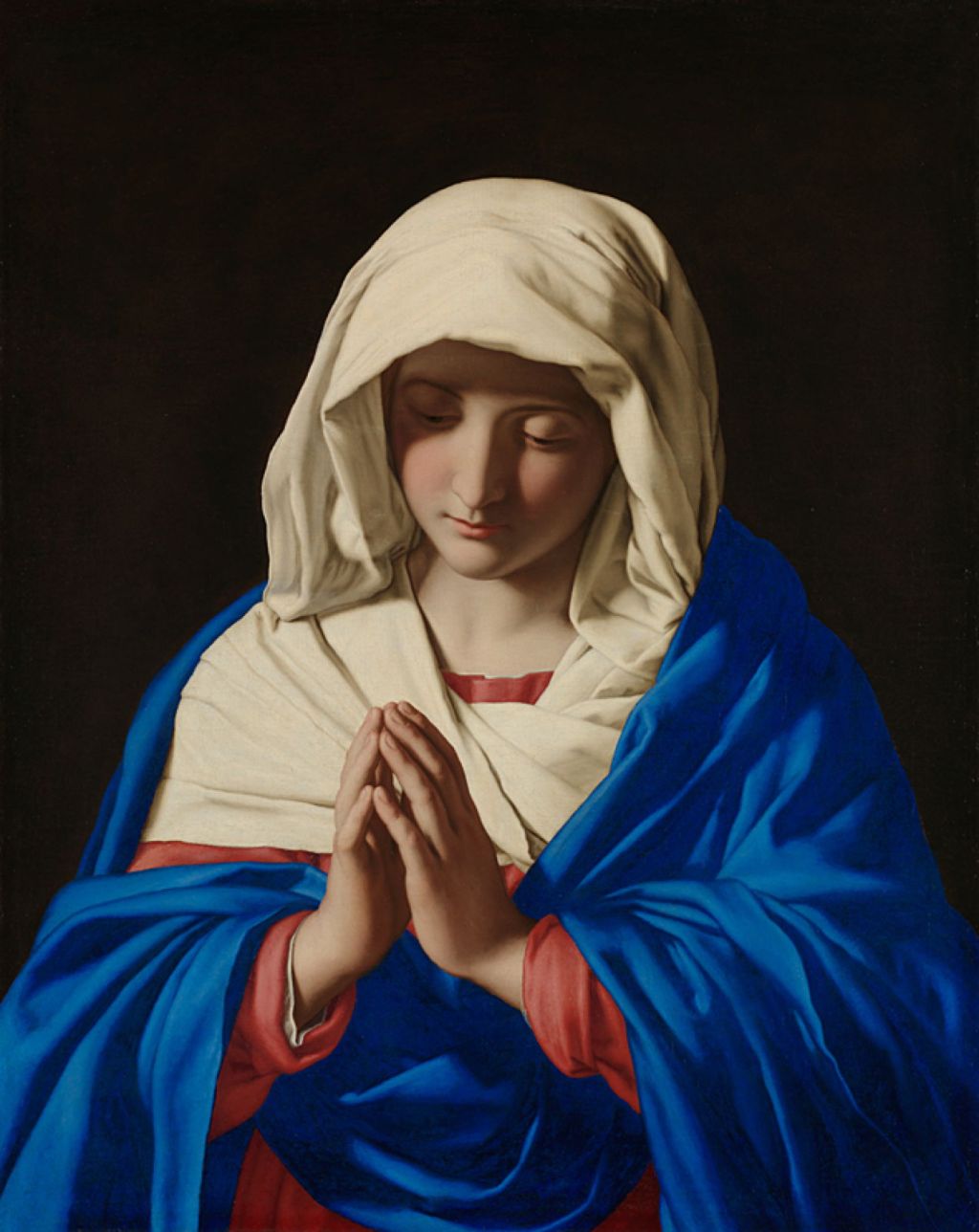 Painting is all about colour and light. Over the centuries, painters have acquired a vocabulary of different colour names based on the pigments they’ve used. This weekend I’m going to take a quick tour round a palette, to show some good examples of colours and pigments which have been widely used in the past. Today, I start with yellows, pass through orange and red to reach blue. Tomorrow I’ll progress from green to black and white. In each case, scientific analysis of the paint layer has provided objective evidence that the pigment named was used in that painting.

A family of pigments ranging from pale lemon to deep orange-red, is based on lead chromate, which had been ‘discovered’ as a mineral in the middle of the eighteenth century. Its use as a pigment wasn’t recognised until the early nineteenth century, when it became increasingly popular and versatile. During the latter half of the nineteenth century it was probably the mainstay yellow and orange in the palette of most painters.

Chrome Yellow was widely used by the Impressionists and shown at the Salon, and is demonstrated well in Paul Cézanne’s famous painting of The Railway Cutting (c 1870). I believe that most if not all of the greens seen here rely on chrome yellow mixed with blue.

This seems to have originated in glassmaking, and there is evidence of its use as a pigment in glass made as early as about 400 CE. Its earliest use in paintings seems to date back to Giotto in about 1300, following which it became extremely popular.

A fine example is Rembrandt’s Belshazzar’s Feast (c 1635-38) where it has been applied in quite thick impasto to model the highlights on Belshazzar’s cloak. Rembrandt here used a double ground, over which he applied earth pigments before applying the uppermost layers of lighter colours, including lead-tin yellow, to model the detail. These are shown in the detail below.

During the first half of the eighteenth century, lead-tin yellow declined markedly in popularity, and by 1750 it appears to have been replaced by other pigments, including Naples yellow. Once replaced, the recipes for its manufacture appear to have been lost, and its use forgotten.

This occurs in nature, in the unusual mineral Bindheimite, which it seems has never been used as a pigment. Instead, ancient civilisations in the eastern Mediterranean, from about 1500 BCE, used it to colour glass and pottery, and it’s one of the oldest synthetic pigments. By about 300 CE, it had been replaced by lead tin yellow, and fell into disuse, only to reappear as a pigment in paintings after 1600, having been reintroduced initially in maiolica (glazed earthenware) about a century earlier.

Surprisingly modern painters continued to use real Naples yellow, including Pierre-Auguste Renoir in this vase of abundant Chrysanthemums, painted in 1881-82, when new cadmium yellow was becoming more affordable.

Cadmium itself wasn’t discovered until recently (1817) and then only by chance observation. The brilliant yellow colour of its salt cadmium sulphide was noticed the following year, but it wasn’t exploited as a pigment until the 1840s, when it became possible to manufacture it in quantity. It has been claimed that it was used as a pigment for oil paints as early as 1829, and by 1851 it was shown by Winsor & Newton at the Great Exhibition at Crystal Palace in London. But it remained extremely costly.

Charles Demuth used cadmium yellow in at least two of his exquisite floral watercolours, including Fruit and Sunflowers from about 1924-25. He painted these as therapy when recovering from episodic complications of diabetes.

Both are arsenic sulphide: orpiment is a yellow form, and realgar an orange-red. Orpiment has been widely used from ancient times, and is found in a great many paintings and painted objects. Realgar is rather less frequent in European painting, at least. Being arsenic salts, they are both extremely toxic, and fell out of use during the nineteenth century, replaced by less toxic pigments.

Both orpiment and realgar have been found in Antoine Watteau’s The Italian Comedians from about 1720. It’s tempting to suggest that they saw relatively extensive use in the golden costume at the right, and the orange-red one at the lower left.

For a long time, vermilion paint was made using powdered cinnabar, naturally occurring mercuric sulphide, and is then technically referred to as cinnabar rather than vermilion. Its manufacture from liquid mercury was probably brought from China to Europe, since when much of the vermilion pigment used in Europe has been synthetic.

Peter Paul Rubens’ centre panel of the Descent from the Cross (1612-14) in the huge triptych in Onze-Lieve-Vrouwekathedraal, in Antwerp, is one of the most spectacular demonstrations of the use of vermilion, and its lasting chromatic brilliance.

Neither the Romans nor the Greeks were able to make the red extract from madder plant lightfast, but at some time between the Classical civilisations and the pre-Renaissance, someone discovered that aluminium salts would combine with the colourants in madder extract and make a pigment which was suitable for fine art painting: madder lake. Using different species of madder, adjusting the method of extracting the colourants from its root, and using different salts for the laking process, madder lakes covered a broad range of hues from pale purples through pinks to brilliant scarlet. But even when protected in an oil paint film, many faded quite rapidly, in months or just a few years.

Jan Vermeer’s Christ in the House of Martha and Mary from about 1654-56 is a good example of the use of madder lake by one of the Dutch Masters.

Centuries ago, artists started to use smalt, made from powdered blue-coloured glass, in which the active pigment is cobalt oxide. Thénard discovered cobalt aluminate in 1803-04, and recognised its potential as the pigment cobalt blue, which was quickly introduced into artists’ paints, becoming available in oil paints and watercolours from around 1806-08.

Turner’s famous painting of the Fighting Temeraire from 1839 is probably the first major painting in which cobalt blue was used so extensively, as the artist appears to have used it throughout both the sky and water.

The sole source of lapis lazuli in Europe and the West were quarries in Badakshan, described by Marco Polo and now in Afghanistan. It appears that wall paintings made around 507-554 CE adjacent to the great Buddahs of Bamiyan were the first to have used the mineral as a pigment. The powdered pigment had made its way, first along the Silk Road, then by sea, to traders in Venice by about 1300. By the Renaissance, it was established as one of the most important and precious of all the pigments used in European art.

Visit any of the larger galleries with substantial collections of paintings made before 1700, and you will see works with drapery which I can only describe as arresting in the brilliance of their ultramarine blue. One stunning example in the National Gallery in London is Sassoferrato’s The Virgin in Prayer from 1640-50. The Virgin’s cloak looks as if it was painted only yesterday, and that colour makes you stop in your tracks and draws you into the painting, like no other pigment can.

No one knows who first made Prussian Blue, nor exactly when it was first synthesized. It seems to have appeared initially around 1704, and its origins have been attributed variously to Diesbach in Berlin, or Mak in Leipzig. For once its name is appropriate, as it was a product of the Prussian Empire. Its potential as a colourant was recognised by 1710 when it went on sale in Berlin, and by about 1724 it was being manufactured in several countries across Europe.

Jean-Baptiste Perronneau’s A Girl with a Kitten from about 1743 is a fine example of the use of Prussian blue in pastels: the girl’s blue dress and the background have both been found to contain the pigment.

Like ultramarine, azurite is a mineral, but being found more widely and in more prosaic locations, it lacked the mystique of the blue from across the sea. It is formed from basic copper carbonate, the same chemical as malachite (with which it is normally found), but formed into a different crystal structure. It was known to the ancients, but used little in European painting until the Middle Ages, as Egyptian blue was more popular in classical times.

Francisco de Zurbarán’s full-length portrait of Saint Margaret of Antioch, from 1630-34, is an interesting example showing one form of discolouration which can affect azurite blue. The saint’s blue cloak has darkened in colour over time, becoming almost black in parts, particularly where it hangs down behind her. The reason for this remains obscure.