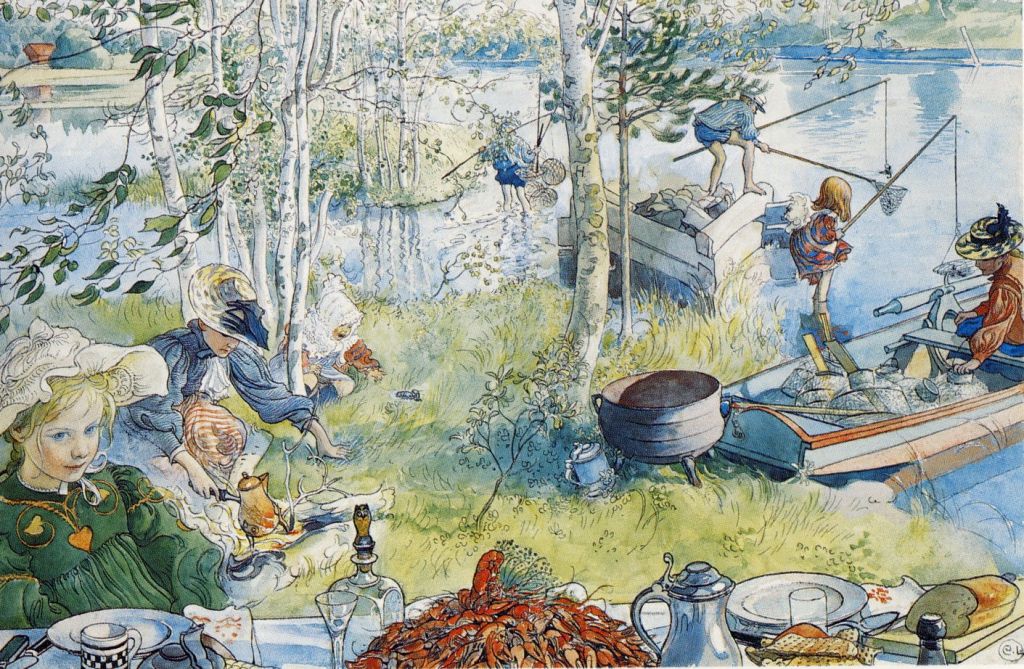 In the first of these two articles looking at anglers in paintings, I reached the early nineteenth century and its flourishing landscape art. Painters including Thomas Girtin, John Linnell and John Constable had each included figures with a rod and line fishing in the rivers they had painted. These added to the tranquillity of their rustic views with a sense of timelessness.

Constant Troyon’s undated Anglers could easily have shown a moment in Constable’s rural Suffolk, although this is surely somewhere deep in the French countryside.

The most outstanding of Troyon’s early paintings must be The Approaching Storm from 1849. Set on another river worthy of Constable, two anglers appear to be readying themselves for the torrential rain heading towards them, while others still wander in the last patch of sunshine on the far bank.

Little-known now outside his native Germany, Robert Kummer toured Scotland in 1851. Among the resulting works is this glorious view of a Scottish Landscape with Fisherman on the Shore (c 1851). Unusually, this angler is walking home with his catch, rather than still hoping.

In Camille Corot’s later years, around 1865, he painted Morning, or Cathedral of Mantes, with a Fisherman, which is both unusually colourful and innovative in its composition. The trees here don’t frame the distant subject, but dissect it, and the angler’s rod almost merges into their branches.

Corot’s The fisherman: evening effect from about 1865-70 is an unusual combination of early Impressionism and Corot’s late style of trees. It appears to have been painted very quickly, with rough daubs of clouds, and depicts the effects of transient light at dusk. Sat with their back to the viewer is an identical angler, with his bright red beret and white shirt.

Among these is the young Ferdinand Hodler’s tiny oil sketch of The Little Fisherman from about 1879. This young boy is apparently fishing on Lake Geneva.

Henri Harpignies was another French landscape painter who included anglers in several of his rustic views, including Angler, painted in 1883 when the artist was well into his sixties.

Although I’m sure that some Impressionist landscapes include the occasional angler, such staffage doesn’t appear to have been common among the core members of the movement.

Armand Guillaumin’s River Scene (1890) shows the bustling life alongside the River Seine in Paris, here with a whole party of anglers, and two yachts under sail. For much of his career, Guillaumin had to work for a living in menial jobs, and never achieved recognition as a painter. The year after he painted this, he won a hundred thousand francs in the state lottery, and was finally able to devote much of his time to art, but by that time fame had passed him by.

Jules-Alexis Muenier’s undated Angler by the Stream is a pastoral view at the edge of a village, showing a fisherman working the river close to a small wooden bridge. A woman, his wife possibly, is crossing the bridge and appears to have stopped to talk to him from there. Behind her are two magnificently pollarded trees.

Fishing is one of several summer pursuits featured in Carl Larsson’s watercolours of his family at home, published in a series of books which remained best-sellers well into the twentieth century. His richly detailed Catching Crayfish (1897) was featured in his book A Home two years later. This is the perfect summer idyll, and an aspiration for the many who bought his books.

My final painting of anglers comes from the brush of the great Canadian landscape painter and canoeist Tom Thomson. During the winter of 1916-17, others encouraged him to tackle a series of larger canvases based on his sketches from the previous year. The Fisherman (1916-17) is a medium-sized canvas which surprisingly has been rated quite poorly by critics, which I find surprising.

This is probably the closest that Thomson came to figurative painting, and appears to have been carefully composed to bring together the brilliantly lit fisherman and rocks behind, the shaded rock wall at the back of the river, and the broken water and fractured reflections on its surface. Lying on the rock at the lower right is a large fish, one which definitely didn’t get away.