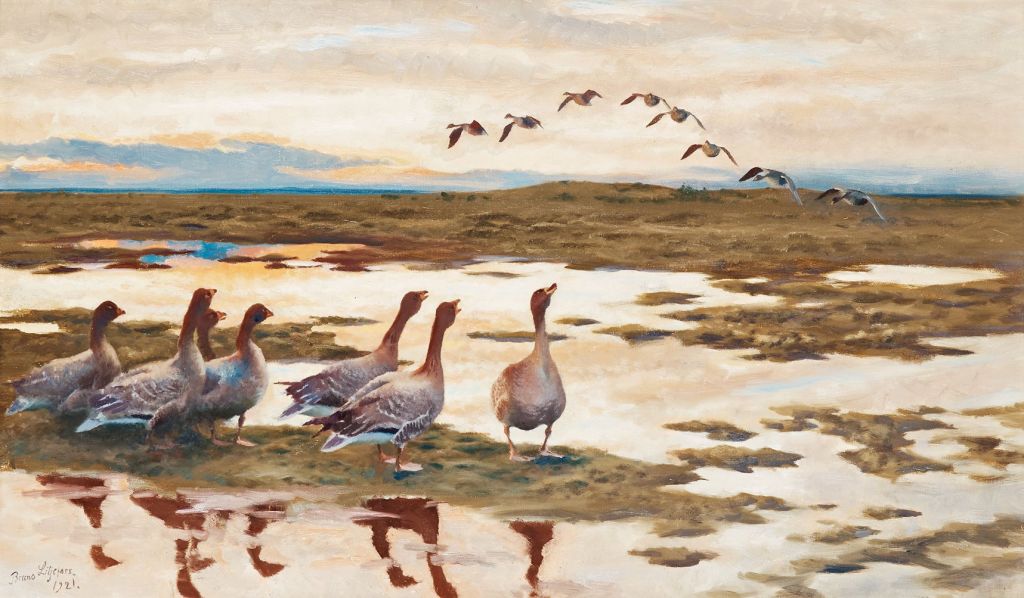 In 1921, Pierre Bonnard was at the height of his art. This selection of interiors and outdoor views starts with two of his domestic scenes, both probably featuring his partner and later wife, Marthe.

Bonnard’s The Vigil is a flood of red, either during an afternoon siesta in the heat, or in the late night. Marthe is slumped on a large chair at the right, with her dog on another chair beside her. Unlike many of his other lamplit interiors, Bonnard shows the shadows cast, but not the source of the light.

Evening by the Lamp is another of Bonnard’s lamplit interiors, although perhaps by this time the room also has electric light. Sat at this tea table are a woman, who is pouring tea and may be Marthe, with a grey-haired man.

Henri Le Sidaner painted a long series of unusual views of laid-up tables without any figures.

For his Small Table at Dusk, Le Sidaner visited the Petits Fossés at Nemours, not far from the city of Paris, on the River Loing, near where Alfred Sisley had painted many landscapes about forty years earlier. This table is laid for two, each with a bottle of beer. The overall effect is reminiscent of his earlier paintings of canals, with chairs that could have been taken from one of Vincent van Gogh’s paintings of his room in Arles.

After the First World War, Liljefors concentrated on the wildlife of Sweden’s coastal wetlands, including Bean Geese Landing above, and Geese in Wetlands below.

Hans Andersen Brendekilde’s Two Children in a Village Street shows two young girls, with a toddler playing behind them, in a backstreet of a village somewhere in the Danish countryside. One of the girls is on an errand, carrying a flask to get some milk; they appear to have stopped simply to talk. If the artist intended any social comment, it may be subtly hidden in the girls’ feet: one wears old shoes, the other none at all. But the sun is out, a rose in flower against the wall, and the world seems at peace.

During 1921-22, Enrique Simonet Lombardo was the director of landscape painting courses held in El Paular, to the north-west of Madrid in Spain. There he painted some of the finest of his late works, such as his El Paular Landscape.

In the first article of this series, I showed a figurative painting by Colin Campbell Cooper. Here he is in more familiar territory, when he had travelled back to the East Coast where he established his reputation for painting skyscrapers.

Cooper must have painted Hudson River Waterfront, New York City when he was back in his East Coast studio. The highlit and tallest building on the left is the Woolworth Building, completed in 1913, and until 1930 the tallest building in the world, at 241.4 metres. But here the clouds are also built up high, rising to belittle human structures.

Back on the West Coast, Cooper completed some exquisite paintings of the lush vegetation in California, such as his Pergola at the Hotel Samarkand, Santa Barbara. This hotel, most correctly named The Samarkand Persian Hotel, offered the height of luxury when it opened in 1920, in the buildings of what had been a boys’ school. Although it closed in 1940, the name lives on as one of Santa Barbara’s neighbourhoods.

Laurits Andersen Ring painted this View of Sankt Jørgensbjerg and Roskilde Fjord in the winter, with a windmill on the opposite bank of this low fjord in Denmark.