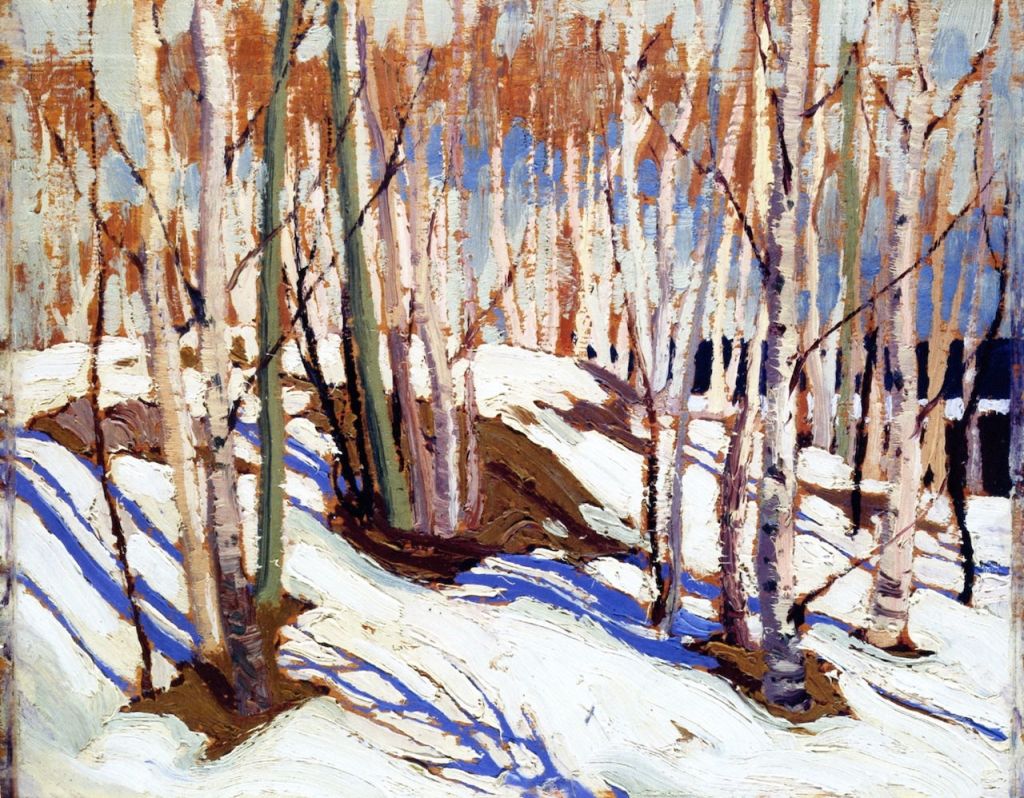 In the first of these two articles, I looked at the development of the painting of shadows, and showed some examples of shadow-play, and the use of shadows for special effects.

In the late nineteenth century, when ‘problem pictures’ became popular, several used shadows to give the viewer’s clues as to their hidden narrative.

Émile Friant’s Ombres portées (Cast Shadows) from 1891 shows a couple lit by a bright point source of light. The figure of a man is looking up imploringly at the woman, who looks aside from his gaze. The shadows tell a different story, though: his head is about to kiss her left cheek, but her shadow is distant from his.

John Collier, one of its great exponents, struck success in 1903 with The Prodigal Daughter, which remains one of his best-known works. An elderly middle-class couple are seen in their parlour in the evening in their sober black clothes and sombre surroundings. They are surprised when their prodigal daughter turns up out of the blue, in her low-cut gown with floral motifs and scarlet accessories.

Father is still sitting, backlit by a table lamp to heighten the drama. Mother has risen from her chair and is visibly taken aback. Daughter stands, her back against the door and her hand still holding its handle, as if ready to run away again should the need arise. Collier’s ingenious shadow-play shows the mother’s cast shadow much larger than that of the daughter’s, like an ogre bearing down on a helpless child.

During the twentieth century, Surrealists and others have returned to the use of shadow-play. In William Girometti’s Life in the Reflection of Freedom from 1972, one shadow is cast from the bars of a window in a prison cell, the other is shown as a combined reflected shadow from the unoccupied clothing.

By and large, shadows remained uncontroversial for over three centuries, until the French Impressionists challenged established convention that shadows were represented by changes in tone but not in colour.

Look carefully in the paintings of the old Masters, such as Poussin, and you’ll see that their shadows rarely show any significant chroma, and reflected or cast lighting effects are seldom shown.

Although most of the still life paintings by specialist Chardin follow that tradition, some, such as his Copper Water Tank, have visible colouration in their shadows. In this case, it could be argued that the reflective surface of the copper tank would be responsible.

From the early days of Impressionism, several members of the movement added colour to their shadows. Pissarro did so in this marvellous painting of Hoar frost at Ennery in 1873. The rhythmic cast shadows of trees are here dark brown where they fall on the ploughed area, and blue-green further back where they fall on frost-covered grass.

In Pissarro’s later Saint-Charles, Éragny of 1891, areas of grass which lie in the shadow of the trees are intensely green, while those in full light are gold.

In Cézanne’s Still Life, shadowed areas of the tabletop, white bowl, and other parts have quite different colours. This is even more obvious in the detail shown of Signac’s Demolisher below.

This change in approach isn’t confined to those considered to be core members of the movement: John Singer Sargent’s oil sketch of An Artist in His Studio from 1904 depicts the shadows in its crumpled sheets as being pale brown and blue, at the right.

Frederick Carl Frieseke, who excelled at paintings of dappled sunlight such as this Nude in Dappled Sunlight from 1915, includes a gamut of different colours in the shadows cast on this nude, including browns, pink, golden yellow, blue-green, and purple.

It was the Canadian landscape painter Tom Thomson who perhaps showed the most richly-coloured shadows, cast here on snow in Early Spring, Canoe Lake from 1917.

It would be absurd to suggest that these differences result from changes that have occurred in the physical world, or that these artists had different visual systems or powers of observation.

There is one well-known psychophysical effect that must be borne in mind, that of colour constancy. If you view an object with a distinctive known colour, such as an apple or orange, under a wide range of different light, with different hues and intensities, the object tends to be perceived in most conditions as having the same colour as would be seen in white light. This perceptual constancy is only lost in the most extreme lighting conditions.

If you were to measure the colour of an object objectively, then it would of course vary much more than our perception. But the painter is not just concerned with mimesis. It is not hard to make an orange really appear brown, or almost black. Should the artist then paint it according to its ‘true’ colour, what we would perceive given colour constancy, or the colour which would help us recognise that object most easily?