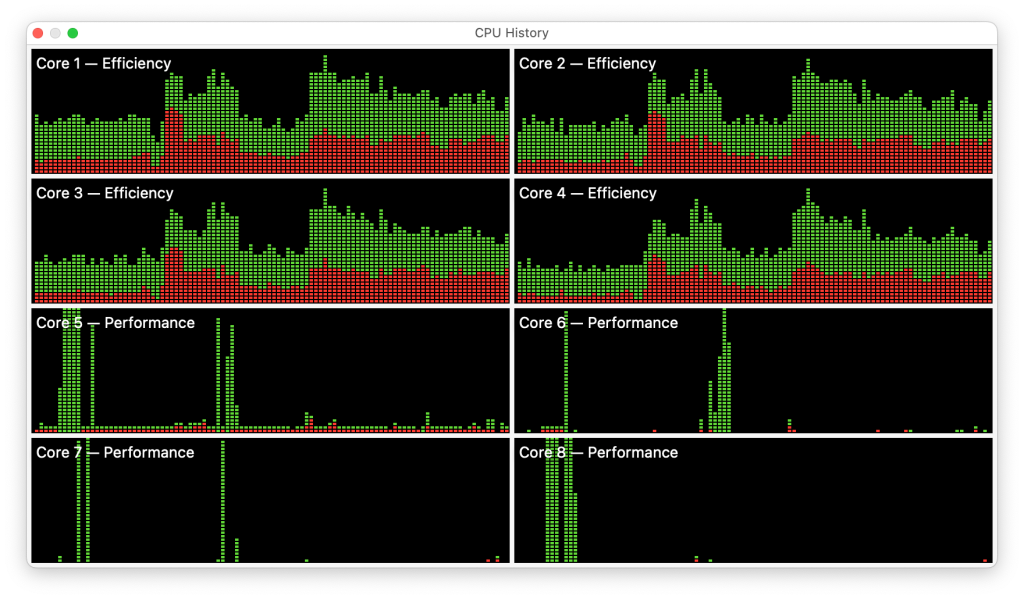 Running most benchmarks on M1 Macs – particularly the latest M1 Pro and M1 Max – may be exciting, but gives remarkably little insight into what’s actually happening in your Mac. If you want to see its Performance (Firestorm) and Efficiency (Icestorm) cores in action, and compare how they perform, you’ll have endless pleasure and fulfilment with my little utility AsmAttic 4.

This takes as its benchmark test a little floating point vector calculation, the dot product, which involves nothing more than multiplying and adding. It provides that in four different ways, including Assembly language, the macOS Accelerate library, and two different implementations in Swift. You set how many loops you want it to run – because these cores are so fast, you’ll want millions – and its ‘Quality of Service’, which determines which type of cores it’s run on. Set the QoS to slow, and it’ll be run on the Efficiency cores, set it to fast and it uses the Performance cores.

Watch what happens in the CPU History window of Activity Monitor, and you can see the load on the respective cores.

In this case, I ran a couple of tests at fast QoS, and a couple at slow QoS, while the Efficiency cores were already busy with a large Time Machine backup. It’s easy to see the two bursts of load on the Performance cores at the bottom; those on the Efficiency cores are seen in their longer-lasting increased loads.

Because AsmAttic runs each test in the background, you can set up and load a series of tests using different test types and QoS, then sit back and watch the cores handle them, and get the time taken for each from AsmAttic.

Accompanying the app is a PDF document which provides full details and source code in Assembly language and Swift for the four different tests.

I’ve spent a lot of time studying my existing M1 Macs using this app, and look forward in less than a week to be doing the same with my new M1 Pro. Whichever Apple Silicon Mac you have, this should give great insight into how it performs, rather than just how fast it is.

Sadly, this app is only built for Apple Silicon Macs, and won’t run at all on Intel models. It requires Big Sur 11.3 or later, and runs a treat on Monterey. I’ve built this with the latest version of Xcode, which should ensure it’s well-optimised for the latest MacBook Pro models too.

AsmAttic 4.0 is now available from here: asmattic4
and only from here, for the time being.