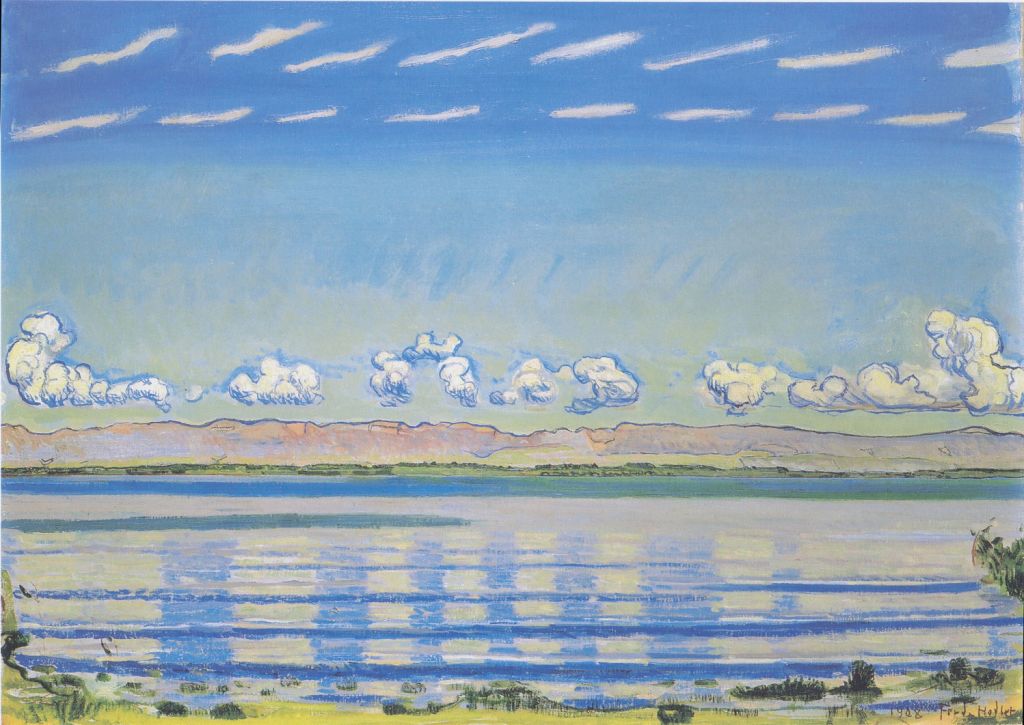 The composition of a painting is the way that its individual elements – figures, objects, trees, terrain, sky – are assembled into the complete image. Although artists have long had an interest in composition, it wasn’t until the Renaissance that composition became a distinct subject in the visual arts. This changed with the publication in 1436 of Leon Battista Alberti’s Della pittura (On Painting).

Alberti wrote about composition from Florence long before the arrival of the first true landscape paintings, such as Giorgione’s Tempest, which was probably painted in Venice around 1504-8.

With the advances in landscape painting in the seventeenth century, paintings can be broadly divided into those in which figures are the centre of attention (which I will try to avoid here), and those depicting landscapes and other non-human settings, subjects for this series.

Intuitively, landscape painting should just be a matter of selecting a view with appropriate aesthetic properties and painting a faithful representation of that. In practice, landscapes are rarely faithful, and there’s a long and continuing debate as to whether verisimilitude is even desirable, or something to be avoided at all costs.

The earliest great masters of landscape painting, notably Nicolas Poussin (above) and Claude Lorrain, painted composite images assembled from sketches and studies made from nature. Poussin’s Landscape with a Calm from about 1651 is typical of these in showing a view which never existed except in the artist’s imagination, although there’s something familiar about each of the elements within it.

Poussin was also one of the early innovators in compositional technique. Rather than just produce two-dimensional studies, he used a rig rather like a puppet theatre, into which he could insert wax figures and different planes within the landscape.

Most landscape paintings have a common major feature whose position is a key element in their composition: the horizon or skyline, dividing the sky from the earth below.

Some landscape painters, such as Jacob van Ruisdael, turned their canvases to make portraits of towering clouds, as in his View of Haarlem with Bleaching Fields from about 1665. The distant town of Haarlem with its monumentally large church of Saint Bavo – works of man – are dwarfed by these high cumulus clouds, the works of God.

One convention which has pervaded a great deal of landscape art and is still regularly featured in instructional books and courses is the division of a view into three planes, in the foreground, middle distance, and background. These perhaps equate with the equally hackneyed writing convention of a beginning, middle and end, which is popular in texts claiming to improve creative writing skills.

Eugène Burnand’s magnificent painting of Bull in the Alps from 1884 is both impressive and fascinating for his use of optical effects and extreme aerial perspective. Not only are there marked contrasts between the foreground and background in terms of chroma, hue and lightness, but Burnand has used defocussing in a photographic manner. The crisp edges of the bull in the foreground stand proud of the softer edges and forms in the middle distance and mountains in the background. He also uses an edge hierarchy, which is sharpest for the bull’s head, and softest in the most distant mountain.

One compositional device which became popular is repoussoir, the use of trees or similar vertical objects to frame a view. This can be seen as satisfying a compositional desire for a foreground where no other natural foreground exists.

In several of Paul Cézanne’s views of the landscape near his home in Aix-en-Provence, including La Montagne Sainte-Victoire au grand pin from 1886-87, he uses pine trees to frame the distant mountain, with its marked aerial perspective.

Samuel Palmer’s Shearers from about 1833-35 shows an ultimate development in the form of full framing of the landscape view by the interior of a building, taking the landscape to be a picture within a picture, a view of the world through a window.

Other compositional techniques are shared with figurative paintings, one example being the rhythm of repeated forms.

Among the most famous examples of the use of rhythm are paintings in Claude Monet’s series of poplars, in this case Poplars on the Bank of the Epte, Autumn (1891).

This reached an extreme in Ferdinand Hodler’s Parallelist landscapes, among which his Rhythmic Landscape on Lake Geneva (1908) is his clearest example of rhythm. This was a second version of a view which he had previously painted in 1905, when he wrote “This is perhaps the landscape in which I applied my compositional principles most felicitously.”

Most of his symmetry and rhythm is obvious; what may not be so apparent are the idiosyncratic reflections seen on the lake’s surface. The gaps in the train of cumulus clouds here become dark blue pillars, which are optically impossible, but are responsible for much of the rhythm in the lower half of the painting. Reflections are another compositional device which are most frequently seen in landscape rather than figurative painting.

Early ‘world view’ paintings developed into one of the most distinctive compositional types of landscape art, the panorama.

Although Giovanni Battista Lusieri was by no means the first painter of panoramas, his are among the best-developed, here in A View of the Bay of Naples, Looking Southwest from the Pizzofalcone Toward Capo di Posilippo from 1791. This watercolour is so broad that the artist had to use six sheets of paper.

Most recently, influence from the developing art of photography has resulted in some extremely unusual compositions which are influenced by the effects of camera lens projections.

Gustave Caillebotte’s view of The Pont de l’Europe from 1876 is dominated by the heavy trusses forming the bridge, and steam from a passing train. Its perspective projection is unusual, to say the least.

I hope you will join me in looking more deeply into these and many other fine landscape paintings over the coming weeks.