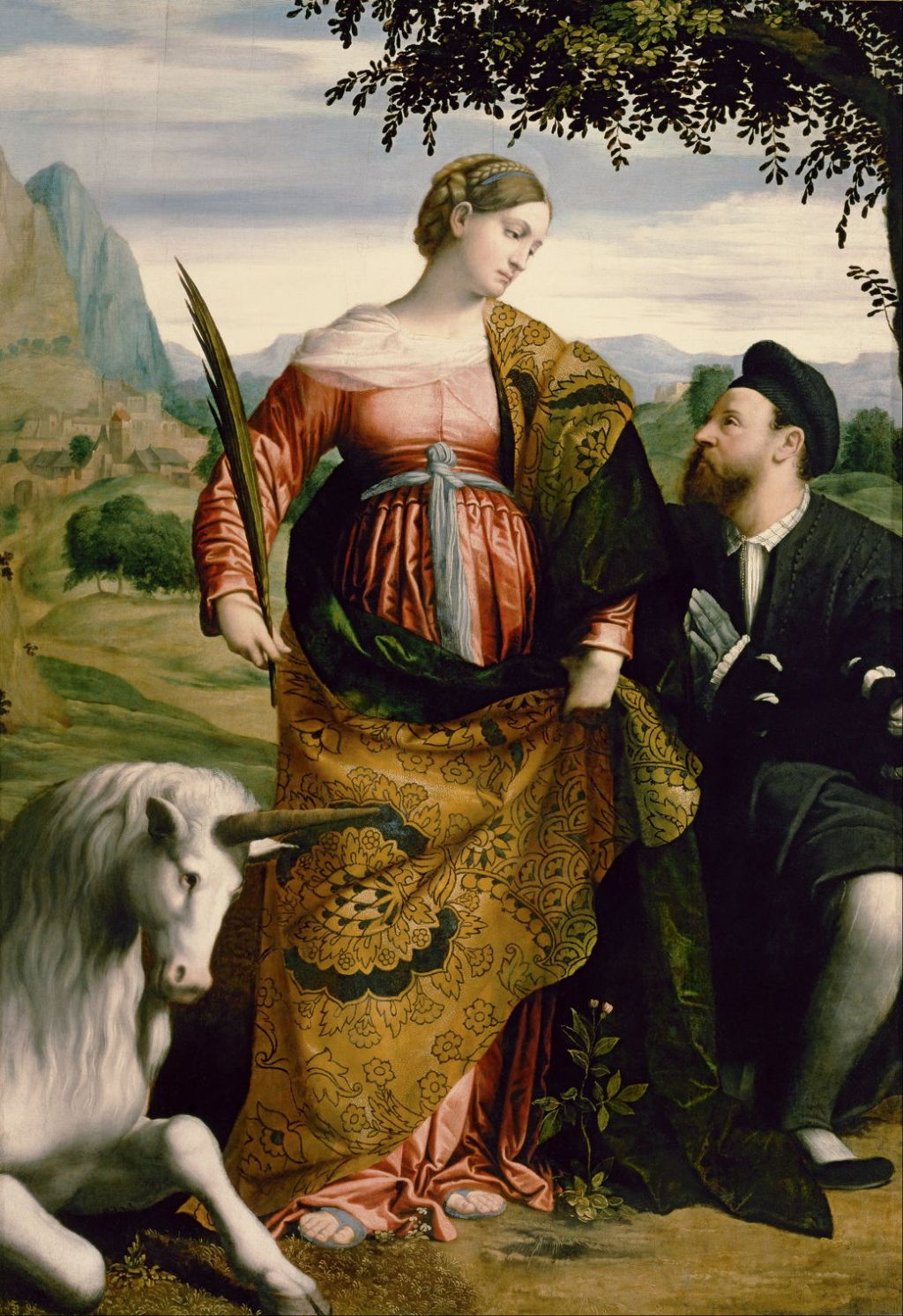 Unicorns aren’t legendary beasts at all. In classical Greek times, they didn’t feature in myth or legend, but in the natural histories written by Strabo and others. Artists well into the Renaissance also appear to have been convinced of the existence of the species, painting them alongside real animals in non-mythological works. In this and tomorrow’s articles I look at paintings of unicorns from the beginnings of ‘modern’ art in the fifteenth century to the twentieth.

Unicorns have their roots in ancient Indo-European civilisations, and have permeated through many subsequent cultures. Although they do vary, by the Middle Ages most had settled on a horse-like creature with a single and straight long horn on their forehead. They became associated with virgins and chastity, so are usually coloured white.

In Francesco Pesellino’s Triumphs of Love, Chastity, and Death from about 1450, the cart at the right, representing chastity, is drawn by a pair of golden unicorns. They contrast with the hearse at the right edge, which is drawn by two black oxen, and love’s chariot at the left, with its four white horses.

The two brown unicorns in Piero della Francesca’s The Triumphs of Federico da Montefeltro and Battista Sforza (1472) have the same meaning. Here they’re drawing Battista Sforza, the Duchess of Urbino, towards her husband the Duke. Accompanying the Duchess on her carriage are the personifications of Charity, Faith, Modesty and Chastity.

Towards the end of the fifteenth century, one of the most important tapestry cycles was woven in the Southern Netherlands. This is the common ancestor of all European paintings about the five senses, and centres on the mystical Lady and the Unicorn (1484-1500). In that cycle, The Sense of Touch shows the common figures of the lady and a unicorn, surrounded by animals and objects amid the mille-fleurs. As in the other tapestries in the cycle, its references are symbolic and now quite obscure.

The first artist to feature unicorns in several of his paintings was Hieronymus Bosch. These are best known in his Garden of Earthly Delights, but appear in at least another two of his works.

In the left panel of The Garden of Earthly Delights (c 1495-1505) is a curious mixture of real and imaginary creatures. There’s an elephant and a giraffe, both early depictions of the species, together with monkeys, brown bears, rabbits, and more. But there too is a carefully painted white unicorn drinking at the lake on the left.

Bosch included a similar fountain-tower in the left wing of The Last Judgment (c 1495-1505), where there’s another unicorn, this time red-brown in colour and being ridden by a naked figure.

In the centre panel of Bosch’s triptych of The Hermit Saints Anthony, Jerome and Giles, on the table by Saint Jerome is a relief on a tablet, showing someone trying to mount a unicorn.

Once thought to have been painted by Raphael, this portrait of a Young Woman with Unicorn from about 1506 is now believed to have been painted by Ridolfo Ghirlandaio (1483-1561). It has been claimed to show Giulia Farnese (1474-1524), the sister of Pope Paul III, who became Pope Alexander VI’s mistress. Until it was cleaned and overpainting removed, the unicorn remained undiscovered, and it was thought to be a portrait of Saint Catherine. The inclusion of a unicorn as a symbol of chastity may well have been a mark of irony on the part of the artist, or wishful thinking on the part of the sitter.

More safely attributed to Raphael and his workshop is this scene from the first bay of his Loggia in the Palazzo Apostolico. Its four scenes of the Creation end with The Creation of the Animals. God the Creator walks among a marvellous collection of animals and birds. Notable among these are a unicorn, below God’s left hand, and an early image of a rhinoceros at the right. This suggests that to Raphael the unicorn was as real as a rhinoceros.

Bernardino Luini’s Procris and the Unicorn from about 1520-22, is a fresco with one of the few mythological appearances of a unicorn. However, the literary sources that I can find on Procris don’t involve any unicorns, and the figure shown at the left edge doesn’t appear to be female, as Procris was. She is best-known for being killed by her husband Cephalus unintentionally.

More typical is Moretto da Brescia’s painting of Saint Justina with the Unicorn, Venerated by a Patron from about 1530-34. This saint, the patron of the city of Padua in Italy, took a vow of lifelong chastity, so the unicorn has become one of her attributes as a symbol of that chastity.