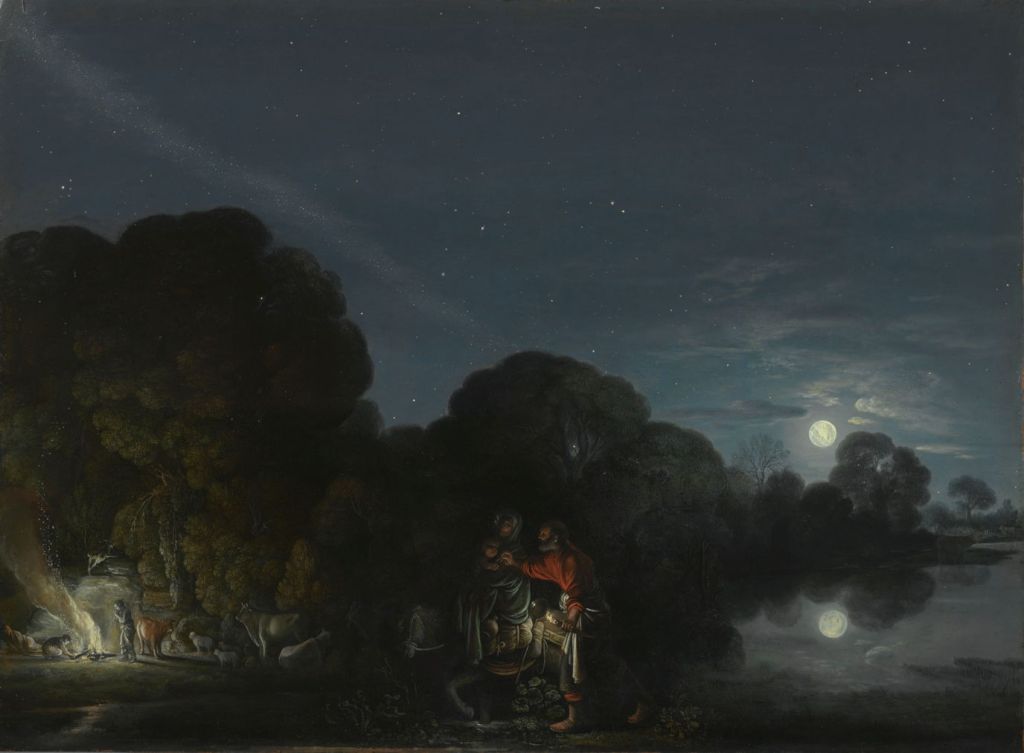 Normally the last event in the European Nativity cycle is the flight to Egypt, as described in the Gospel of Matthew Chapter 2 verses 13-23. Once the three Magi had left Bethlehem to return to their eastern kingdoms, Joseph had a dream in which an angel appeared, warning him to flee to Egypt immediately, with Mary and their newborn infant Jesus. This was because King Herod would try to seek the child out in order to kill him, in what became the Massacre of the Innocents, which in the Catholic tradition is normally commemorated on 28 December. So here on Boxing Day is a selection of paintings of the flight to Egypt.

Fra Bartolomeo’s The Rest on The Flight into Egypt from about 1500 is a traditional composition showing Mary and Joseph during their journey to Egypt. The more distant landscape is less detailed, but his donkey and palm trees are delightful. This was one of the last paintings which Baccio della Porta, as he still was at the time, made before he became a Dominican friar; he entered the monastery of San Marco the following year. He destroyed many of his earlier secular works, then stopped painting completely for several years.

When Fra Bartolomeo started painting again after 1504, it was only appropriate that he should return to the same motif. In this version from about 1509, he became one of the first artists to use an asymmetric variant of multiplex narrative which is more subtle, and may have been seen at the time as progressive. Joseph and Mary are shown in the dominant scene with the two infants. In the distance at the right is a couple, dressed identically, undertaking the same journey. They too are Mary and Joseph, and remind the viewer of the underlying story.

Maerten van Heemskerck’s The Rest on the Flight into Egypt from about 1530 is more of a conventional portrait of the Virgin and Child, with no strong visual clues such as palm trees that they are in the midst of a journey intended to take then away from Herod’s clutches and into Egypt.

Tintoretto’s Flight into Egypt from about 1582 shows the Holy Family hiking their way through a lush valley, with tougher terrain in the distant hills. In the background, local peasants are fishing on the river, and there’s a small town behind their humble farm. In the far right foreground, a rough wooden cross is a poignant reminder of what was to come in Christ’s adult life. The rope by which Joseph is leading their donkey forms a pictorial link with Tintoretto’s Passion scenes up in the albergo of the Scuola Grande di San Rocco in Venice.

Then at some time around 1600, Adam Elsheimer painted, in oil on copper, one of his most brilliant nocturnes, The Flight into Egypt. Under the soft light of a full moon, the Holy Family are about to enter a small camp of other refugees, set around a fire. Look closely and you’ll see a little echo of the Nativity itself, with ox, ass and sheep at the far left. (This could be multiplex narrative, of course, but Elsheimer provides no visual clues to confirm that.) Above them is the vast sky, with recognisable constellations and the wonder of the Milky Way, whose mythical origin is in the breast-feeding of the infant Hercules.

Philipp Otto Runge’s Rest on the Flight to Egypt (1805-06) is another unusual depiction of this story. The Holy Family are resting at dusk around a small fire tended by a dreamy-looking Joseph. The infant Christ – who looks like a real baby for once, if slightly older than newborn – is staring up at a strange tree which is covered with large white flowers and a couple of winged angelic children, one of whom is playing a harp.

William Blake’s Virgin and Child in Egypt from 1810 is one of his unusual glue tempera paintings in which he achieves fine modelling of flesh. Like van Heemskerck’s painting above, this is in essence a Virgin and Child against Blake’s imagined view of the pyramids, and a tiny sphinx, together with the River Nile and the city of Cairo.

Luc-Olivier Merson was skilled at taking traditional if not hackneyed stories and reinventing them in haunting images. His version of the Rest on the Flight into Egypt (1880) shows the Virgin Mary cradling the infant Jesus at the foot of a sphinx, whose head is turned up to stare at its vast nighttime sky. I suspect that he had seen Elsheimer’s nocturne, but arrived at a completely different view.

Like Fra Bartolomeo before, my last artist painted at least two different versions of this motif.

In about 1907, Henry Ossawa Tanner painted The Flight into Egypt in which he strived for geographical authenticity in its sketchy composition.

Tanner’s second version of the Flight into Egypt from 1923 is another nocturne following Elsheimer’s example, but sets a totally different scene in the narrow street of a town. He uses light skilfully, with the cast shadow creating the effect of a halo around Mary’s head, as she cradles the infant Jesus on her donkey.