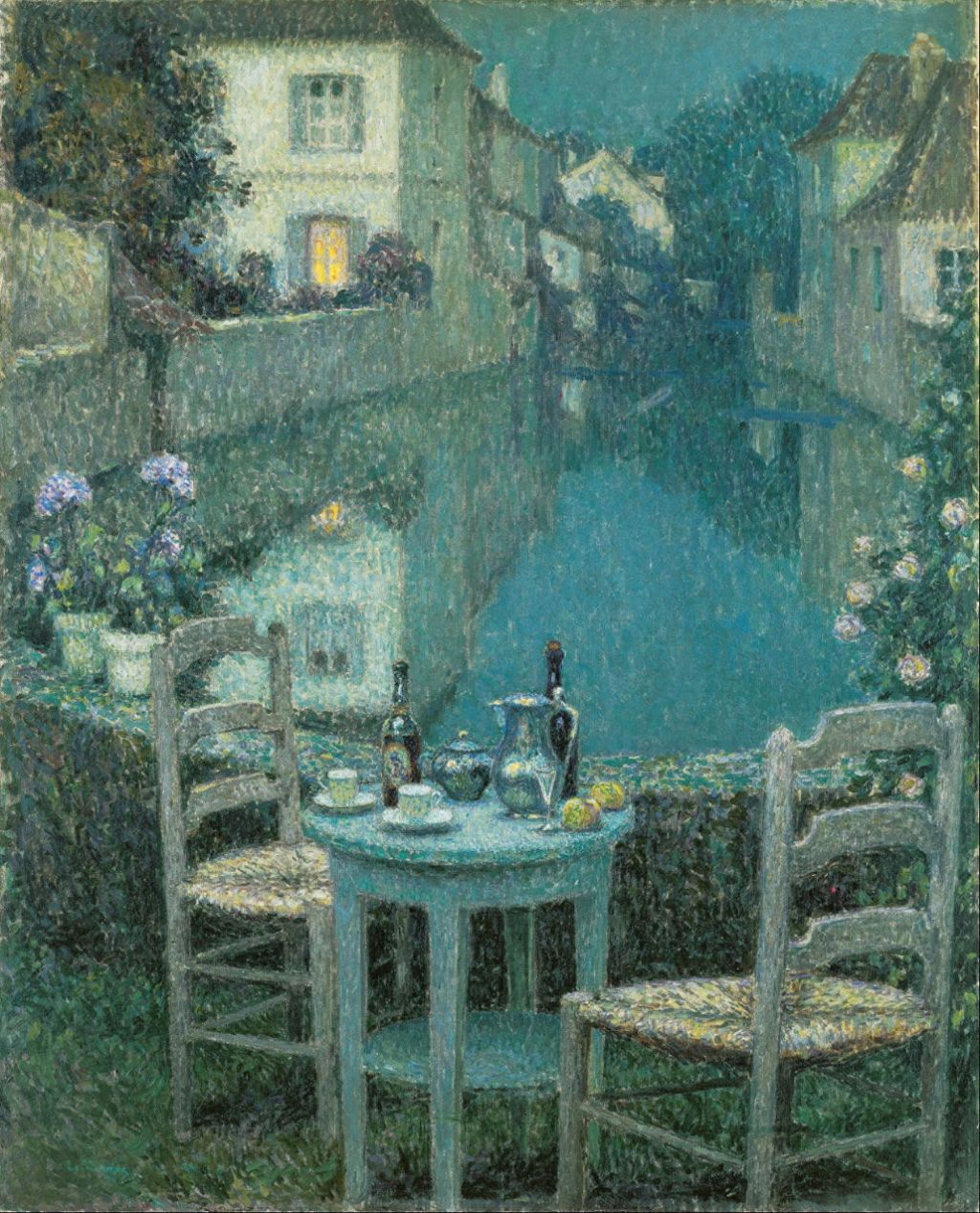 By the early twentieth century, as I showed in my first article, the French-Mauritian painter Henri Le Sidaner (1862–1939) had developed a particular interest in lighting effects of twilight, expressed in paintings with his distinctive facture of fused fine marks.

Le Sidaner clearly developed a reputation, although perhaps this wasn’t quite what he had aimed for. Marcel Proust mentions him in the fourth volume of his series In Search of Lost Time, where the artist is described as being “highly distinguished” but “not great”. French novellists have a track record of trashing contemporary painters, though, as Émile Zola did of Paul Cézanne.

Le Sidaner visited Britain on several occasions, and in 1906-07 painted this view of St. Paul’s from the River: Morning Sun in Winter, which may have been inspired by Monet’s series paintings of Rouen Cathedral, although here expressed using Le Sidaner’s distinctive marks.

Roses and Wisteria on the House from 1907 is one of the artist’s favourite twilight scenes, here showing the front of his house in the old village of Gerberoy.

During another visit to Britain in 1908, Le Sidaner visited the sixteenth century royal palace at Hampton Court, upriver of the Thames from the city of London, which he painted as Autumn at Hampton Court. This is perhaps his most Impressionist work, with its much wider range of different marks and the rich colours of dawn or dusk.

In about 1910, Le Sidaner followed in the brushstrokes of the Divisionists in his Fog in the Midi.

For this ghostly nocturne of the River in the Moonlight, Quimperlé, from about 1910, Le Sidaner visited this town in Brittany, in the far north-west of France. The perspective projection is unusual in giving the impression that the river is flowing down quite a steep gradient, and as usual its streets are deserted.

At about this time, Le Sidaner started to paint deserted tables in carefully composed views.

The Table, Spring from 1913 is an early example, with a range of drinks laid out for one person in the foreground of a gently rolling country landscape in Spring. Leafy branches provide formally symmetric repoussoir.

His Autumn Table, painted some time in the decade 1910-20, is laid out for two, with a fruit bowl to suit the season as well as drinks, and the façade of a large house, perhaps the artist’s, behind. The leaves have already turned to gold on the creeper covering the wall of the house.

He continued to paint his established views, including this richly Golden Morning from 1920.

Like several other artists in the early twentieth century, Le Sidaner visited the Mediterranean coast of France. When there in 1920, he took the opportunity to paint this view of Table of the Sea, Villefranche-sur-Mer. This table is laid for one, and beyond its balcony is a small bay. His marks are coarser here, some consisting of quite thick daubs of paint, suggesting that this was more of a sketch than most of his other tables.

For his Small Table at Dusk from 1921, Le Sidaner visited the Petits Fossés at Nemours, not far from the city of Paris, on the River Loing, near where Alfred Sisley had painted many landscapes about forty years earlier. This table is laid for two, each with a bottle of beer. The overall effect is reminiscent of his earlier paintings of canals, with chairs that could have been taken from one of Vincent van Gogh’s paintings of his room in Arles.

White Garden at Dusk from 1924 looks like a corner of the artist’s garden in the old village of Gerberoy.

In 1928, Le Sidaner painted this view of a steep alley in Church Road, Villefranche-sur-Mer. Judging by the angles of the shadows here, this is one his relatively few paintings in which the sun is high in the sky. There are even a few people ascending this hill towards the church.

In his later years, Le Sidaner seems to have abandoned his career-long fascination with twilight, and his distinctive facture, to paint a more conventional view of his home in White House, Gerberoy from 1934.

Henri Le Sidaner died in the summer of 1939, just short of his seventy-seventh birthday. A couple of months later, Germany invaded Poland and the world was again at war.