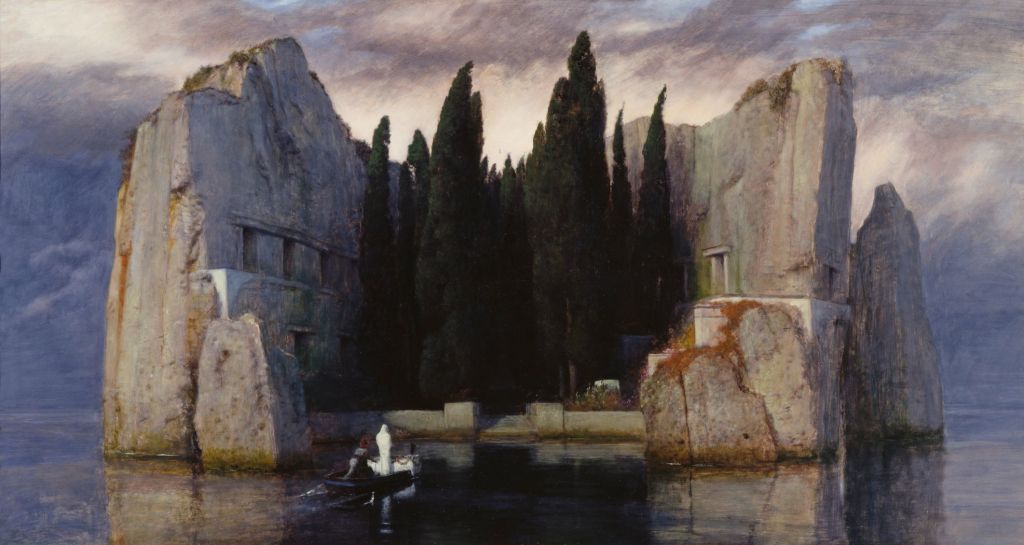 In my first article about the Swiss artist Arnold Böcklin (1827–1901) and his landscape paintings, I featured his masterpiece Villa by the Sea. This sequel looks at the landscapes of his later career, and his greatest work, Island of the Dead.

In the early 1870s, he worked in Munich again, then spent almost a decade more settled in Florence, until 1885.

Spring in a Narrow Gorge (1881) seems to be a straightforward landscape painting, of a few birch trees in fresh Spring foliage (although the reference in the title is not to the season), in a narrow gorge. The water source given in the title quite probably runs among the rocks at the base of the gorge, but isn’t readily visible.

Summer Day (1881) shows a small river meandering through meadows, with summer flowers out on the grass, and white blossom on the strange-looking trees. In the background is a town, and half a dozen children are playing in or near the water, in the foreground. It has an air of calm and timelessness, otherwise it doesn’t seem to beg any deeper reading.

Ruin by the Sea (1881) makes its intent clear. The ruins of an old building are just above the waves. Growing within the broken walls are three cypress trees which lean away from the prevailing wind. Above them the sun’s rays break through banks of cloud in a dramatic light, and a large flock of crows are arriving to perch on the top of the walls.

The ruin represents decay, perhaps that of later life, and the crows are harbingers of death. Cypress trees also have a strong association with cemeteries.

Many artists associated with ‘Gothic’ Romantic and Symbolist movements painted groups of worshippers within ancient trees, often under the same title as Böcklin’s Sacred Grove, from 1882. The nine figures here are shrouded in white habits indicating their religious association. On top of a stone altar is a bright flame, at which three of them are bent low and kneeling in obeisance. Behind the grove, in the distance, is what appears to be a large stone building like a temple or monastery. In the foreground is a large pond in which white flowers are starting to open. However, the foliage of the trees indicates that it is autumn/fall.

Between 1880 and 1886, Böcklin painted a total of five different versions of his most famous work, Island (or Isle) of the Dead. Each shows a similar island, probably based in part on the English Cemetery in Florence, where his own baby daughter had been buried. Each shows the deceased being rowed across to the island, which calls on the classical myth of Charon, who rows the dead over the rivers Styx and Acheron to the underworld.

Böcklin painted the first version in 1880 for his patron Alexander Günther. This shows the boat just outside the harbour of a small rocky island which appears to be lined with mausoleums. The light is remarkable, seemingly a bright twilight, against dark water and sky. However the direction of travel of the boat is ambiguous, as it may actually be moving away from the island and towards the viewer.

While Böcklin was working on that version, the widow of a financier, Marie Berna, visited his studio in Florence, and commissioned a smaller version in memory of her first husband, who had died of diphtheria in 1865. For this, the artist added the standing figure and coffin, which he also added to the first version. At that time, Böcklin had titled the painting Tomb Island.

The third version of Island of the Dead was painted in 1883 for Böcklin’s dealer. The first two versions had encountered criticism. Böcklin accordingly changed the lighting and closed in on his motif, making this version much clearer that the boat was entering the island’s tiny harbour. Although less dramatically lit, this adds clarity to the most important part of the painting, as shown in the detail below.

He painted a fourth version in 1884, which was sadly destroyed during the Second World War.

The fifth version was commissioned by the Museum of Fine Arts in Leipzig, and was painted in 1886.

In 1888, Böcklin painted a complement, with the title Island of Life, and in the year of his death, a sixth version was in progress, which was completed by his son Carlo.

A great deal has been written and speculated about this remarkable series of paintings. Böcklin evokes mood, of a poignant calm, of death and loss. During the 1880s, its reputation grew. It was reproduced as a print by Max Klinger which sold strongly. Reproductions were bought by the Swedish artist Prince Eugen, and Georges Clemenceau, Prime Minister of France. By the early twentieth century, several artists had painted their own interpretations of the image. It has influenced countless painters, poets, writers, and other artists since.

Böcklin’s Attack by Pirates (1886) is perhaps a more direct ‘Gothic’ Romantic work, showing a group of pirates attacking some Italianate buildings atop the sheer cliffs of a tiny island, which is connected by a viaduct. The attackers have already set light to the buildings, which casts an eerie red light against the black clouds. Perhaps the artist felt that he was coming under similar attack by his critics.

That year, Böcklin moved from Florence to Zürich in Switzerland, where he turned more to narrative and mythological works. Then in 1892, he moved for the last time, to San Domenico near Florence, where he remained until he died in early 1901.

The final landscape painting of Böcklin’s which I show here is The Chapel, from 1898. It returns to similar sea-swept ruins as those in Ruin by the Sea above, but with some important changes. Here there is no doubt that the waves are destroying the remains of this chapel, as they crash against its walls. The cypresses are still curved with the wind, but instead of black crows there are white doves, associated with peace. On the remains of the steps at the right are red flowers, which could have several associations, including love.

Although this still refers to decay and death, it is perhaps more optimistic with love and peace.