This article lists bugs which you and I have encountered in macOS Mojave 10.14.6 itself, rather than issues in specific third-party applications and other software.

The 10.14.6 update leaves many longstanding bugs in Mojave untouched. It does seem to bring improvements in File Sharing, and has changes in News, Notes and Photos (particularly in iCloud) which may fix other issues. The one bug which has been reported previously in this series which it does appear to address is confusion which could arise in Accent colours. Sadly, features such as Legacy Software and the resizing of APFS disk images remain completely broken. For the final release of Mojave, that’s deeply disappointing.

The .webloc files within that folder now can’t be copied or moved, nor can you open their data forks in an app such as BBEdit: they simply do nothing, or cause the app to hang. In the case of the Finder, you may be able to cancel the operation if you’re quick. The solution is to quit Safari, which then releases those weblocs for use.

Many thanks to Dimitris for discovering this seriously weird bug.

The information given about ‘legacy software’ in System Information remains incomplete and misleading. Fuller details are here. Use 32-bitCheck (from Downloads above) instead.

macOS seems to be building this list as and when macOS warns the user that each specific 32-bit app needs to be replaced. Those warnings now occur more frequently, but are still far from complete or comprehensive. Until their list is complete, users will find 32-bitCheck and ArchiChect far more reliable for informing them which apps and other software are 32-bit.

This bug appears to have been present since the release of APFS in High Sierra, and persists in 10.14.6. Using the Resize… command in the Images menu on a disk image in APFS format invariably fails immediately, with an error message.

The only way to resize an APFS disk image is using hdiutil at the command line. Further details including an account of the workaround are given here.

(Thanks to Dimitris for reporting this, and to klanomath for the workaround.)

For several years, sandboxed apps have written quarantine flags to most if not all documents they open, even when they don’t save them. These put all those documents in quarantine, even when a document has never been near the Internet and only created and edited locally. This even happens when a ‘real’ quarantine flag has already been attached to a document; in overwriting that, the sandbox strips its link to the quarantine database, preventing further information on that quarantine event from being retrieved.

This adversely interacts with a protective mechanism which prevents easy opening of documents which have been set to be opened using an app other than the default for that type, using the OpenWith extended attribute. The end result makes it unnecessarily difficult to open such documents.

Full details are given here.

When asked to provide a thumbnail or preview of some malformed documents, QuickLook hangs displaying the busy ‘spinner’ in place of the thumbnail or content of the preview.

To demonstrate this, take a copy of a text file, and replace its extension with ‘.jpg’. Select that file, and its thumbnail will be shown as the busy spinner. Press the Space bar and its preview will also be the same busy spinner. QuickLook appears unable to return an error to IconServices, or the preview window. This appears to affect mainly malformed image files, including JPEG, TIFF and PNG. It doesn’t appear to affect QuickTime movies, though, suggesting that the bug is in the qlgenerator for still image formats, which is part of macOS.

Although this doesn’t result in high CPU load, and doesn’t hang the Finder or anything else, it is a fundamental flaw which should never have appeared in release software.

Open the Keyboard pane, select the Shortcuts tab, then the App Shortcuts item at the left. If you only have the single default shortcut, add some others. After adding two or more, they will be displayed with the ellipsis character … instead of their menu title, and attempts to edit that title are frustrated because the edit area is the size of the ellipsis, not the title. There is no apparent way in which this can be corrected by the user. 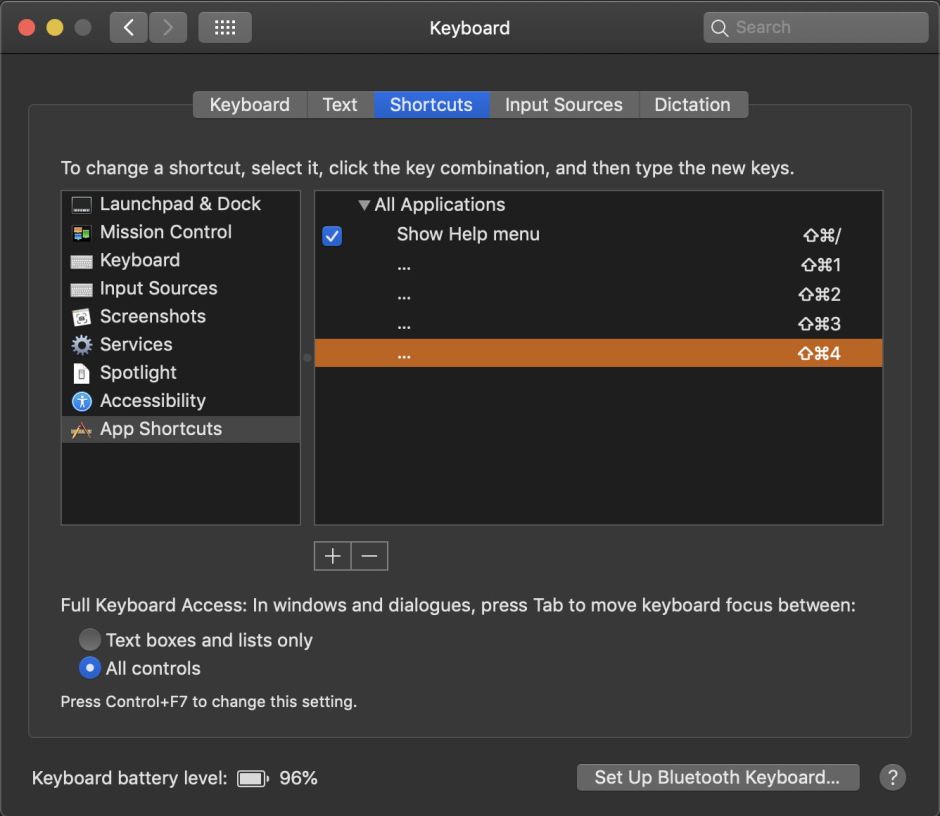 There are odd inconsistencies here too: the single default item Show Help menu has a checkbox at the left, but items added by the user don’t. However, as that first item cannot be edited or removed, that checkbox is the only way to disable it.

This tab is almost unusable as a result, making it impossible to set or maintain app shortcuts. macOS 10.14.4 altered this, in showing one additional letter each side of the ellipsis, but still doesn’t handle this properly in 10.14.5 or 10.14.6.

(Thanks to John for pointing this out to me.) 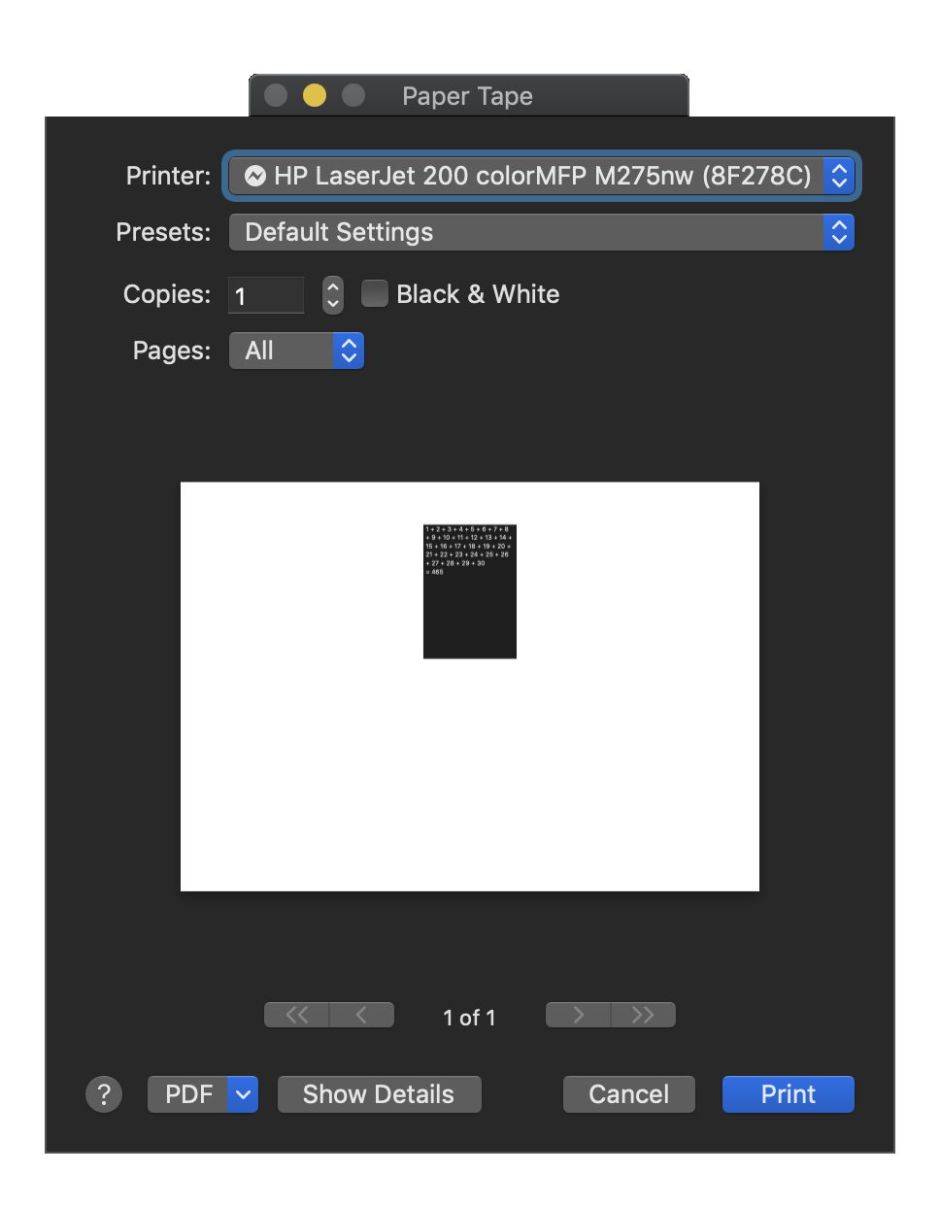 The only workaround for the first bug is to switch to Light Mode before printing; there is no workaround to the second, other than copying and pasting the Paper Tape output to another app for printing.

It’s perhaps worth noting here (and in the bug below) that Apple has started rejecting third-party apps from the App Store when they don’t print correctly in Dark Mode. Maybe it should put macOS in order before behaving like this to developers?

Printing from Activity Monitor when in Dark Mode results in almost completely blank pages, which contain just a few icons. 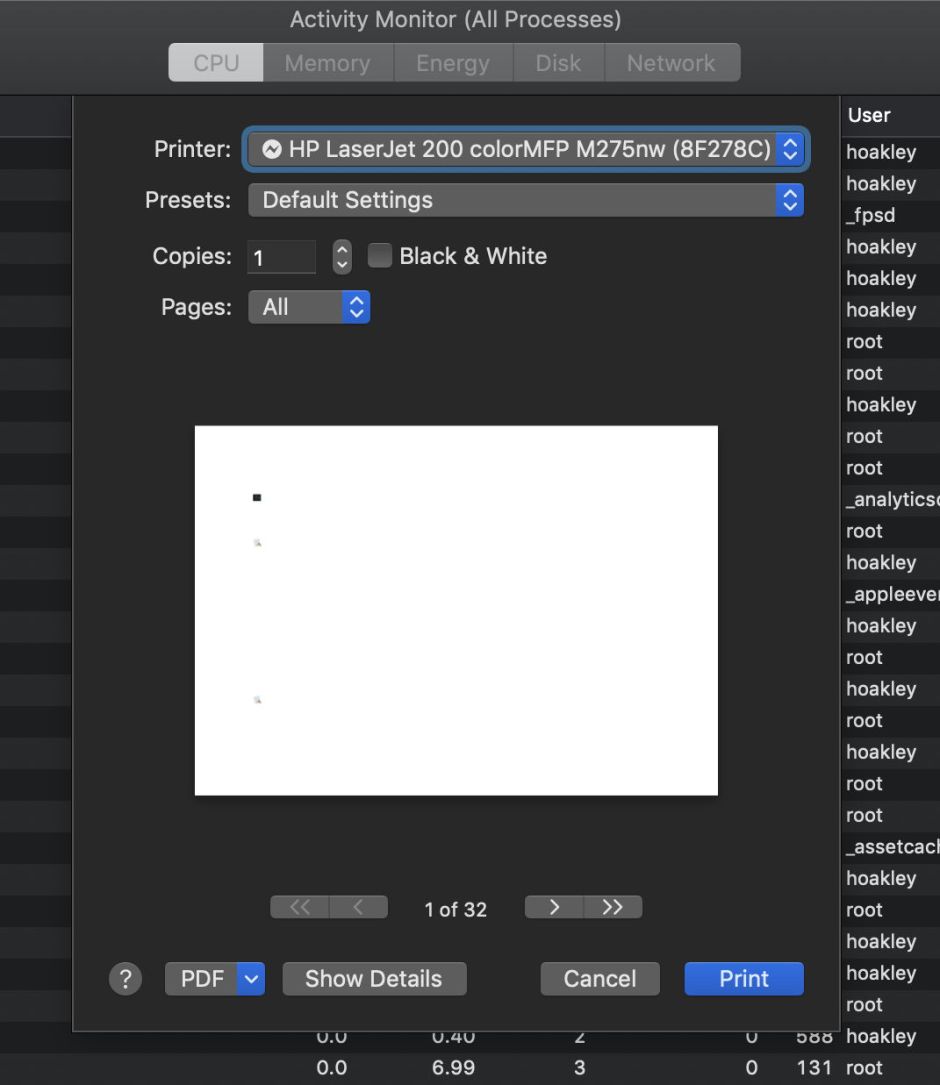 The only workaround is to switch to Light Mode to print.

Correct app behaviour when the user changes the selection Highlight colour in the General pane, either directly or by changing Accent colour, is to change existing selections when the app window is brought to the front or otherwise updated. Preview doesn’t do this: select some text in a PDF document, for example, then change the Highlight colour in the General pane. The selected text will remain in its existing colour highlight.

In addition, the Graphite highlight colour doesn’t work at all in Dark Mode, and may not work reliably in Light Mode either.

Apps which are built on AppKit do behave correctly, though: to see how this should work, try it with, for example, my DelightEd.

(Thanks to Dimitris for explaining this to me so patiently.)

When you enter some search terms into the App Store app, completely unrelated apps appear in the results. In some cases, these are additional to genuine hits, in others they just appear weird and unrelated. For example, searching on the word consommé (a type of soup) consistently returns an app which has nothing whatsoever to do with the word, nor does it appear in the info provided about the app. 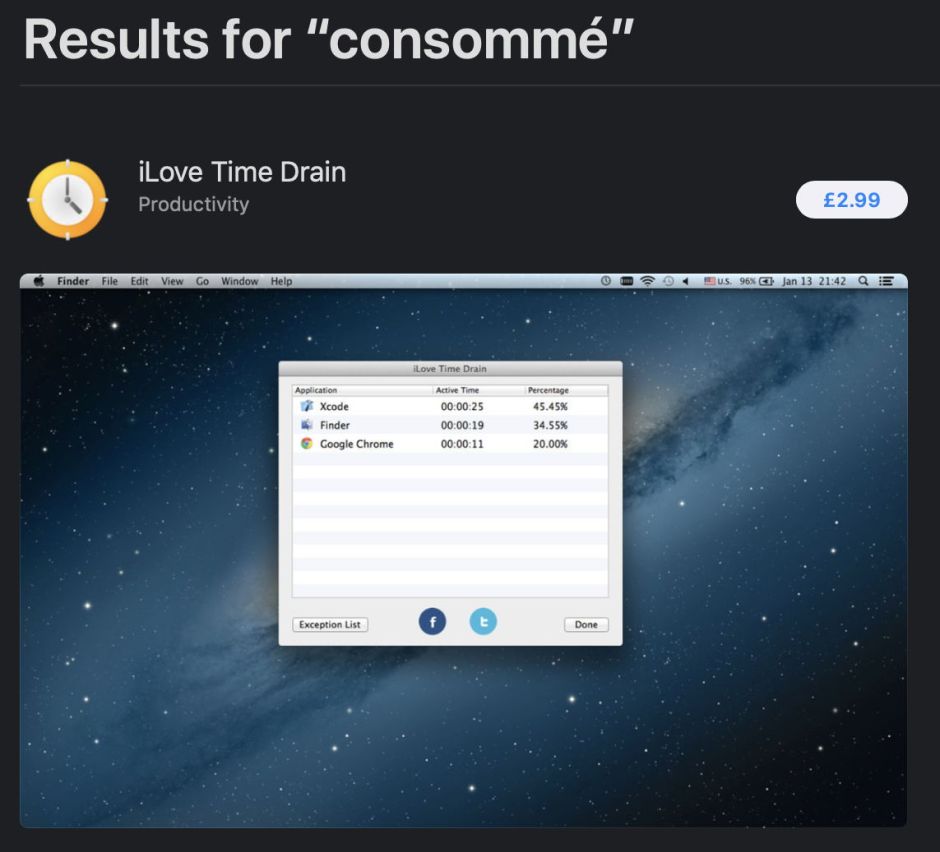 clover returns three genuine hits, and three spurious apps which are completely unrelated. This looks like the store’s metadata are corrupted with random terms.

Colours used to display text are changed when Dark Background is enabled. If you save or copy Rich Text in that display mode, the colours saved or copied are very likely to differ from those shown. To avoid this, don’t use Dark Background when you’re using colour.

This and other problems are discussed in detail here.

Dark Mode – QuickLook and other bugs

If you use an editor such as my DelightEd which is designed to produce RTF which ‘works’ in Dark as well as Light Mode, then QuickLook thumbnails and previews switch contained text to white in Dark Mode, but retain a white background. This renders the thumbnail/preview useless in Dark Mode.

A similar problem with Dark Mode exists when you use Control-Command-D to show the definition of a selected word: the popover window is semi-transparent, which makes text in custom dictionaries visible only when viewed over a window with a white background. If the underlying window is dark grey, then that text is almost invisible.

These are described in more detail here. There don’t appear to be any workarounds for these, other than switching back to Light Mode.

Thanks to Artyom for drawing my attention to the second of these.

If you set Safari 12.1.2 to open a local file as its Home page, this may cause an error when Safari first opens, and that error may in turn result in another error reporting that the error page can’t be found. Others also report Safari’s inability to search until a remote page has been loaded, and other potentially related issues. These are detailed here (see the comments there in particular).

Once Safari has started up and connected to a remote page, these problems usually vanish, so can be safely ignored. They also appear to occur most commonly when the Develop menu is enabled; turning that off may make them disappear, but you then lose the additional features of that menu. This bug was present in 12.0 and persists in 12.1, 12.1.1 and 12.1.2.

(Thanks to Manoli for pointing this out.)

This long-standing but intermittent bug dates back to Mavericks if not earlier, and I have whinged about it here and here. It was also present in every version of El Capitan, Sierra and High Sierra. The only workaround is to select a different folder, then to select the correct folder again.

General pane Accent colour confusion appears to have been fixed at last: switching between accents seems more robust and consistent.