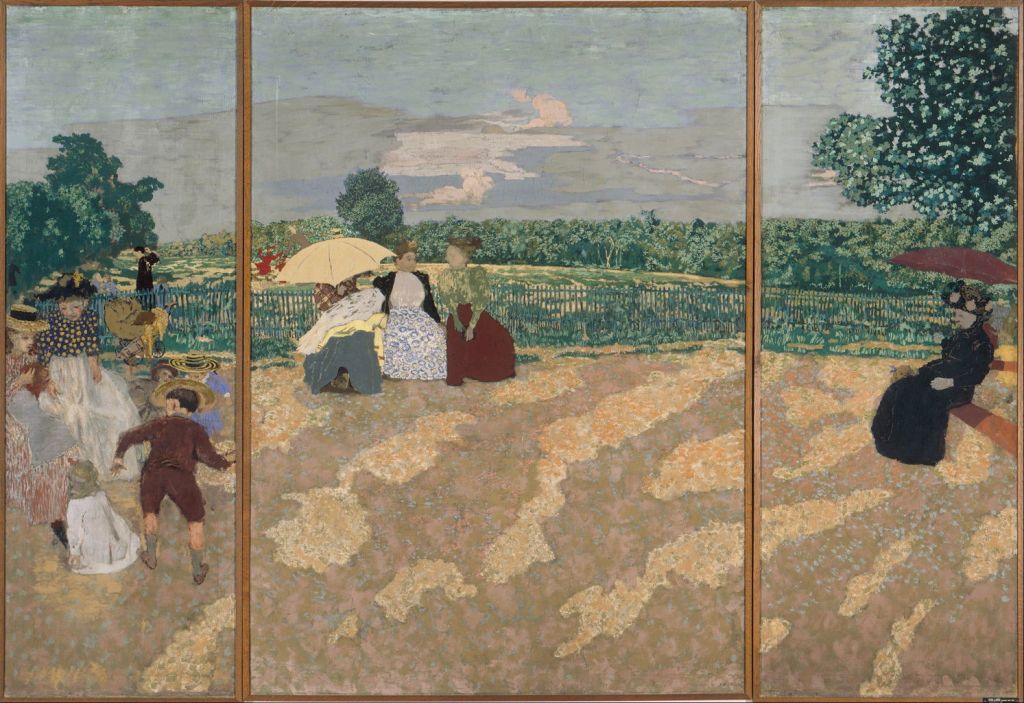 Following my earlier long series on the paintings of Pierre Bonnard, and a brief look at those of Ker-Xavier Roussel, I seem to have accidentally started to look at the Nabis. Continuing this trend, this article and the next provide a short account of Édouard Vuillard (1868–1940), known to the group as Le Nabi Zouave.

Vuillard was born in 1868, in the town of Cuiseaux in eastern France, close to the border with Switzerland. His father was a retired Captain in the Army, which may have partly inspired his nickname. The Zouaves were crack infantry regiments first raised in North Africa, and before choosing to be an artist, Vuillard turned down a military career.

When he was ten years old, Vuillard and his family moved to Paris, and his father died six years later. His education was then funded by scholarship to the Lycée Condorcet, where he made friends with Ker-Xavier Roussel and Maurice Denis. The following year, he moved on with Roussel to the studio of Diogène Maillart, and from 1886-88 he studied at the Académie Julian under Tony Robert-Fleury. Two years later, Vuillard met Pierre Bonnard and Paul Sérusier, who also joined the Nabis.

Vuillard’s early post-Impressionist style is shown in this still life of a Cup and Mandarin from his student days in 1887-88.

Vuillard in a White Collar from 1888 appears to be his earliest surviving self-portrait. He joined the Nabis by 1890, and later shared studios with Pierre Bonnard and Maurice Denis.

His changing style is seen well in this Self-Portrait in a Bamboo Mirror painted in about 1890, in what appears to be an attic room.

In 1891, Vuillard exhibited for the first time at the Salon des Indépendants in Paris. Together with Bonnard, Roussel and others, he met and befriended brothers Alexandre and Thadée Natanson, who founded and published the art journal La Revue Blanche, for which Vuillard provided graphics. During this time, he developed his printmaking skills, and throughout the rest of his career was an avid maker of prints.

Child Wearing a Red Scarf from about 1891 is one of his earliest truly Nabi paintings, with its flattened perspective and emphasis on patterning, particularly in clothing, although at this stage his colours weren’t muted.

In Bed, also from 1891, shows the simplification which transferred to his prints.

From 1892, together with other Nabis, Vuillard was commissioned to decorate private residences. The last such work was commissioned the year before his death, when he painted part of the Palais des Nations in Geneva with Maurice Denis, Ker-Xavier Roussel and Roger Chastel.

He was also heavily involved with the new Théâtre de l’Œuvre in Paris, for which he designed stage sets and programmes.

Vuillard lived with his mother until he was sixty. She was a dressmaker, and themes of dressmaking and fibre craft are frequent in his paintings, such as his Two Seamstresses in the Workroom from 1893. This relies on the textures generated by patterning to impart form, making it difficult for many to distinguish the two women from one another, or from their work, particularly as their faces are overlaid.

Far more successful is his large triptych Public Gardens from 1894, one of the masterpieces of the Nabi era.

Under the Trees from The Public Garden from the same year appears to be another panel from a similar series or polyptych which is one of his most eloquent expressions in patterning.

Another famous example of his Nabi style is Woman in a Striped Dress from 1895 with its rich red earth background.

Vuillard was also accomplished using other media, in the case of this Evening Effect from about 1895, working in pastel. This appears to have been influenced by photography, in the way that the figure in the foreground is blurred and ghostly, as they would be when photographed at night with a long exposure.

Vuillard recorded others in his social circle. In Vallotton at the Natansons, he shows Thadée Natanson’s wife Misia watching Félix Vallotton painting in 1897, at the Natanson’s home. Misia was a muse to several artists at the time, but in 1903 started an affair with the wealthy industrialist Alfred Edwards, whom she married in 1905.

In 1898, Vuillard visited Venice and Florence, and the following year went to London.

It was perhaps his travel by train which prompted Vuillard to paint The First Class Compartment in about 1898-1900. In this, he used Degas’ peinture à l’essence, in which most of the binder drying oil is removed from the paint before it is applied. Unfortunately this usually results in poor paint adhesion and a fragile paint layer, which defeats the purpose of using oil paint in the first place.

Around the turn of the century, Vuillard’s painting style started to change again. Although the Pot of Flowers (1900) above is still very Nabi, Winter (below) from about the same year is a very loosely-sketched work which follows on more closely from his earliest paintings.

By this time, the Nabis as a group had effectively dissolved, leaving Vuillard still in close friendship and collaboration with Bonnard, Roussel, Denis and others. In the next article I will show where this change took him.