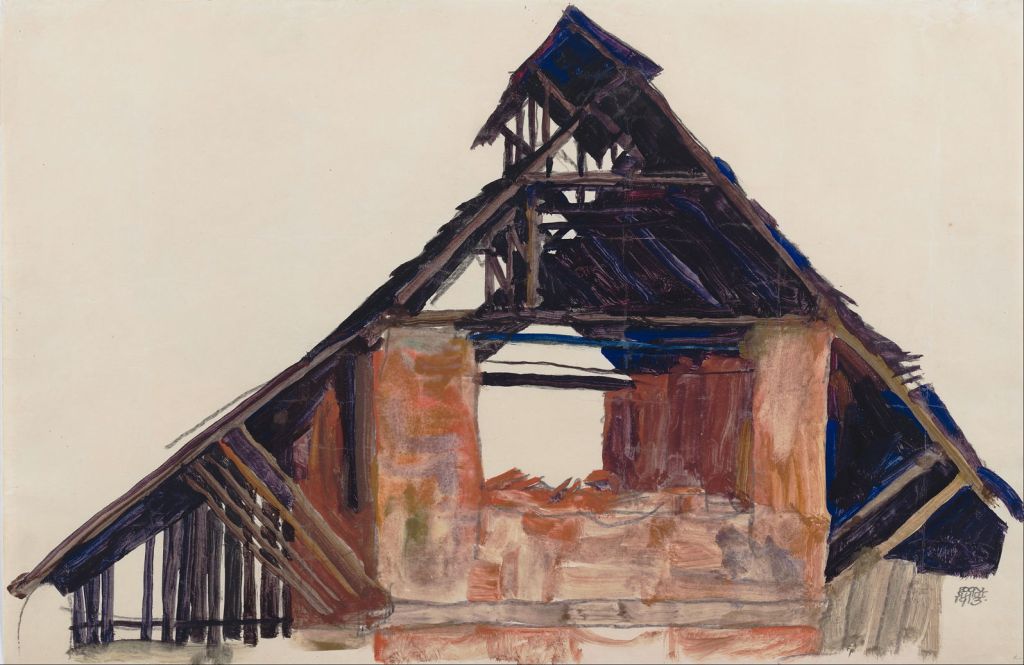 At the start of 1912, Egon Schiele was living with his model Wally Neuzil in the town of Neulengbach, to the west of Vienna. Even there, his lifestyle attracted attention, and local kids started hanging about his studio. In April, this led to an allegation that he had seduced a girl who was under the age of consent, and he was arrested and held in custody during the investigation.

Artistically, though, the year was far more promising. His work was selected for the Secession’s spring exhibition, a Munich dealer showed other works alongside those of Der Blaue Reiter group, and he sold some too. Following his release from prison, Schiele visited Trieste, where he painted boats in its harbour.

He exhibited more paintings later in the year, and travelled to Munich and Lindau. He stayed for longer in Bregenz, from where he visited Zurich. In November he moved to a new studio in Vienna, which was to remain his base until his death. His friendship with Gustav Klimt brought him a new patron, and Schiele’s income continued to increase healthily.

The year 1912 was also a time in which Schiele experimented most with his motifs, producing paintings which have since been claimed to be largely abstract.

Autumn Tree in Stirred Air (Winter Tree) (1912) is often seen as one of his most abstract paintings, but remains firmly representational. It shows a bent and twisted tree, barren of leaves, against unusual cloud formations known locally as ‘snow lights’ because they are taken as indicating imminent snowfall.

Autumn Sun and Trees (1912) uses a similar motif, this time looking contre-jour into the low sun of the late autumn, with most of the leaves still on the two trees shown.

Among his figurative work from 1912, this portrait of a Mourning Woman stands out for the profound sadness in her eyes.

Records show that this scandalous painting of a Cardinal and Nun (Caress) (1912) was exhibited at the Secession’s spring show. It bears strong influence of Klimt, and the couple appear to be kneeling, with their lower legs bared and their arms intertwined.

Drawn in graphite with gouache applied for colours, Schiele’s Standing Woman in a Patterned Blouse (1912) employs decorative patterns on the blouse which are again reminiscent of Klimt’s major full-length portraits. Schiele’s novel touches are the bare thighs and buttocks.

His Self-Portrait with Lowered Head from 1912 is one of his most disturbing. He is dressed in a plain white gown, and holds out his right hand to form scissors with his index and middle fingers. He looks positively menacing.

The following year (1913) saw Schiele travelling extensively and painting even more landscapes. He visited the town of Stein an der Donau (on the Danube), the Traunsee, and Lake Ossiach, from which he made several successful paintings. He became an invited member of the League of Austrian Artists, and exhibited in several major shows, including the Great German Art Exhibition in Düsseldorf, Germany.

In the summer of 1912, Schiele had found it difficult to make any progress with his painting. The following winter, he painted The Small Town II (View from Bohemian Krumau) (1912-13), which shows part of the left bank of the Moldau in Krumau. Related views of this town feature in several of his other paintings of this period.

Schiele employs a flattened projection just as Klimt did in many of his townscapes. In Klimt’s case, it was seemingly inevitable, as he painted his views looking through a telescope from the opposite bank of a substantial lake. In Schiele’s paintings, the water is in fact the relatively narrow river Moldau, and he had no need of a telescope. There was thus no optical reason for this flattened projection.

This town is now known as Český Krumlov in the Czech Republic.

Setting Sun (1913) is a thoroughly autumnal view of the coast near to Trieste, which he is known to have visited in 1912, although the artist’s letters indicate that this work may not have been painted until spring of 1914. It appears to be a composite view in any case: the two outlying islands are lit with the same colour as the sky, although they face away from the setting sun. The foreground is dark, although lit by the sun, with bright star-like yellow flowers.

Widely accepted as one of Schiele’s finest depictions of a building, he painted Old Gable (1913) when he was visiting Carinthia in southern Austria. He also made a preliminary pencil sketch of this barn.

Stein on the Danube II (1913) is another flattened view, this time of the town of Stein an der Donau – Stein on the Danube, in north-eastern Austria. It shows the distinctive towers of the former Frauenberg Church and the Parish Church of Saint Nicholas.

In December 1912, Schiele and Wally stayed with a patron in Györ, in north-west Hungary. There he discovered a bridge which today might remind us of the paintings of Vincent van Gogh, perhaps. Schiele wrote that he felt it looked “quite Asiatic, as if Chinese”, and made a series of sketches of it. He developed these into The Bridge the following year.

From his figurative works of 1913, I have chosen this unusual painting of Devotion, which presumably refers to to an older couple. Schiele doesn’t give us any clues as to their genders.