Dark Mode may be Mojave’s most visible change, and still its headline feature, but it has proved far more complex than you might have suspected.

If you work mainly with images, and editors which already run in their own local Dark Mode, you’ve probably turned Dark Mode on and haven’t looked back. But even ardent nocturnal software developers, such as those parodied in Apple’s introductory movie for the WWDC 2018 Keynote, must be wondering whether it’s as good as they thought.

Biggest problems arise when rendering text-based documents, such as HTML, RTF, and PDF, which are almost entirely designed to be displayed in black text on a paper-white background. Apple has wisely stood fast with that convention almost everywhere: even TextEdit opens with a white editing area, Safari displays pages exactly the same in both modes, and so on.

There are some anomalies, but they are mostly minor. Most Help books remain in Light Mode, as they too are text rendered in formats which assume black on white. In Xcode 10, this leads to the odd situation where Apple’s developer documentation switches to Dark Mode rather well, but regular Help pages stay in black on white, although most developers who work in Dark Mode will see the latter relatively seldom.

The one app which has become a bit of a mess is Dictionary. Because its content can be drawn from several different types of source, Apple has tried to make this more uniform: its rendering of Wikipedia pages has been carefully translated into Dark Mode. And it works rather well too.

It all starts to come unstuck, though, when you use a third-party dictionary. In this case, it is rendered black on white, which is glaring but usable; I have seen one case where a user-added dictionary is shown in black on dark grey, which is disastrous.

Select the All option in Dictionary, and you can end up with a messy mixture of HTML ported to white on black, with sections that stick out as they are shown still in black on white.

Then we come to Emoji, which are outside Apple’s control. For the vast majority of Unicode characters, apps and macOS can change the colour in which they are rendered. Emoji come with their colours baked in, so unless someone is prepared to add a whole new suite of Dark Mode Emoji, what you can see clearly in Light Mode 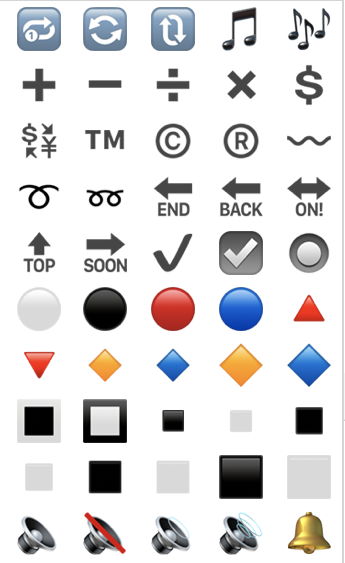 isn’t what you are prepared for in Dark Mode, perhaps.

The earliest PCs with their CRT displays were locked in permanent Dark Mode. When the Mac and others came along with their novel white displays (still CRT, of course), it took more than a few weeks for everything to adjust and to make the best of the change. Over the coming months, I expect that some of these anomalies will settle, and Dictionary will become less conflicted.

By then, Dark Mode will have become less of a novelty, and more of a good working option for a minority of users.