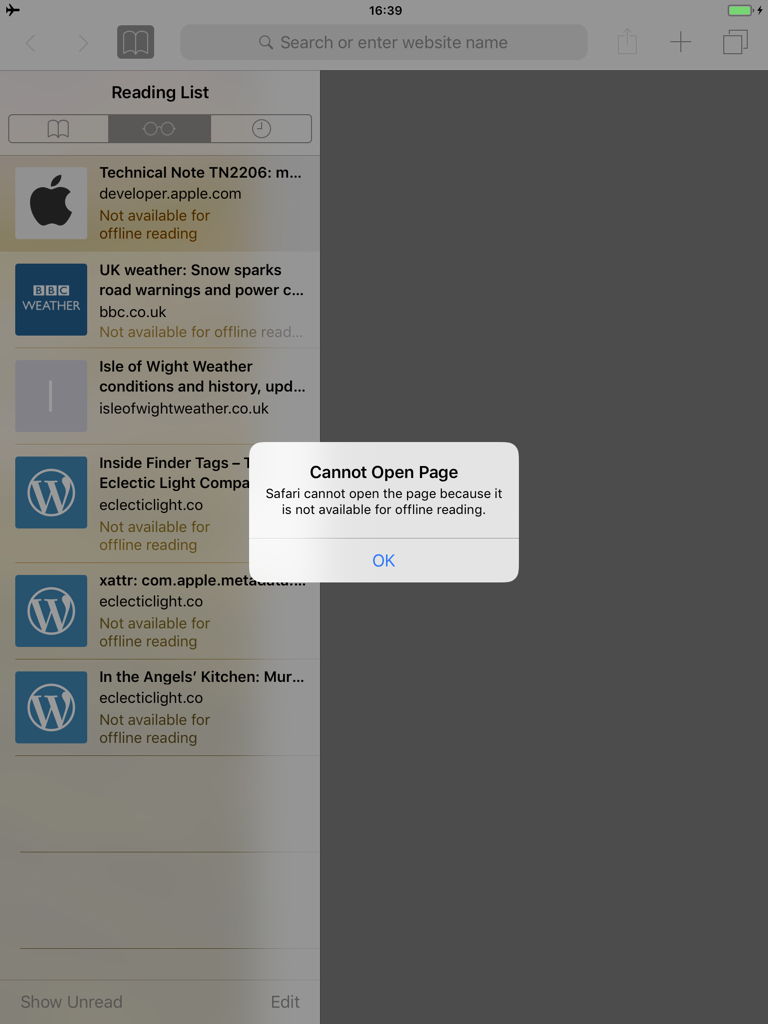 When you’re going to be away from an internet connection for a while, Safari’s offline reader mode can be a valuable tool if you can spend a few moments setting it up.

While you still have a good internet connection, open Safari’s Preferences (or, in iOS, tap on Safari in Settings), and go to the Advanced tool. Select (tick) the fourth checkbox down, to Save articles for offline reading automatically. Then visit each of the web pages which you want to keep accessible, and once they have loaded, add them to your reading list using that command in the Bookmarks menu.

Once you turn Airplane Mode on, or your Wi-Fi connection off, and board your plane or whatever, you can then access those saved pages in your reading list, even though your Mac or iOS device doesn’t have an internet connection.

The way this seems to work is that, when the feature is enabled, Safari saves each webpage in your reading list in a small cache. When your Mac can’t fetch those pages directly, it displays what it has in that page’s cache. As so many pages now depend on additional files, Safari has to go a little deeper than just saving the one page.

The skill in implementing this feature is working out how deep to go when following links on a page, and which types of link to follow. Simple embedded images, for example, are essential, or the saved page will be useless. Certain types of content, such as dynamic data from a weather station display or webcam, are also likely to get omitted, and most users will understand why.

Only Safari is getting progressively worse at making these decisions, to the point where the version running in iOS 11.2.1 is almost useless as an offline reader. Even the two most widely-used versions of Safari 11.0.2 for macOS differ in their usefulness.

When the High Sierra version fails to load content for a page in its offline reader, the error message it gives is inappropriate too. Informing the user that Reading List articles are available for viewing while you are offline only rubs salt into the wound: that is exactly what the user expected Safari to do, but it is the app which has failed to come up to expectations, not the user.

The iOS version is disarmingly honest about its failures, and doesn’t even attempt to offer most pages saved for offline reading. Instead, it just lists them and informs you that they’re not available for offline reading, although Sierra’s Safari handles them without so much as a faint sigh.

All three versions of Safari were released at around the same time: the macOS versions on 6 December, and iOS 11.2.1 on 13 December 2017. iOS devices are far more likely to be used offline, and macOS is most likely to be used offline when running on MacBook/Air/Pro models. So logically, you might expect the iOS implementation to work better than macOS ones, and High Sierra better than Sierra, given Apple’s most recent emphasis on and success in marketing laptop Macs.

There don’t appear to be any user controls over the depth to which offline reader versions are cached. But, for the moment at least, those systems which are likely to use it most are also those in which it works most poorly. To the point where, on any iOS device, offline reading is temporarily offline.

(Thanks to Russell for asking me why this doesn’t work as it should.)