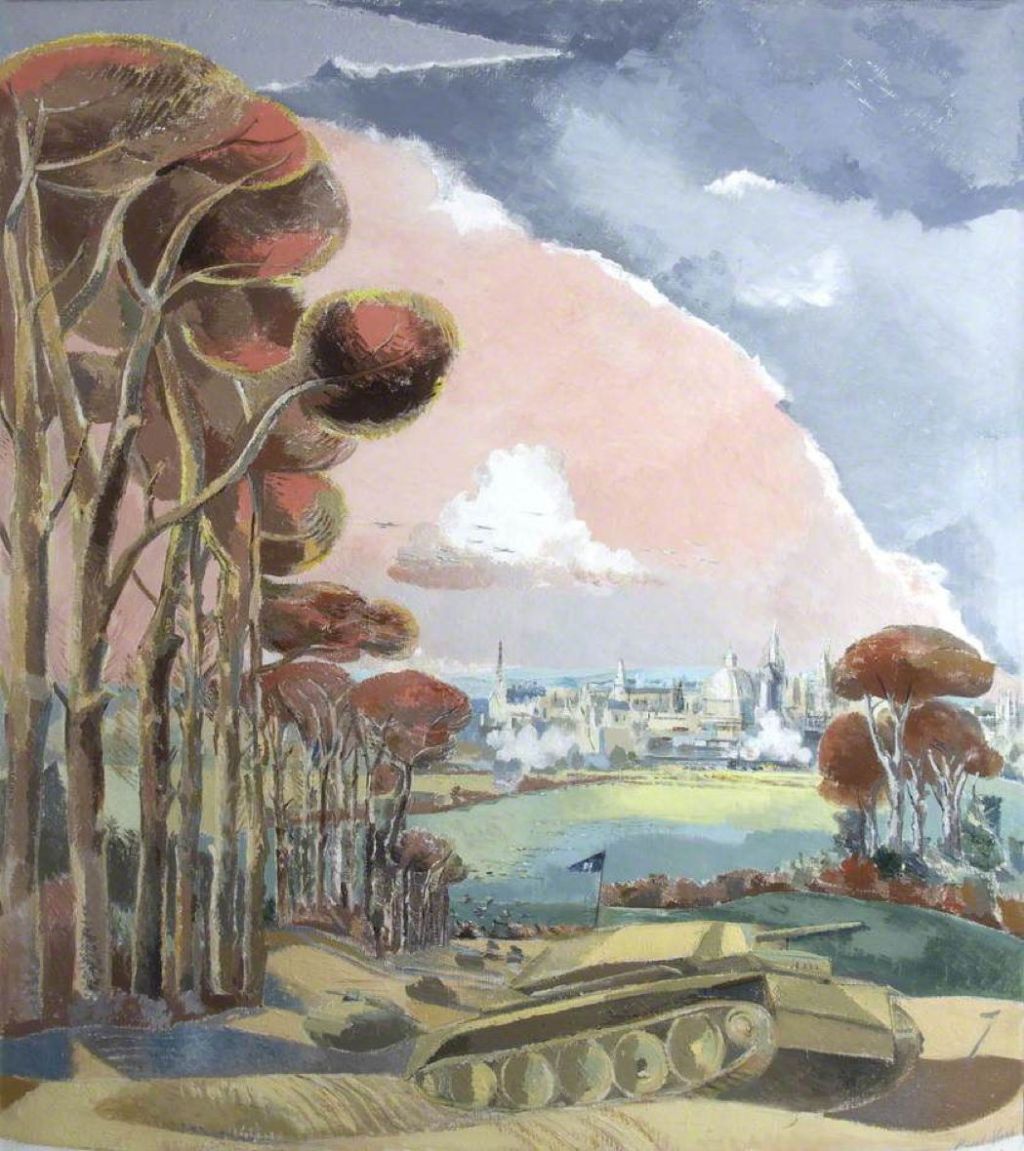 Shortly before the Second World War began in 1939, while Paul Nash was at the height of his surrealism, the Nashes moved from London to Oxford. He was then appointed to a full-time war artist post for the Royal Air Force, which had hoped that he would spend his time painting portraits of aircrew. Nash had other ideas, though.

London: Winter Scene, No. 2 is one of several views which Nash painted early in 1940, of snowy conditions seen from his room in the Cumberland Hotel, near Marble Arch, London.

Nash quickly developed a fascination for the wreckage of aircraft which had crashed. Bomber in the Corn (1940) is one of six paintings known as the ‘Raiders’ series, which he started in the summer of 1940. These developed his initial idea of the aircraft being monsters which had left their natural element of the air. Each of the wrecks took on an individual personality, which Nash’s watercolours explored, using surrealist techniques such as the juxtaposition of the incongruous and improbable.

In his Totes Meer (German for Dead Sea) (1940-41), Nash transformed the sight of a dump of wrecked aircraft at Cowley, near Oxford, into a vision of the Dead Sea with waves created by a storm, but frozen at an instant in time. Working mainly from photographs which he took during a visit to the dump, he created one of the most original images of this phase of the war.

He explained: “The thing looked to me suddenly, like a great inundating sea … the breakers rearing up and crashing on the plain. And then, no: nothing moves, it is not water or even ice, it is something static and dead.”

From the end of June 1940 for four months, the German Luftwaffe (Air Force) and the British Royal Air Force fought a succession of intense air battles over the UK, mainly the south and east coastal areas. The startling distant view in Nash’s Battle of Britain (1941) incorporates many elements of air warfare, including vapour trails (contrails), smoke marking the spin and crash of a downed aircraft, formation flight, and defensive airships. Below this action are the low hills, estuary, and a winding river typical of much of the English south coast.

By emphasising the forms and patterns made in the sky, as seen from high above the ground, Nash increases the distance from this air war, detaching the story of the battle from the people involved.

By the end of 1940, the RAF had become sufficiently displeased with Nash’s paintings for them that his contract was terminated. Early the following year, a compromise was reached in which his paintings would be purchased as he made them. But the artist’s health was deteriorating, and he suffered a period of creative block. He submitted several collages which he thought might be used in propaganda, but they did not do so.

Nash appears to have started work on his Pillar and Moon in 1932, but did not complete it until well into the war, probably in 1942. Using an idealised landscape, he draws comparison between two spheres, perhaps using them again as symbolic references to the soul. That on top of the stone column is solid, close, and tangible, while its counterpart the moon is far distant and intangible.

The artist wrote that this was a “mystical association of two objects which inhabit different elements and have no apparent relation in life”. His use of the geometrical projection of the long row of trees gives the painting great depth, which combines with its nocturnal hues and lifelessness to produce an effect of sombre eeriness.

Using another aerial location, Nash’s Defence of Albion (1942) shows a Sunderland ‘flying boat’ operating in rough seas off the Portland, Dorset, coast; cues for the location are given by the large blocks of limestone from the quarries in the distance. Among the duties of these aircraft were anti-submarine patrols, and part of a German U-boat is shown in the right foreground to emphasise this (in an unreal composite).

Once again Nash distances the viewer from any human elements by concentrating on the machinery of war. He experienced great difficulties in completing this painting due to his worsening asthma. He had originally hoped to travel to the coast to take photographs and make sketches, but was unable to do so. From 1942, Nash spent periods convalescing with the artist Hilda Harrison in Boar’s Hill, overlooking Oxford from the south west.

Oxford During the War (1942) is a quietly apocalyptic vision from the fields at Boar’s Hill, looking towards the dreaming spires of the university city of Oxford. In the foreground, tanks are being driven up the hill, one bearing a pennant which may refer to the local golf course. On the other side of the meadows surrounding the city are two large clouds of white smoke which indicate the impact of aerial bombing.

In the sky above the spires, to the left, marked out clearly against the white cumulus cloud, are some bomber aircraft. The foliage is autumnal, and the sky a military grey, and light pink.

From Hilda Harrison’s house on Boar’s Hill, Nash could also see a landscape which he had first painted when he was young: this inspired his last series of paintings, some of which are his most brilliant.