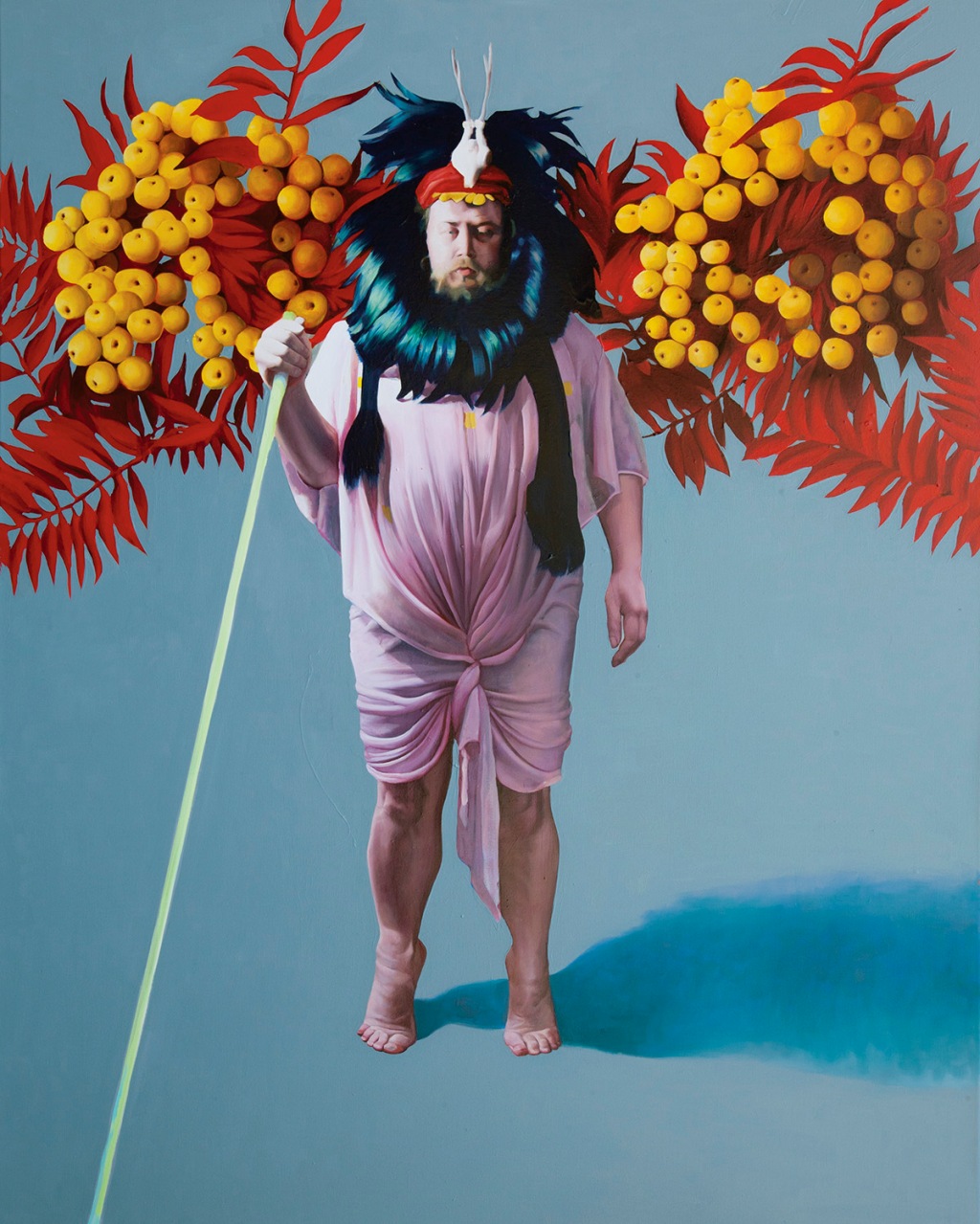 I am delighted to welcome Kirsty Whiten, a young, accomplished and highly innovative artist, who explains her forthcoming book Wronger Rites – The Quing of the Now People, which is currently a Kickstarter project. She has generously provided images of three of the paintings from that book.

These three paintings come from a series of rituals which I fabricated and played with, collaborating with my models during photo sessions to create costumes, scenarios, poses and narratives. I think of each ritual we constructed as a sort of balm for identity crises and particular modern miseries.

Flatfoot fronting comes out of an idea of women accepting and flaunting something animal, assertive and grounding about their femaleness. No shoes, no heels to make their butts pert. Animal masks to lend the character of the hyena or the eagle. I am really interested in a little gargoyle called the Sheela Na Gig, which is found above doors in churches all round Europe, but mostly in Ireland. It is holding open an exaggerated vagina and grinning, and I used that challenge for one of the dancers in the painting.

The rite of Peacockery is for the flamboyant gentleman. They do wear the heels, and colourful phalluses, and it’s their turn to be in the beam of a sexually hungry gaze. The image comes from the idea that this would be deeply liberating for men, and equalising for a society. I found that as I went on and painted more and more figures engaged in these dances, that there was a special satisfaction in finding the right mask for the energy and position of the body.

The Quing of the Now People is the high priestess who oversees all of the rituals. A genderqueer character with a full beard and beautiful, gracious ankles, she/he is meant to be accepting of all sorts of people and their bodies. The foliage is Sorbus, or Rowan, which has been used to ward off evil spirits and planted often outside newly built homes as protection.

These paintings meld so-called primitive culture with Western, the ache of the atheist for a bit of magic and meaning, and marking life stages. The characters are clearly contemporary but behavioural customs have broken down for them; are they castaway, or living in some post-boundary future? They inhabit a place and time removed. Secular society denies of us a shared belief in a universal narrative, and many of us miss out on performing rituals that mark our life stages or handling objects that contain power and wisdom.

Wronger Rites began as a drive to imagine sacred actions for the Now Peoples, to see what might be missed.

Phearce Perturbation
– or –
the body that seeks to join
– or –
Peacockery

The men are known to need a dose of gaze.
Those who seek to inhabit this beam, or to quest for a joining body,
display in the rite of Peacockery.
The process of preparation and preening can last for many days
and causes much ululation and tearing of head hair,
as the rite is highly competitive.

The rite is a process of walking the hot coals of vanity.

A few are chosen from the display as mates
but often simply met, sexually, on that night.
oftentimes parts of the display turn in on themselves
and satisfy each other’s intense desire to be ‘seen’ and adored.

Some require no joining but to the balm of crowd-eye.

Flatfoot Fronting
– or –
The Body that Chooses

A private nightaway from the men,
a fierce celebration,
a safe discharging of negative emotion
for those whose feet have trodden
bare and flat
from girlhood.

Not a great deal is known about the process, though it seems to be
a sort of taking stock in life. The flatfoots say
they take
the hyena’s ‘bite’ or ‘headgear’
(translation is unclear)
it isn’t safe exactly.

The dance is long, and many softfoots think it ugly
and dirty
(the floor is beaten earth)
though reports are extremely scarce
because the flatfoots are fierce about their privacy in this regard.

The Quing – Sorbus Warden Ritual
-or-
The Body that Changes

All bodies are changing bodies.

His and her robes are said to represent
every vulva, every anus,
every puckered wound or scar of the Now Peoples.

His and her fruiting ‘Sorbus’ or Rowan fruits
are used to ward off malign attitude, and dysmorphia.
Anointing with warm oil, the Now Peoples work to forgive
the betrayals of the meatsack, or sacred lump,
and commit to ‘driving’ (steering or riding?) the body onwards
with deep care and respect.

It is curiously clear that there is no sense at all of
‘male’ or ‘female’
at this time
and Now Peoples try to both
accept
and step into
their most direct self
by way of the gut and of kindness.

Kirsty is publishing a book containing images of the whole of this series of paintings. It is currently open as a project on Kickstarter and has already far exceeded its target. If you want to obtain a copy of her book, then that is currently the only way to do so.

She also has an extensive gallery and further information about her art on her website.