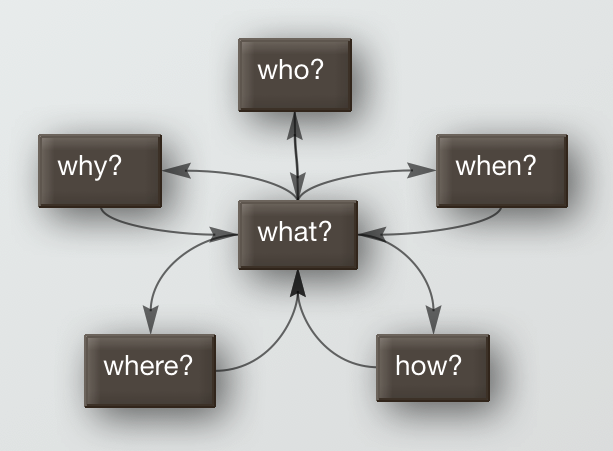 As my explorations of Storyspace 3 have indicated, I am particularly interested in using its hypertext tools for non-fiction writing. Having spent much of the last forty or so years writing a wide variety of non-fiction – from medical reports on patients, to scientific papers, a thesis, and millions of words about computers and their problems – this is a subject very dear to my mind.

So far, I have encountered little analysis of the structure of non-fiction writing, either historically or using the broader capabilities of hypertext. I am sure that I have missed some excellent work, and that you will point me towards it.

Most of the accessible material on the structure of non-fiction writing appears narrowly pedagogic, following a curriculum which considers just five basic structures. I will walk through those with the aid of screenshots from Storyspace 3.

This is, in text, a simple sequence of detailing the what, who, when, and other properties of something, and normally illustrated in terms of a network diagram. This can exist at an atomic level, for example in each entry in an encyclopaedia, or at a much higher level, where a whole volume could be devoted to examining what something is. Indeed, many non-fiction works get no further than debating the what.

Two subtypes are usually given for this, the chronology in which a chunk of history is delivered in time order, and a step-by-step account of a sequence of events or actions, such as in instructions. In simple linear terms, both are a straight linked sequence, although that should be considered to be a common sub-set of directed trees. The latter are more common and elaborate in advanced instructions, such as how to perform a particular surgical or maintenance procedure. 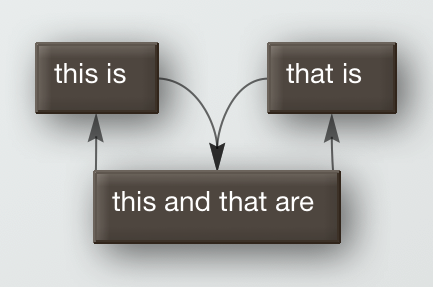 In this, two (or more) things are described in terms of their similarities and differences. This is normally illustrated as a Venn diagram of two overlapping sets.

Here an event or phenomenon is detailed, then an account is given of its reason or explanation. This is normally shown as a simple sequence of two items, but in reality should be generalised to a directed tree, for the more sophisticated. 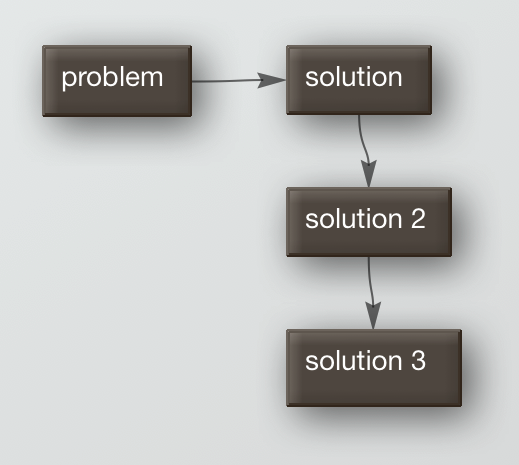 This is similar to cause and effect, only this time the starting point is the statement of a problem, and it is followed by an account of one or more solutions. If you are familiar with the rest of this website, you will see several hundred instances of this, in the form of questions and answers from my section in the former MacUser magazine.

Although these may be the most common structures in general non-fiction, there are others which predominate in certain spheres. Most obvious, perhaps, is the formal structure of most scientific papers, which runs something like question, method, results, interpretation, resolution. Other disciplines have their own structures of convention.

Perhaps the greatest weakness of this approach is that it does not consider how readers access non-fiction content, only how it is presented to them. Unlike narrative, which is intended to draw the reader along a particular path (which may of course involve choice or randomness, at least in hypertext), much non-fiction allows the reader to choose their own course through the text.

Didactic and pedagogic works (or works being used in those applications) may be intended to impose a reading sequence. There have been more or less experimental ‘programmed texts’ in which each section terminates with a test or other system of determining which section is to be read next. A less formal method which remains widespread is the end-of-chapter summary and exercises, which are designed to lead on to the next chapter.

However a more general readership may not read the work in strict sequence. Even scientific papers may now vary the order in which sections are presented, for example relegating the methods to the end, as they are less likely to be read. Works of non-fiction are often read once in order, then used repeatedly to access short sections from them without any regard for their structure or sequence.

When moving from text to hypertext, other structures become more feasible, including multi-dimensional spatial structure. These can be difficult to implement with the relatively crude tools of straight HTML: examples include my own accounts of multiple paintings made over time of the Piazza San Marco in Venice, and the Palace of Westminster in London.

Moving away from the physically linear structure of books, many good websites become densely interconnected maps, giving the reader a very large number of options for reading order. The classical works of non-fiction hypertext such as the In Memoriam and Dickens Webs are excellent examples of that.

Non-fiction can also be strongly narrative, using any of the narrative forms used in fiction, although books are most generally near-chronological.

I am sure that you will be able to suggest other common structural forms in non-fiction.